Telling God What You Think of Him 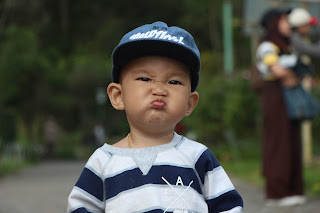 You know what's odd? Teaching my children good ways to express their dissatisfaction with something I gave them. That seems backwards to me. I'd rather they kept it to themselves and in the long run, they'll need to learn that. I don't mean to raise rude children. But at their age, I've found that worse things happen if I try to shut them up, like they hit me or destroy toys or burst into tears and run out of the room. I have to teach them how to handle their dissatisfaction.

You know what else is odd? Teaching them how to voice their anger towards me. I don't particularly want to hear that either. I also don't want to comfort them when they're accusing me of hurting them or hear about their totally unfeasible fears.

Listening and comforting and naming what's going on inside of them feels like I'm giving them a stick and saying, "Here, hit me with this! Tell me how inadequate a parent I am and list all the ways I hurt you and I can't protect you."

If I can recall in the midst of their outbursts that I wasn't meant to fulfill all my children's needs for safety, love, and power and that only God can, I can usually survive their verbal outbursts without feeling threatened or ashamed or frightened. Sometimes, I can even turn them into teachable moments. But let me tell you, that is a difficult thing to do. Too often I cut them off or shut them down or rush on to the next activity due to my own insecurities. This usually results in them spending their anger or fear or sorrow in other ways, like eating sweets or picking on one another or biting their nails or making cutting remarks.

This has caused me to wonder how God feels about our self-expression. I wonder if he ever feels like we're hitting him with the stick he gave us. After all, he gave us language and breath and beating hearts and throbbing pulses. All the equipment that we use to blame him and question him and doubt him, he gave to us. But I think God can take it. In fact, I think he wants us to come to him with our fear and rage and sorrow.

The alternative is to hold everything inside like the prodigal son's brother. He looked okay on the outside, but on the inside he was building up resentment and angst and hurt feelings. Eventually, these sort of people leak out what they're holding inside in the form of self-righteousness or impossible demands or envious criticism or isolating themselves or non-stop video games or being addicted to social media or endless acquisition of material goods.

The prodigal son didn't try to hold anything inside. He didn't want to behave so he told his father what he wanted and if his father didn't like it, that was his problem. These sort of people can seem offensive and often make life-altering mistakes. I also don't think they're usually welcome in clean and tidy churches. But I kind of think they have the right idea. If we're not happy with God and how he's running this show, tell him.

That's how Jacob in the Bible did it. He wanted a guaranteed blessing from the Lord so he wrestled him for it. Likewise, if you aren't getting what you want, have it out with God, wrestle him. Give him your complaints. Tell him you think he ruined your life. Tell him he's not protecting you the right way. Tell him you can't do life anymore; it's too hard. Tell him the way the world ought to be. Tell him to his face you don't believe in him. He can take it.

And then brace yourself because he has promised to show himself to those who seek him, and he does.

“Brace yourself like a man,
because I have some questions for you,
and you must answer them.
Will you discredit my justice
and condemn me just to prove you are right?
Are you as strong as God?
Can you thunder with a voice like his?
All right, put on your glory and splendor,
your honor and majesty.
Give vent to your anger.
Let it overflow against the proud.
Humiliate the proud with a glance;
walk on the wicked where they stand.
Bury them in the dust.
Imprison them in the world of the dead.
Then even I would praise you,
for your own strength would save you."
(Job 40:7-14 NLT)

I really loved this one, Abby.

Need to think on this myself. there's certainly something I'm not verbalizing or even allowing to surface that I don't like and that