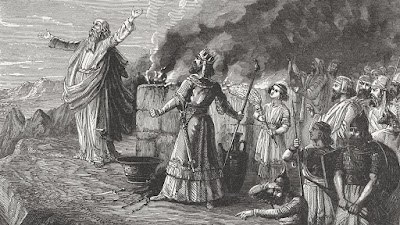 "Collie Knox (a British author during WWII) tells how once a well-loved chaplain said to him, 'Young Knox, don't make an agony of your religion.' It was said of Burns (Robert Burns, I assume) that he was haunted rather than helped by his religion. The Orthodox Jews had an idea—not altogether dead—that a man was not being religious unless he was being uncomfortable." (William Barclay, The Daily Study Bible: The Gospel of Luke.)

Do you ever feel like you're not suffering enough to be considered a good Christian? Every once in awhile I start feeling guilty about having so many modern conveniences or being able to stay home with my children while Philip, my husband, works or for writing my fictitious novel instead of cleaning the house or for being too relaxed about COVID regulations or for not doing more things for/with my children.

In response to the guilt, I often resolve to make more sacrifices to compensate for my "good times." It's a ridiculous balancing game that goes on in my head, and it rarely goes well.

See, after I decide to do better, to give away extra clothes or listen to my children more or only purchase used furniture or use the clothesline instead of the dryer, I look around and notice that other people seem to be having more fun than I am. I can see it as plain as day on Facebook. They don't seem to be working as hard as I am or having quite as much trouble. How dare they! Why aren't they making the same sacrifices as I am? Aren't they real Christians?

Sometimes I get up on my holy horse and ride around town a bit. This usually leads to judging others or praying for them in odd ways or trying to convict people of their poor life choices or trying to teach them God's will for their lives.

Eventually these attitudes run their course. Something breaks through my hard shell: a passage of scripture, an example in a book, or a convicting sermon.

“One of the marks of a certain type of bad man is that he cannot give up a thing himself without wanting every one else to give it up. That is not the Christian way. An individual Christian may see fit to give up all sorts of things for special reasons--marriage, or meat, or beer, or the cinema; but the moment he starts saying the things are bad in themselves, or looking down his nose at other people who do use them, he has taken the wrong turning." (C.S. Lewis, Mere Christianity)

Next, and rather like a bucket of ice water being dumped on my head, the Lord peels back the scales on my eyes and shows me what was actually happening in me. He shows me how I've been giving up what I want to do not out of love for anyone but to earn a measure of happiness or safety or approval or time free of obligations. I have, in fact, been making sacrifices like the ancient Jews once did, giving God the right animals at the right time while hoping all the while that I can still have my own way . . . a moment to myself, a longer life, well-turned out children, recompense for all my troubles.

To continue operating this way is to murder to the soul. Making a man do what is not in his heart is a sure-fire way to killing his spirit. It is forced labor, slavery actually. And slavery produces robots, zombies, if you will.

I don't mean we ought to abandon all self-sacrifice and just do whatever we feel like. That way leads to hell too. What I mean is, let us not be deceived into thinking that our sacrifices are the real thing. Our sacrifices, just like the animal ones, are merely placeholders until we remember that this doesn't work. We've tried it before and we know where it leads.

Then, because we know our sacrifices don't work, we cry out to Jesus to be in us. Be in me Jesus. Remake me. Help me to want what I ought. Change me to desire the will of God because right now I don't.

Then, quite often, we see how our original plans weren't God's way after all. What we thought was the best way to love our children or friends or spouse might be quite different than how God wants us to love them. What we thought was pleasing to the Lord, ended up stinking like a slaughtered animal on an alter. And what God wants most of all from us is what we have, until now, withheld from him: our hopelessness in our own abilities, an utterly surrendered heart.

"For you will not delight in sacrifice, or I would give it;
you will not be pleased with a burnt offering.
The sacrifices of God are a broken spirit;
a broken and contrite heart, O God, you will not despise."
(Psalm 51:16-17 ESV)