By Abigail Joy Stevens February 23, 2009
The Camilia bushes have been shedding their blossoms like my parent’s plum tree in August, and the blossoms are no less messy than the fallen overripe plums, which congeal with the gravel on hot summer days.

Spring fever is spreading through the seventh and eighth graders, and the teachers know this is equivalent to a rainy or blustery day in the classroom. The boys are now competing for the title of class clown. They compete with uncalled for comments most of the time, but sometimes the competition includes bent paperclips, the automatic pencil sharpener, a re-shaped coat-hanger (where did the little brute get that one, certainly not from the teacher’s supply room), a foot-long pen, paper mache finger extensions, rubber bands, the occasional cell phone, and dissected pens rebuilt as rocket launchers. I must not be giving the little animals enough activities to occupy their time. I don’t hesitate to take away their gadgets and put them up for sale—the price is a few bonus tally stickers. So far no one has bought back the foot-long pen.

Philip and I have continued running in the dark before work. We set the alarm at 5:25 am and force ourselves to get up and throw on our running shoes. Another part of the world is awake at that hour. An old robed figure—I can’t describe him much more than that because it’s too dark—smokes a cigarette on his back porch. Several over weight ladies walked consistently for a week, and then their New Year’s resolution lost its motivation. A man in his mid-twenties stands at the curb waiting for his ride on Hadley. He chuckled at us the first time I zoomed by on my bike, hollering to Phil to hurry up or else we’d miss the light. My knee has started to bother me, so I ride my bike now. It’s hardly the workout I got before, but I’m still panting and puffing at the top of Orange.

Robin and David Cox—our landlords, neighbors, and relatives—inspired Phil and I to get bikes. We had such a surreal ride through Yosemite after the rain cleared out the tourists on our summer vacation. The deer were out in the misty meadows chomping on grass and the grisly bear was waddling through the wet woods. Until Christmas we couldn’t justify spending over $300 for a beach cruiser that we’d probably have to store in our living room. But our grandparents on both sides gave us some Christmas booty that we set aside waiting for a find. I reclaimed my rusty mountain bike from my parent’s garage, and before long we found an ad in a Big 5 catalogue for a 7-speed beach cruiser for $119. A little assembly, a little brake adjusting, and there you go. We’ve taken the Whittier Greenway trail twice now. Once we took it over the bridge at 5 points, which has been decorated with artsy metal wind mobiles. I was tempted to ride it here to Starbucks today, but we don’t have a bike lock yet.

The characters in uptown could be several chapters in a novel all by themselves. Oh my! A man in bright yellow Sunkist pajama bottoms is walking his albino pit-bull across Philadephia with a white snake around his neck. An old man in sweats and a sports jacket is pushing his own wheelchair down the sidewalk. A group of men are taking ownership of Starbucks with their confident loud voices. One of them dressed in a striped blue dress shirt hands a scroll of blueprints to a contractor. They’re pointing to the walls and scribbling notes onto a pad of yellow paper. The chalky announcement board on the wall tells me that this Starbucks will be closed for a week during a brief remodeling. These are the men who still have jobs. These are the men whose confidence relies on the momentary work at hand, but what will tomorrow bring?

Phil’s work —Land Concern—has felt the lack of business. The company laid off almost all of Phil’s co-workers, the receptionist, the cleaning lady, and the office plant maintainers. They work four days a week now and have signed up for the various cleaning jobs around the office. Phil vacuums. He’s found private side jobs to keep him drawing at home on his Friday’s off, and I’ve been asked to do more work myself. Three families have asked me to tutor their kids in the last month. I’m annoyed at the demands of my time, but I can’t deny that someone’s looking out for our financial state. Must everything be cushioned for us? I was ready for hard times, just so long as I get my English Breakfast tea in the mornings and my Saturday mornings for writing. A heater would be nice too and maybe some gingersnaps from Trader Joes.

At home depot last Sunday Phil and I were gaping at the price tag on a circular Tiffany’s ceiling lamp. The cheapest lamps that size that we’d found online were no less than $100. This lamp said $19. “They must have forgotten a zero somewhere,” we said to one another. We called in the worker who perched atop a ladder showing us his underbelly as he pulled down the lamp for us. I peeled back four layers of price adjustment stickers. The lamp had started at $136. Then it dropped to $129, $95, and $57. Now it was $19. The woman at the cash register said we could sell it for hundreds on ebay. We could, but we’re going to have H.K Maynard install it above our dining room table instead. It’s now part of our February finds collection.

The last item is not currently in our possession, and I highly doubt it will ever be. We call it the barn, and its located on California and Mar Vista. It’s way out of our price range, but fits right into our dreams: two rentals on site, a two-story three car garage, plenty of nooks for planting, an office… and $800,000. Maybe it will be March’s find. 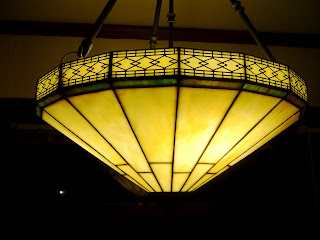 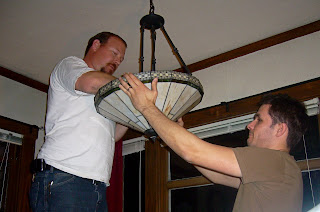 Jonalyn Fincher said…
Really nice to hear about things you've been finding, treasures you've unearthed.
Today I bought your Christmas present. Can't wait to give it to you!
What have you been writing on Saturday mornings?
February 24, 2009 at 5:44 PM

Abigail Joy Stevens said…
Oh my! Christmas already? I used your crock pot for the first time today. It's making our soup as we speak.
I like to write my young adult fantasy stories on Saturday mornings. It's my fun writing
February 24, 2009 at 6:44 PM

Great Aunt Gretchen said…
Lovely dear! That lamp is BEAUTIFUL!!
So glad you told me (again) about your blog. I'm sure glad I taught Philip how to vacuum.
Although, I didn't realize he would get paid to do it!
Sounds like you like to "people-watch" too. It's one of the favorite Seelye Family activities.
Love your list of gadgets our 7th graders are coming up with. Unfortunately they also bring them to study hall and torment me with them. :-(
Love,
GS
February 24, 2009 at 9:09 PM