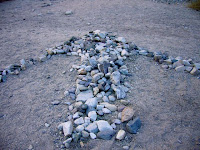 The rocks in the dry riverbed sand were clear. They pointed to the left. Phil and I simply didn't think it was referring to the direction we were supposed to take. We didn't think much about the arrow at all. Our conversation went something like this: "Oh look! An arrow!" "Give me the camera. I'll take a picture of it."

We continued up the riverbed of 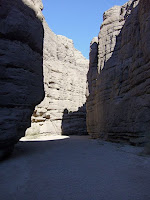 Painted Canyon and didn't think twice about all the people we passed going the opposite direction until we spotted a ladder scaling up a stripe of white rocks on the side of the canyon walls. We decided to ask for directions from the next group that passed us. The couple seemed confused about how we'd gotten there. "We just walked up the dry riverbed," we explained.

"You didn't climb up the ladders?" they asked us. "You didn't come up Ladder Canyon? Did you see that big arrow in the sand?"

For some reason they couldn't understand that neither Philip nor I had made an executive directional decision not follow the arrow. They assumed it must be someone's fault. No big deal. We were only hiking the trail in reverse, which meant we would climb down Ladder Canyon instead of climb up it.

At the top of the riverbed we hiked down the spine of several ridges before heading down a gully that turned into a chute that became a twisting curving canyon, shaped by the flash floods that have scraped away at the sedimentary walls. And around a dozen curves we finally came across the ladders that gave the canyon its name. These metal ladders finally took us back down to the big arrow that we'd photographed two and a half hours earlier. 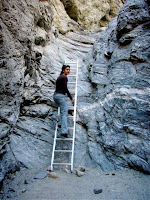 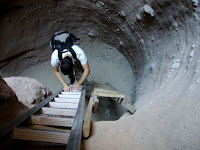