Phil's Projects & the Battle with Taurus 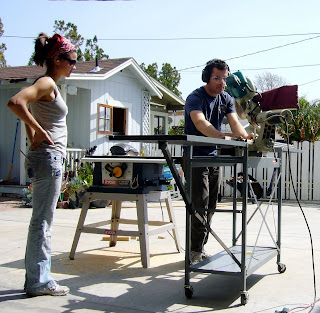 Philip and I are project people. And since we have a house with endless tasks, sometimes the projects come and go faster than we can report. Here's an appetizer of all the activities.

1) Phil's been putting together a succulent picture. He made the frame out of scrape wood, scrounged around for some chicken wire—he got some from Ed Morsey and found the rest covering a vent on our house—filled it with soil, and inserted the smallest succulents we have. He shoots the thing with a spray bottle everyday to water it. The final product will hang on the wall and supposedly won't fall apart because of the roots. We'll see about that one. In the meantime we've got to let the thing sit for 6-8 weeks before it's ready for vertical hanging. 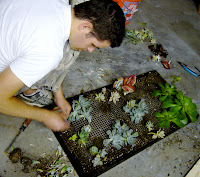 2) Our little laundry shack needs attention, so I took on replacing a rotting roofing board. I learned: that roofing has fiberglass in it so wear gloves, that each sheet of roofing is nailed in below and above the next overlapping shingle, ship-lap is different than tongue and groove, and Phil's battery operated saw isn't as difficult to use as it looks. 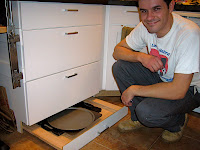 3) Phil constructed a wafer-thin drawer that fits beneath our drawers in the kitchen. He thought it, drew it, and built it out of scrape wood. I fit my cookie sheets and griddle in it.

4) Phil also sliced a hole into the side of our microwave cabinet because the convection oven feature was making the laminate peel. Home Depot already replaced our cabinet doors for free, but they started to peel again, so Phil made a heat guard and cut a vent. (See video) He bought this metal nick-knack from the "as is" section of Ikea and used it to cover up the ugly hole he made, because it was as hideous as Gollum.


So what am I doing, if Phil's working full time and doing cool projects? The biggest project has been sanding and painting the exterior stairs. Along the way I found dry rot and termite droppings in countless places, and I made phone call after phone call to the termite company who ensured the place was free of these problems. They dutifully came out to fix their errors, claiming that they didn't search the place with a fine tooth comb.

After one of their many visits, they had to come back again and repair a section of previously repaired wood that just crumbled apart when I stuck a screw driver into it. Alright, I'll excuse one error, but it didn't stop there.

When a deck-em guy was inspecting our stairs to give us a quote, he pointed out that the real landing was hidden underneath a veneer. The veneer hid large quantities of dry rot. My blood started to boil especially when the termite people admitted that they'd covered it up per the previous owner's request. So... you have no backbone is what you're saying. You just do what you're told even if it's dishonest. But I let this one slide again.

While poking around yet again, my screwdriver sunk handle deep into the back of a stairwell's post: a place that the termite guys had already repaired. That was the last straw. I called them up and politely said I'd found more dry rot.

"Shall I have my guys come out to fix it? I don't feel I need to look it over cause we've been there so many times," he said.

"No. There's a couple other things I'd like to show you," I said nicely, but I was working together the speech in my head.

Face to face with Mr. Taurus Termites I gave him a false sense of security. I pointed out several more spots of termite droppings and a mild repair of dry wrought. Then... I lay down the law. It went something like this:

"You know, you guys have had to come out here to fix your errors twice now. First there was that beam in the front of the house, which just crumpled to pieces and ants were making a nest in there. And then I uncovered that dry rot on the first landing where you guys just covered up all the damage. Now you're having to come out again cause your guys did a bad job. So I'm wondering: are you just dishonest or do you do crappy work?"

Mr. Taurus Termites said nothing, so I went on.

"When your guys were out here fixing this post I reaching in and felt it before he filled it with bondo, and it was wet. You can't fill a hole until it's dry, but your guys did it anyway. I'm a 26 year old woman. I'm a new home owner. And I now know more about fixing dry rot than your people do who do this for a living! What's wrong with this?!"

If I wasn't a Christian, I would've pulled out my pepper spray next and shouted, "To hell with your company!"

Their slogan is: "No bull. Just good service." But I've got some better slogans for them. I don't think they're interested.

Nancy M. said…
Ah - the joys of being a "home-moaner". Hang in there, my friends.

Great Aunt Gretchen said…
Preach it Sister!! Shoddy workmanship is SO frustrating!! Keep makin' them return to fix their crummy work!
I love Philip's drawer-what a great use of every inch!"Sweat-equity" is rightly named! :-(
Gretchen (Mom)
March 27, 2010 at 9:38 PM

Great Aunt Gretchen said…
Have you thought of reporting them to the Better Business Bureau and writing a bad report about them online? Grrrrrrrrrr!
GS
March 31, 2010 at 10:22 PM