The mocking birds were busy all-night and so were we, but I don’t think our neighbors heard us as kindly as they did the chirp-chirp, whoop-whoop, and deedoo-deedoo of the mocking birds. Our noises went more like ratt-tatt-tatt, errrrrrr, bang-bang, twang, vroom!

Our four-car garage is becoming a two-car garage so our renters can have a garage space of their own. This is good for them, but tricky for us. We’ve shifted all our household items, unused furniture, and tools to one side of the garage. How in the world did we accumulate so much stuff? I felt the sudden urge to get rid of things, and Philip was kind enough to let items go for unreasonably low prices.

Craig’s list was the mode: a hanging microwave that came with our stove for the front house ($25), our mini-fridge that we took off Luke Shackelford’s hands when he moved out of Jacob’s ($35), a full-sized fridge that Robin and David gave us after we left Beverly ($40), Dale’s childhood book shelves, desk, and nightstand ($50), and the hottest item: our industrial steel roll-up garage door ($20). This last item was probably worth the most and was without a doubt the most interesting to see go. Our ad read like this: 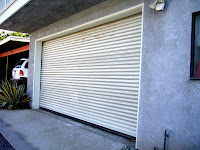 “Full sized 2-car garage door. Spans an 8 foot tall, 16 foot wide opening. I've had several garage door installers tell me this is an expensive garage door. It's called a Porvene Roll-up. Check out their website at www.porvenedoors.com. It does not have a motor, but it looks like the attachments are there to hook one up. I'm replacing this door with two individual garage doors that look less industrial, so I just want to get rid of it. If you can take it down and haul it away, it's yours for $20.”

The takers were a MacGyver-like character (Ben) and his methodical side-kick (Mike) who contrived and built contraptions to lower the alleged ±900 pound door onto two V-shaped dollies and load it into their truck. They came, took measurements, pictures, paid for the beast, and promised to return before the end of the week to claim their purchase. Phil and I were curious to see what they’d come up with.
Their original plan was to coerce 5-10 friends (or enemies) into lowering the thing to the ground, but after they saw how high it was and how much it might weigh, they put their heads together and came up with a plan for two men and lots of tools.
Winches: two winches secured on two beams angled against the ceiling at X degrees and kept in place by a frame of 2 x 4’s that stretched out the open garage and connected in the middle. (My what a lot of prepositional phrases!) The video perhaps explains the contraptions better than I can. 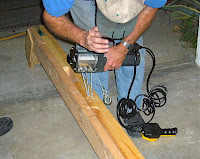 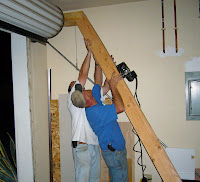 Phil and I pulled our barstools into the garage. I popped some popcorn, and we watched out film, which began at 9pm. By 11pm the plot had thickened, but the popcorn had run out and the hammered drill was off limits. I hope our neighbors remember that bag of avocadoes I took them last week before they come knocking on our door. 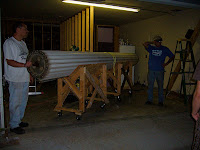 By 12:30 the door was in its cradle and on its way to the truck where our Craig’s list buyers made a 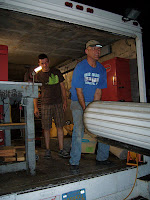 disconcerting discovery. One man could pick up one side of the door all on his own. Certainly five guys on ladders could have lowered it from the ceiling. Oh well; what’s done is done. They secured it in their truck (which wouldn’t close all the way because 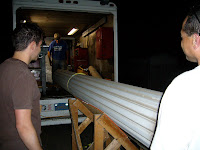 the door was too big) packed up their tools and left Phil and I to board up our garage and finally hit the pillow around 1:45 am. No complaints from the neighbors yet.