Sight to the Blind 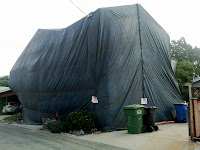 My Irish Breakfast tea tasted like Lawry’s Taco Seasoning the morning we came back from our vacation. The tea and the seasonings were zip locked together during the fumigation. The apple jelly’s top wasn’t on all the way, and it dripped down my loose-leaf Oolong bags and pooled on the bottom of the plastic sacks; and the bottle of picnic-sized balsamic vinegar leaked black dots on my spice jars.

The burning-red Kangaroo Paws that I’d planted below the freshly painted staircase don’t look like they’re going to make it. Their leaves are half crispy; their flowers, all faded. The Boston Ivy is a stubby bush again; all its fingers that had crept over the ugly wall outside our studio door are chopped. The furniture was sprinkled with dust; dust bunnies rolled over the laminate flooring upstairs.


I guess nothing can be good after coming back from a vacation like that. Nothing at all.
Phil and I have been suffering from post-vacation blues. I want to see the mountains again. I want to hear the sea lions barking from the backyard, smell the pines and the salty ocean, and see deer on an afternoon stroll. Dear God come back now!

The alley trash-diggers, our tenants’ riotous laughter at the T.V., and this tiny home with windows that aren’t big enough doesn’t make for a happy homecoming. I’m alone now, but every day of our vacation I spent with family. 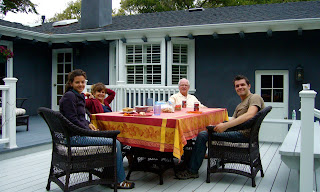 We drove over the Tioga Pass, into Yosemite where we stayed for 4 nights with the Coxes, Stevens, and Deharts, then we drove across to Monterey and stayed with Ed and Barb Dickenson (My Grandpa Taylor’s cousins) and Terri for two nights.

We ate home cooked meals almost every evening, breakfasted at the Ahwahnee Lodge, stared into the fire listening to family jokes, tasted the soda springs water, felt the mist of Yosemite falls on our faces, soaked our feet in the chilly glacier melt, biked through Pebble Beach Golf Course, watched a whale breech off the coast, toured the Aquarium 30 minutes before it opened, and drank tea by the Dickenson’s fireplace. 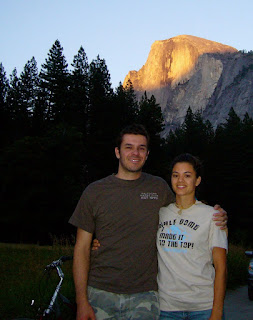 I’ve not forgotten Half Dome: that 15-hour leisure stroll up misty rock-stairwells, alongside gushing tributaries, and under the beating sun. My shoulders have just begun to peel and my ankles are still numb from where I deadened the nerves from tightening my boots too tight. Tom Cox was our patient guide who never ran out of topics of conversations, and Kirk Stevens set the pace, taking one step at a time. 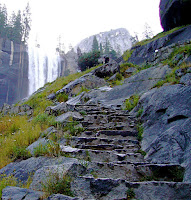 I don’t see how I can talk about this hike. I can share the facts: we started at 6 am, took breaks every other switchback, ascended the cables in an hour. I felt queasy holding my camera over the edge for a picture; the Mahogany Smoked Beef Jerky hit the spot; my contacts went blurry until I washed them with saliva; one by one we ran out of water; twilight fell; we biked back in the dark; the Deharts kept dinner hot for us; the line for the women’s shower was ridiculous at 9:30 pm, and Gretchen bought us T-shirts the next day.
But how can I tell you about the goal itself? 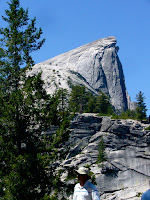 You see, before the dome I talked with God. However, the trouble with praying about Half Dome was having prayed for humility several months ago. How could I ask God to give me humility and then in the next breath, give me Half Dome? I was afraid God would honor my request for humility over my request for Half Dome. 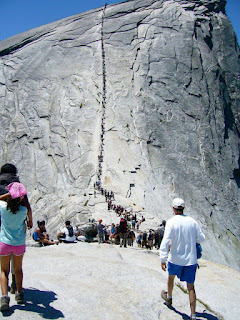 I imagined how God would do it: a sprained ankle, altitude sickness, or maybe we’d all have to turn back like Kurt Plubell did when his daughter couldn’t make it. I imagined God toying with his torture devices, wondering which one he might use. Because humiliation gains humility right? That makes sense.

There were pauses enough to snap some photos. And at the top we celebrated that we all made it together: all four of us! Kirk called Grandpa Stevens. I ate an apple that Phil had carried in his camel pak for me. We rested, but weren’t restful knowing we still had to descend and it was about 2pm. 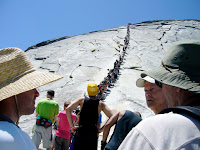 The trek down was a blur and not just because the sun was setting and we were tired, but because my contacts started to dry out and everything went into a fog. When we were 9/10ths of the way down I tried the old spit trick and I felt like the blind man that Jesus healed. The trees, rocks, and falls had a form. I could see! That sight was more glorious than the view at the top of Half Dome.

I think I’m saying something profound, but my mind is running circles around it. What did you do God? How have you opened my eyes? What was glorious? I think I need to think on it some more. 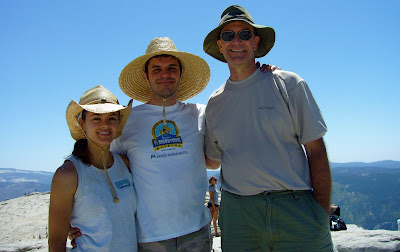 Heidi said…
Humiliation and humility definitely have the same root word, but I think that the humiliation that brings humility happens when we walk in pride. God loves to give good gifts, and I think your vacation and Half Dome accomplishment were a gift from Him. I'm so glad we got to spend part of it with you!
July 30, 2010 at 11:25 PM

Great Aunt Gretchen said…
Thank you Abby or being such an encouragement to Kirk all the way up & down! You're a dear & a trooper! Kirk said you are like a gazelle, climbing those mountains!
G
I'd like a copy of your group picture!
August 1, 2010 at 9:01 PM

Grandma Seelye said…
Thanks for your GREAT report and pictures!!I'm so proud of you all(in a humble way of course). I agree with Heidi on that subject.I'm so happy that God gave you that opportunity. Love you.
August 5, 2010 at 8:33 PM

Jonalyn Fincher said…
I loved reading about your adventure. Made me miss Ed and Barb and Pebble Beach... made me want to see you and Phil and go on an adventure with you both.

The list of things about Half Dome climb reminded me of so many of journal entries these days, lists of memorable things, written in a half stupor of fatigue.

This also reminds me of climbing the 14er exactly 1 year ago.. pregnant, nauseated and very very proud!:)

So did you come to new ideas about humility?

I'd love to talk/skype with you sometime about some epiphanies i've had with God about that word...email me a good time this week if you're up for a skyperama.
August 8, 2010 at 12:49 PM