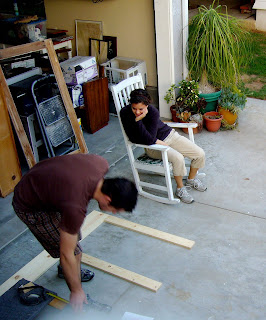 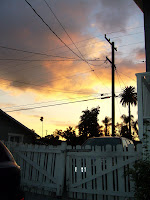 Tonight Phil and I watched the airplanes as we constructed a frame for our bathroom mirror. The cumulous had the weatherman telling us it would rain, but we didn’t feel a drop. The planes however were unusually low. They wove in and out of the clouds as we watched. Phil and I felt like we were whale watching in Baja, except we gazed up for a glimpse of a 747’s belly. 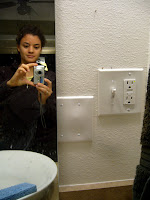 The weather was perfect for being outside: sunny and blustery. But we spent the morning indoors trying to figure out how to move a light switch and plug over 5 inches. The original switch/plug location was directly under our off-centered bathroom light, which is next on the list to move. Our plan is to hide the old light hole with our mirror frame. But this meant we had to move the old switch/plug over 5 inches.

We had a pretty good idea how to do this, but when I pulled off the light/plug cover, I found madness. I drew a detailed diagram and called my dad before trying to do anything else. He made sense of it and helped Phil and I perform the transplant. The blank cover over the old switch/plug bulges with all the wires jammed into it. 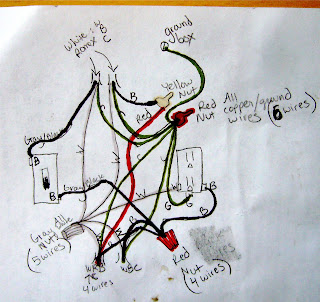 After the operation we enjoyed the gorgeous weather. With grocery bags in hand we walked Beverly, Alta, Hadley, Greenleaf, and Camilla picking up trash as we went. Phil has wanted to take a trash-walk for a while. Today he remembered to bring a bag. Candy wrappers from Halloween were the top item, closely followed by cups, straws, and little pieces of fabric. We also found shreds of a pink feather boa, a goblin glove, and half a toy motorcycle. We should do that more often.

After the walk we read some Louis L’Amour. Kurt Plubell’s report on L’Amour at book club got Phil and I started. L’Amour’s books are full of sword fights, narrow escapes, and manly-manness. I enjoy a good man book; they give me ideas on how to keep my Junior High boy’s engaged in my Math lessons. My most recent ideas caused one student to exclaim: “Ah! My Math teacher keeps a knife in her desk!”

It was true. For one week I kept a knife and cutting board in my desk for a demonstration on decimals. Last week I brought Phil’s ratchet set, Allen wrenches, and drill bits to explain comparing fractions.

While I hate having to teach fractions and decimals—why didn’t these kids learn this in sixth grade—, these topics are perfect for visual aids. Later we’ll measure objects around the classroom with IKEA measuring tapes. Then we’ll taste test cookies that the students create after dividing the ingredients in half.

After making the frame for our bathroom mirror today, I think I’ll ask our principle if I can bring a Mitre box and saw to school. Building their own frames will be an excellent fraction lesson.

Great Aunt Gretchen said…
And THAT'S why you're such a great math teacher!!! I love your creative ideas! I'm sure the principal won't mind. :-)