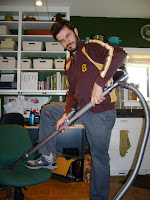 The first thing Phil did after we got home from our Christmas celebrations was vacuum the studio. Phil’s been asking for a Dyson since we got married and this year all his wildest dreams came true. The old-fashioned Hoover Elite wasn’t good enough for him—something about the canister and bag reminding him of his childhood vacuuming chores. 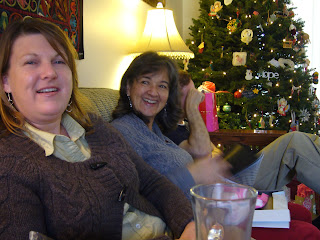 The first thing I did when I got home was go into a semi-panic about the clutter from the Christmas loot. But after 2-3 days of rearranging, shifting, and throwing out old stuff, the house is back to normal and I’m sad. The traces of Christmas are starting to blend in with the rest of my house. We received such wonderful gifts. Jessica gave us two plants that sit on top shelves and will one day cascade. Terri gave us new bathroom towels, which inspired Phil to go buy towel hangers, a soap dispenser, toilet paper holder, new shower curtain, and a $5 mirror that looks like it’s from a fun house. My tea basket is full to the brim with teas that Jacob, Thorpé, Mommy, and Mom (my new name for Gretchen) got me. 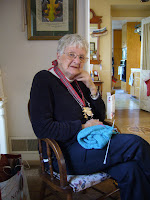 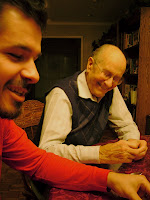 After Phil had nothing left to vacuum, which was pretty quick, he played with his new GPS from Jacob. I lit the apple-scented candles from Thorpé and tried to think of a good place to put all the candy that Phil stuffed in my stocking. Maybe I’ll just leave it in my stocking hanging on the spiral staircase. We’ll purchase year-round rock-climbing passes with the ten-day Rock City passes that Terri gave us, and the cash from Grandpa Stevens and Grandma Taylor. 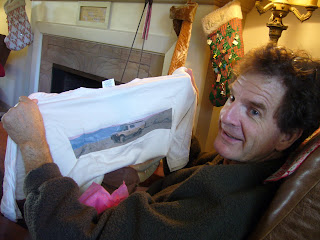 This year I was particularly proud of several handmade gifts that I gave: off-roading T-shirts for my dad and hand-dipped candles for my grandma. I also fabricated some craftsman style address numbers for Phil. These things are about $40 apiece online, so I made them myself out of wood.We’ll watch 3:10 to Yuma, thanks to Heather and Jeff; pull out Junipers at GHFC with the mega-loppers from Mom and Dad. And then visit the spa in my new workout suit. We are blessed beyond measure.
It was a different Christmas, slower, sweeter. Daddy was alive and that made the day extra special. He wasn’t his usual commanding-self, but he still sat in the captain’s chair and divvied out the gifts. There were tears, mostly from my mom at every other gift she received from an Aunt who believes in her technical savvy and my dad who loves her. And more tears from all of us when Thorpé gave us her good-bye speech and letters with personalized thank you’s. The last gift my dad opened was a pair of pants, the same kind of pants that were cut off him when search and rescue arrived after the ATV accident. So many thoughtful gifts opened in warm-living rooms… but now it’s all over. 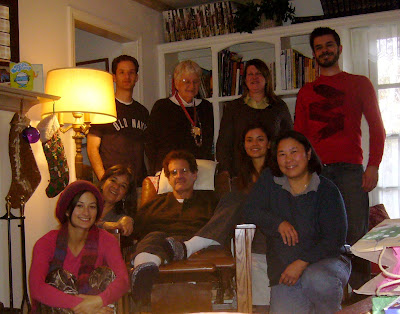 Great Aunt Gretchen said…
Thank YOU for donating to World Vision in my name. That is my language of love. We love the new monikers too, Mom & Dad from you.
We are blessed to have YOU part of OUR family!
Love,
Mom
January 1, 2011 at 12:01 PM

Grandma Seelye said…
A very special Christmas! We rejoice with you that Fred is alive! PTL
January 1, 2011 at 3:12 PM

Gretchen said…
Thanks for a lovely description of a slower and sweeter Christmas.
Aunt Robin (Gretchen used this computer recently, I guess!)
January 3, 2011 at 8:35 PM