By Abigail Joy Stevens July 16, 2011
The body can’t know rest, unless it has first known work. Real work. Work that stings your eyes with sunscreen and salty sweat, that sends rivulets of muddy water down your shower drain, that transforms bottled water into sweet life-giving nectar, and knocks you out less than five minutes after your head hits the pillow.


This is the drumbeat of my summers. Early Saturday mornings with my CRV back seats laid flat to make room for shovels, digging bar, and grade rake. Hot tea in one hand with my other on the wheel; Phil shifts for me. At Granada someone brings donuts, usually Tim White or Bob Miller, and I always try to eat one, never learning from all my past donut-eats that when I’m half-way through, I ask myself why did I take one of these horrible rings of sugary dough.

I lace up my old hiking boots, the ones that hiked 2/3 of the John Muir trail ten years ago. The toes are scuffed to a lighter shade of brown, and if I lace them too tight, I give myself a welt on the ankle. They are water proof, slip proof, bash-yourself-in-the-toe proof, but not fine-dust proof. Before noon I can feel the grit between my sweaty toes. But they are far better than converse, flip-flops, running shoes, and any other footwear that I’ve seen volunteers show up in—except Kurt Plubell’s steel-toed boots, but then again, who can outdo Kurt when it comes to equipment and gear? 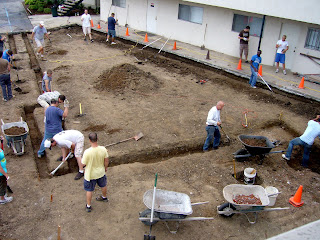 Before anything in landscaping can be done, first there’s the digging. There’s always digging; there’s no way around it. Taking out plants, dig. Installing irrigation, dig. Switching out a valve, dig. Fixing a leak, dig. Planting, dig.

We come to a smooth plot of grass and tear it up until it looks like a gopher’s heaven and we’ve put piles of clay soil in the parking lot and tracked mud all across the sidewalk and cemented a crust of dirt onto our shovels. There’s no way around the digging and there’s no way to look at a finished project without feeling jabbed in the ribs by the memory of the digging. Maybe a year or two will make you forgot, but this isn’t like child labor. You remember the digging. You remember the mini-avalanches of fine earth backsliding into the perfect hole you just dug because you stepped too near the edge. You remember the inverted pendulum swing of the pick mattocks overhead, and the labyrinth of pipes that’s hiding underneath those healthy plants. 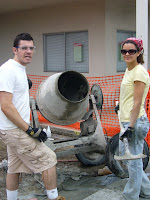 There’s dirt under my throbbing fingernails. They throb from gripping handles tightly. And I’ve bruises on my arms and legs, but I don’t know how or when I go those. General fatigue from the gut is the least I feel when sitting down, but as soon as I get up, the stiffness is like trying to walk with my legs taped straight.

Perhaps the worst part of it—unless I’m planting—is that at the end I can’t look back at what I’ve done and admire the beauty of my work. No. I’ve made the ground look like Swiss cheese. It looks worse now than it did when I started. It’s like organizing your dresser. First you take everything out and clean the bottoms of the drawers. But the day’s work ends there, and on Sunday’s the people file by and look confused. What is this supposed to be? What are all these holes?

I guess any average Joe would feel the same way if his house was raised and he saw all the under guts of ABS drains, Verizon cables, copper pipes, and support braces. I think that 75%—no 85% of redoing the landscape happens under the dirt where no man, woman, or child will ever say, “Oh my! What a fine PVC gluing that is!” or “Look at how deep you dug that hole! It’s amazing!” 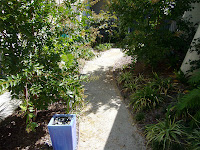 I don’t want the praise, I want the beauty, but no, that doesn’t come until the plants go in, and when they do, the beauty grows and grows every week. The Crape Myrtle is blooming! A hummingbird drinks in our fountain. The Boston Ivy has taken hold! The Spider Plant is trying to spread again. Should we cut back the Kangaroo Plant?

Is it funny or cruel that God does the best part of it? And isn’t it exactly the opposite in our furrowed and torn up souls. God is laying the lines for new drainage and better irrigation. He digs the holes, he plants the plants, and then we take charge of the garden, trimming here and there, watching the plants grow, dropping chlorine tablets in the fountain, raking up the fallen leaves. All of it is useless without the pipes that are running beneath that dirt. But no, I don’t think that’s quite right, because just when I think my garden is right, there he goes with the demolition hammer, chiseling away what I thought looked lovely.

C.S. Lewis says it better than I, naturally.

“Imagine yourself as a living house. God comes in to rebuild that house. At first, perhaps, you can understand what He is doing. He is getting the drains right and stopping the leaks in the roof and so on: you knew that those jobs needed doing and so you are not surprised. But presently he starts knocking the house about in a way that hurts abominably and does not seem to make sense. What on earth is He up to? The explanation is that He is building quite a different house from the one you thought of—throwing out a new wing here, putting on an extra floor there, running up towers, making courtyards. You thought you were going to be made into a decent little cottage: but He is building a palace. He intends to come and live in it Himself.”

Grandma Seelye said…
I love your writing! And thanks for all that manual labor...a labor of love for God and his children.The project is beautiful!
July 17, 2011 at 9:21 PM

Great Aunt Gretchen said…
We can hardly wait to see the finished product. WE so appreciate yours and Philip's hard work at church. It's refreshing to see a young couple you"gets it" when it comes to serving others. So cool!
Excellent job Abby, as usual. :)
July 18, 2011 at 3:02 PM

josieO said…
I entirely enjoyed everything about this thought-provoking and honest post. Thanks for working so hard, Abby & Phil. I know we'll be the beneficiaries when we come home months from now and it's all in beautiful bloom.
August 6, 2011 at 10:30 AM