I felt it last night. It was like when your eye twitches involuntarily or when you see your pulse beating in the flesh of your hand. A kick. Maybe a punch. Phil felt it too. How are you able to do that? You’re just a little one. Most of my co-workers and friends can’t even see the evidence of you. I see them giving me the belly glance, and I’m so glad that I’m hidden beneath a loose shirt.
My male co-workers are already making their vows, “I just wanted to let you know that I will never touch your belly. I’m just not into that.” Female co-workers are bending over and saying in high-pitched voices, “Oh, oh, is that a little bump I see there? It’s about time.” And my students like to distract me from my Algebra lessons by ask questions like, “But Mrs. Stevens, what if your baby likes chocolate? You’re depriving him of nourishment.” One of my students has named it Bob, and as she leaves class everyday she says, “Goodbye Mrs. Stevens. Goodbye Bob.”
In as much as I wince at all the talk, I think it’s doing me some good. It’s like the temperature slowly changing in the pool, so I can get used to the water. My school knows that I’ll be gone in March. Grandma Taylor bought me pregnancy pants. Gretchen Stevens has offered to put together a pre-birth scrapbook. Terri looked into buying a full body harness for rock climbing. My co-workers ask how I’m feeling. Phil sometimes says goodnight to it… I mean… you know… the baby. Nope, that still doesn’t come easily. I thought after 19 weeks I’d be able to say that with more ease, but I can’t. Even while browsing through a baby magazine, I had to shut it on the pictures of childbirth. Ah! Too much information! I can’t believe this is going to happen to me!
I’d rather respond to all the attention with, “Nothing to see here. Carry on. Back to work. I’m just fine thank you very much. No I haven’t had odd food cravings. I’ve always loved pickled turnips and celery before bedtime. My feet have given me problems since I started teaching. And I have always had a bad memory and gas problems. Everything is absolutely normal; so carry on with your lives.”
I want to say that, but half my pants have gone into storage, and I often look at my belly button in the shower and think, “So this is what it’s like to have an outtie belly button.” I’m short of breath while singing in choir, I burp a lot, and certain parts of my anatomy have never been so big. And then… last night… a big strong whap to my stomach. Good grief?! Are you really that big?
The doctors said that I’d start feeling things around 20 weeks, but they also said that they’d measure my stomach every time I came in for a check up and they haven’t done that yet. So far they’ve just take my weight, blood pressure, potty, and then smeared jelly all over my stomach to listen to the heartbeat. As they rub their mini-iron looking device across my skin, I wonder if it’ll still be there. Then they find it, and Phil and I gaze at each other wide-eyed. Yep, it hasn’t gone away.
Phil has been taking off work to go with me to my appointments, and I’m comforted to have him there as each new doctor gives me their different health speech. This doctor says drink more milk and eat more meat. That one says don’t eat too much fruit. That guy said to take fish oil. The other one tells me all the abnormal things that are normal to feel: pain here, soreness there, pressure here, diarrhea, constipation… good grief, if I add that to all the troubles that others have told me can happen, I shouldn’t be surprised if my eyes turned blue and I grew a tail. I think the doctors would just nod and say, “Yes, that can happen sometimes.”
Unfortunately no one prepared me for a partially-torn rotator cuff. That’s not a symptom of pregnancy, but of rock climbing. Too much strain and now I’m grounded. I could try it again after the pain goes away, but then I’d either be risking falling from a sudden muscle spasm or ripping the cuff all the way. And I’d really rather not go through that pain again: four days on Ibuprofen and a week with no right arm movement. Phil helped me get dressed, and we switched cars so I didn’t have to drive stick shift. I discovered frozen food dinners at Trader Joe’s and learned which grocery stores will help me out to my car. 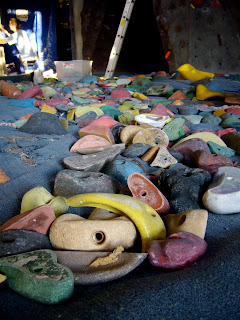 I’m disappointed. I felt smooth and capable rock climbing. Phil and I had worked our way up to bouldering level V3. Our fingers were strong and the calluses on our hands were thick. On one of our last visits we were sitting on the climbing pads with a group of guys who kept trying a particular tricky route. It started above a doorway with two smooth round handholds and no footholds. The next reach had to be done with all upper body strength. Phil and I watched the guys attempting it before we had a go. Phil’s big hands helped him grip the slippery holds, and he had plenty of upper body strength to launch himself to the next hold. Sticking the hold was the hard part. I tried a tamer method. I did the splits in the doorway and worked my feet up one by one until I could just reach the second hold. We grinned at each other afterwards. We love to climb. But now the dead yellow skin on my hands is coming off in shreds, and we take walks instead. Maybe one day we’ll go back.

Grandma Seelye said…
Thanks for sharing all these little gems of your feelings and thinking! Exciting days!
November 3, 2011 at 3:16 PM