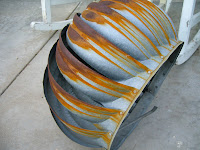 My days are punctuated by finding our spinning attic vent in our courtyard after a day of wind, teaching my students how to third an egg for a recipe, watching 4-year old cheerleaders march in the Whittier Christmas parade, snapping a shot of the agaves blooming at Laguna beach, creating a paper wreath from Phil’s old landscaping plans, finding yet another roadblock for the placement of the light on the bathroom wall, getting my next baby-bump picture taken by Mom, and reading about Communism in Wild Swans by Jung Chang. 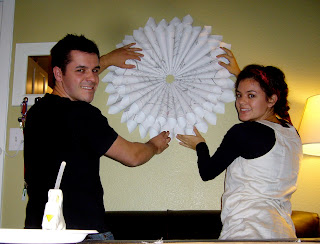 Sometimes the extra-ordinary happens: like having a group of men throw me a baby shower at my last trustees meeting. If only all baby showers could be like this one: two gifts, lemon cake, tea, and lots of discussion about church politics and the stage configuration. No games. No ogling at me or feeling my belly. Kurt Plubell discussed his bouts of morning sickness when he was pregnant, and Bob Deklotz was interested to know if he gained any weight. As was only fitting they gave Phil and I a Fisher-Price Drillin’ Action Tool Set. They said they weren’t losing a trustee, but making a new one. Afterwards I started to wonder, but what if the baby is a girl… no… I guess it doesn’t matter. The trustees have seen how a female worker can do some Drillin’ Action too. Hurrah to them! 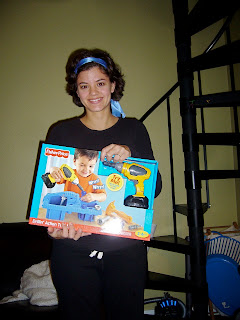 I will miss our meetings on Monday nights in the church workroom. They start with Kurt Plubell’s questions, “Well, shall we start the meeting?” “Tim White can you pray?” “Should we review the financials?” “Shall we take a look at the minutes?” Kurt says his job is easy because Tom Calderwood types up the minutes, Tim White leads the meetings, and Phil and Abby do all the work. However, he’s leaving out Bob Miller’s reports and Richard Tucker’s comic relief. We bicker sometimes and get real loud, watch You Tube videos and go off on tangents, but I never have to worry that after the meeting the guys are going to go home to their wives and gripe about so and so. No drama. Well… no drama outside the meetings.
However, I know I’ve made the right decision to go off the trustees. When I left I felt a pressure release. I don’t have to fix the garden fountain. I don’t have to cover the old gutter holes. I don’t have to retrench the bendy-board holes. I don’t have to baby-sit the watering schedules. That’s their job now. I doubt I’ll be able to go to GHFC without continuing to inspect the buildings though.

MommaMina said…
augh.. Bless those Trustees. What a great community you had there and what a 'joy' you have been to them. I know because they come to me and brag about you. Like I didn't know. :)
This made a tear come to my eye. Carry on little Bobette/Bob the builder!
December 13, 2011 at 10:46 AM

Great Aunt Gretchen said…
I was amazed when you told me about the "Shower" and the stroller they gave you. Stroller right or just the toy set?
Very thoughtful!
December 13, 2011 at 7:22 PM

Grandma Seelye said…
I'm sure they will miss your input and hard work on that committee! Such a fun way to honor you! Thanks for sharing what goes on in those meetings;)
December 13, 2011 at 9:35 PM

Abigail Joy Stevens said…
Yes, they gave me a high tech Eddie Bauer Stroller that also doubles as a car seat.
December 14, 2011 at 7:13 AM