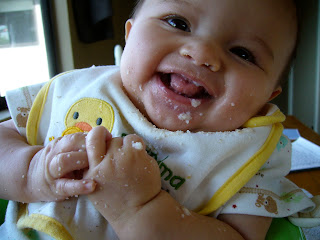 Lee turned 5 months this week. He smells like cheerios and yogurt, and he hovers his chunky bowlegged legs above his diaper as if this were as ordinary as crossing his arms. He focuses on his tiny fingers cupped in front of his face, and then YUM! He gobbles them up. He giggles for no reason at all, for any reason, and his laugh sticks, like syrup, to whoever is nearby. He puts himself to sleep by arching his back and worming his way over to the side of his crib where he shoves his face against the netting and sticks his two middle fingers into his mouth. Sometimes his pointer finger goes up his nose. Sometimes he prefers his thumb. Sometimes a toe. Sometimes no fingers at all. He tells us that he’s ready for bed by scratching his head with one hand and rubbing one eye with the other. And he tells us when he’s ready to get up by talking softly to himself and kicking the rattle toy that hangs on his crib. He enjoys just sitting and shaking his burp cloth up and down. Sometimes he'll tilt over onto his face without being able to pull his arms in front of him, and because he won't make a fuss other than a few grunts, I'll find him face smashed into the couch cushion. He smiles often, cries rarely, naps inconsistently, sleeps 11 hours at night, and poops almost daily.

His parents find themselves calling other children sweetie pie. We tell each other news that would’ve made my eyes roll a year ago hearing it from a mother in our fellowship group: Lee’s graduated to a size 2 in diapers; he drank about 5 ounces in one sitting; I fit him into a 6-9 month carter onsie; today he snatched the napkins and scattered them all over the table; today I tried to give him tuna baby food. What strange little news we have to tell one another now. Before Lee, our news was: the echiveria by the front door is blooming; I accidentally nudged the side of the house with my car; the mailman can’t decide which mailbox to put our mail in; little Maddie our neighbor was walking around outside in her diaper this afternoon. How strange how the topics of our daily phone call to each other have changed. I suppose lawyer and doctor spouses might talk about Obama care or digging for oil in the Whittier hills, but maybe they just talk about missing socks and water spots on their wine glasses. 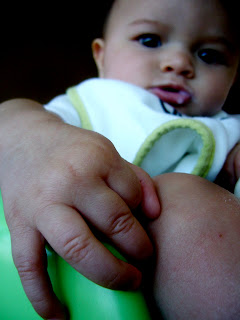 I have finally come to see that I have something special here. It’s like I’ve been sitting at the bus stop with someone famous and after several hours, I’ve finally noticed who's sitting on the same bench as me. Everywhere I go, the old ladies smile, the sight of Lee brightens their faces. My coworkers hold out their hands and say, “It’s my turn to hold him.” They always comment on his hair. My, how much of it he has. My coworkers tap the bottom of his feet to see his toes curl and gently pinch his hands between their thumb and forefinger. I don’t mind if they don’t say a word to me. I don’t mind that the lady behind me at Trader Joe’s is talking to Lee and not me. I don’t mind that older neighbors peer over the stroller’s edges to get a better look. At the end of the day, he’s mine. I take him home and struggle to put his flailing limbs into a sleep sack and kiss his nose and lay him down to sleep. He smiles at me in the mornings and calls for me when I’ve left him alone too long.

He is the instant ice breaker, the heart-melter, and he makes my relatives act like clowns. They each have their unique way of addressing Lee. They speak or ask rhetorical questions several times in a row. They feel his grip and say, “Oh, he’s going to be a good rock climber.” They babble nonsense or tell Lee all the things they’re going to do with him without his mama knowing. They turn into gibberish talking machines of googoo’s and oodoo’s and laalaa’s, while pumping his arms and legs rapidly. He has brought life and energy and high-pitched voices. 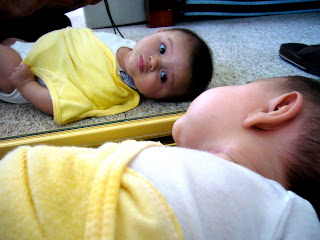 Yes, the entire experience has been like hell week of La Serna High School’s soccer season, like living those newly wed months again, like moving into a new home, like traveling to a new country, like discovering that there are 7 billion people in the world instead of 3 million, like falling in love, and like walking around church with a giant sign that says, “Coming soon: new mom, give her all the advice and warnings you’ve got." When I’m away from him, I wonder, What can he be doing? Has be started on his second bottle yet? Will he take a nap? Will my mom remember to shake up the formula through and through? Will she find the pacifier that I stored in the front pocket? Will he do anything that I’ll regret missing?

I see people walking in uptown, people at Trader Joe’s, Target, Granada Heights Friends’ Church, and in parking lots—people that I didn’t know existed, but now suddenly here they are pushing their strollers, corralling their kids, loading up the van, toting around car seats, and shushing their babies. I swear these people didn’t exist 5 months ago; they were invisible, unintentionally ignored. I only noticed people that were my age or younger. But now the world’s population has grown. Is this how it will be as I transition into each new stage of life? Will my world grow bigger when I have to take my kids to sports’ practices? Will it grow again when they go off to college, when they marry, when I become a grandmother, a senior citizen? How large the world must seem then to people over 70! How invisible they must feel to the rest of the world!

ShackelMom said…
Your posts almost always bring tears to my eyes... I love the way you see, and write. I love the picture of an ever expanding world, and I am sure for many, each new experience of life does that, but not for everyone, and that's okay! :-) We each have our own metaphors. I think each of my children has caused me to see, appreciate and understand, a little better, the family they are connected to, the people they mirror, in so many small ways. It is an amazing kaleidoscope of random traits, movements, expressions, quirks...
August 29, 2012 at 7:03 PM

Abigail Joy Stevens said…
Thanks Luanne, it's wonderful to hear encouragement from other moms.
August 29, 2012 at 7:55 PM

Wilson Family said…
Abby, I so enjoyed reading your post. Hope I get to meet your little guy before he's all grown up. He's just adorable! Sounds like you are doing a great job as a new mom!
August 30, 2012 at 7:07 PM

Great Aunt Gretchen said…
Love, love, love your post! I love how Lee has changed your world for the better. Thanks for sharing! This is a lot like how we felt when Philip joined our world 29 years ago today. :)
August 30, 2012 at 9:46 PM

Grandma Seelye said…
Thank you for sharing your heart!! I love these new insights God is giving you! Yes you have a little treasure for sure!!!
August 31, 2012 at 12:22 PM

Mrs. Coral Kenagy said…
I deeply enjoy your perspective and willingness to verbalize that which you have realized. Children do make the facets of your world grow, shift, evolve...
I had to learn to love Sawyer at first. That was simply my reality. But now, I swear, I love him more and more with each new dawn. It's insane!
Add to that a second kiddo and I'm undone with love and appreciation of God's blessings.
You have such a gift in this blog. I can't wait till Lee starts sharing his own wisdom with you and I hope you share it with us.
September 6, 2012 at 11:58 AM