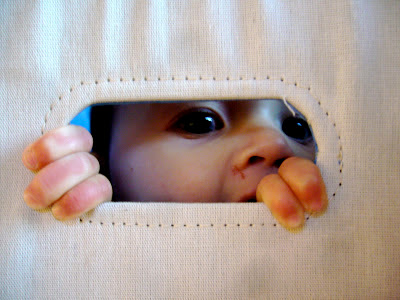 Sometimes I wonder: if I don't share my experiences with anyone, if I don't journal about them or write them down, are they still valuable? So many moments don't make it to facebook. No one will ever know about them, and tomorrow I myself will forget the whirr of the hummingbirds coming to the feeder, the spiral of seagulls flying overhead that marks the winter months, the quiet moments between Phil and me, Lee cooing and whooping and nananaing.

My mom has a picture of me when I was little hammering open walnuts on the back porch. I used to think nostalgically about that picture. Now I think about who swept up the walnut shells and how long walnuts really kept me occupied. Did my mom have to check on me every five minutes? Did I ever hit my fingers with the hammer? What the picture shows is beautiful, but would it have been beautiful without the picture? Would anyone have noticed? And how much of my life do I not see because I don't take a picture or rather because I'm thinking about who's going to sweep up all the walnut shells?

So here's a post about the things that are so much more complicated and messy than the pictures show. 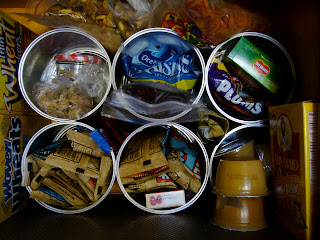 Lee has been entirely on formula since July. We go through about one tin of 23.4oz Tugaboos formula a week, and after several months of throwing away the tins and thinking that someone somewhere could do something cool with all these, I did. Here's the new organizational system for our snack cabinet. I hot glued the formula tins together. Even the negative space between the tins is a cubby for small snacks.

Phil and I have taken up rock climbing again at Anaheim Hill's Rock City. These movies were taken in the gym's bouldering room. The walls curve upwards so that at the top of your climb, you crawl onto a balcony. Phil and I are climbing at level V2 and V3. The scale goes like this: VB, V0, V1, V2, V3, V4, V5, V6...) I'm not sure how high the numbers go.

These two routes are ones that we are particularly proud of, and even though the movie doesn't show me completing my route, I've done it in real life. The camera just made me shy.
Kristy Cowell and I visited the Huntington Library this past week. Lee crawled around the children's library, soaking his overalls and then dragging them across the sand. He enjoyed sitting in the stream and batting at the fountains. He also liked eating the plant life. 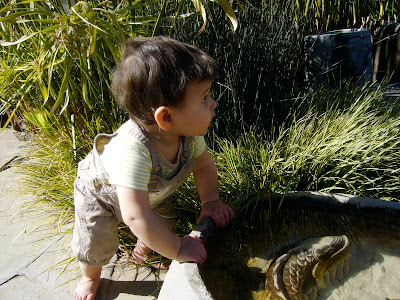 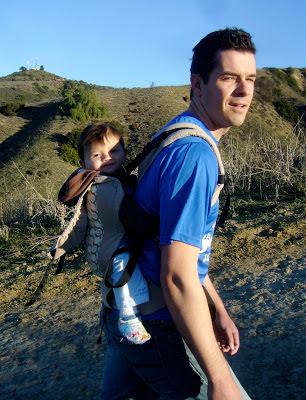 This morning Phil and I took advantage of the sunshine and the Whittier Hills. With Lee in our Beco Baby carrier we hiked the fire road into Hellman's Wilderness Park. The LA basin was clear, the ocean was a pearly blue, the wind was gusty, and the hikers were out. It was all too thrilling for Lee so he fell asleep. The sun shield limited his head bobbing (you can see it flapping behind him in this picture).


Lee's recent discoveries include how to splash in the tub. He looks rather surprised whenever it happens—as if someone else were subjecting him to this, and how dare they!


Lee has also learned to peel my mandarine oranges. He starts the peel for me and sometimes finishes it for me. Here Phil is installing our front door organizer shelf. It was made from my parents' old window and has cubbies much like an old fashion post office. Since this picture Phil has attached black hooks to the underside to hang our keys. 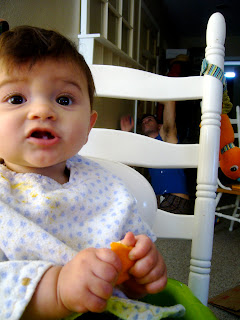 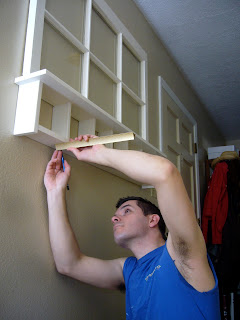 As Lee has become a more consistent napper, I've taken up a more regular writing schedule and that means more exciting research. This time I'm not touring water treatment plants and landfills, but getting knot lessons from Kirk Stevens. After all, every writer needs to know how to make a hangman's noose. Next up on my list of items to research is archery.

NoSpamHam said…
Cool idea for using old canisters for snack holders. Wow, Lee has changed since I saw him just two months ago...time flies and the kid grows fast!
January 20, 2013 at 1:36 AM

MommaMina said…
Walnut shells are a small price to pay for some fresh air and fun. I took pictures because without them I would've forgotten, but you take pictures and add the insights to boot. You win.
Lovely to see and read it Abs. Thanks
January 20, 2013 at 8:51 PM

Erin said…
Fun updates! I was talking to a friend today as we were walking to the park, and something she mentioned made me think of you and a possible writing topic. She and her son look for all of the water mains, sprinklers, sewer covers, etc. on their walks. Her son is kind of obsessed with it and knows where every one is. She said she has been looking everywhere for a kids book on the underground systems like these, and can't find anything. I thought that is something that Abby might be interested in researching and writing about!
January 24, 2013 at 8:25 PM

Great Aunt Gretchen said…
Love your post! It really is fun to see what the climbing walls look like & you 2 conquering them. :) I can hardly wait to have Lee come splash at our house! :)
I think a great thing about pictures, is that they jog our memories. I bet most of our memories of vacations, celebrations, etc. are remembered because of the photos.
We used to crack open walnuts too. Kept us busy all afternoon!
January 24, 2013 at 9:28 PM