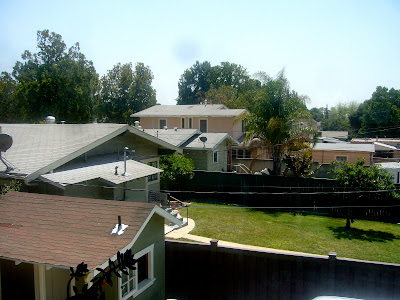 The view makes me want to leap from rooftop to rooftop singing “Chim-chimney, chim-chimney, chim chim cheree . . .” twirling a broom over my head and using the bathroom vents as launching points. That’s probably not good for the shingles, and I probably couldn’t make it from one house to the next unless I had a pole vault or grappling hook.

I’ve found myself thinking like this on many occasions. If I tie this sheet to the top of this chair and then secured it to the ground at an angle, I could have myself a little ramp. Wow, there’s a lot of room under this bed; I wonder if I fit. Hmmm . . . this packaging has such interesting dips and rises; it could be a city; I can fit all Lee’s blocks into it—and I entertained myself for a good five minutes doing it. How many cherry tomatoes can I eat before I have diarrhea? If I fill this cookie sheet with water, will Lee splash in it or sit in it. Sit in it; I should’ve known. 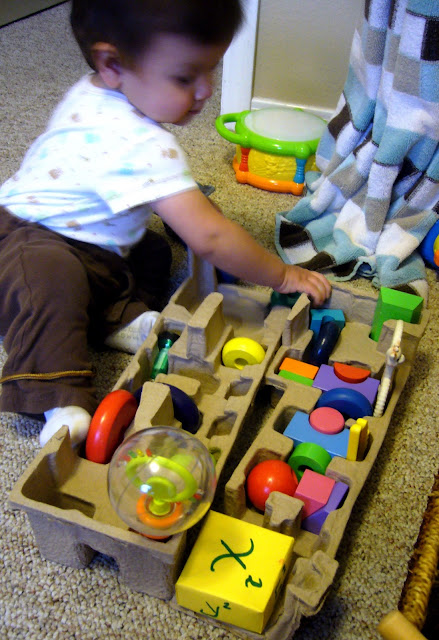 I must work twice as hard now because I must keep Lee distracted long enough for me to spray paint the bathroom towel rods or change the smoke alarm or scrub his table mats or knead bread. I attempted to make fresh bread from scratch yesterday using one of Aunt Luanne’s recipes in Aunt Robin’s cookbook. And I’ve learned many things from this first bread baking experience.

1)    Be sure you add all the wet ingredients before kneading.
2)    Placing the dough in a warm place doesn’t mean to keep the oven on
3)    Be prepared to sweep and mop and wipe down all the counters when done
4)    Flour and water make glue
5)    One-year-olds cannot help
6)    Baking bread takes all day
7)    Homemade bread is far more satisfying than store-bought bread 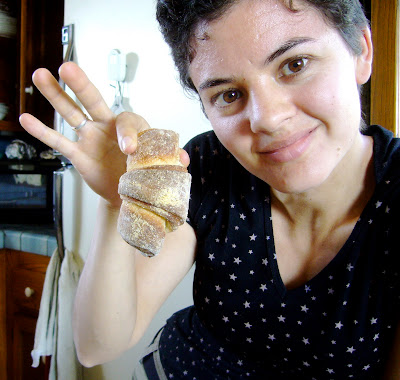 I produced about two-dozen cornmeal crescents. They looked similar to Pillsbury’s crescent rolls that you peel out of a package, roll, and bake. But mine were large and smelled better and had the denseness of a pound cake. Maybe they weren’t supposed to be like that, but they were delicious. I spread one with jam and butter for brunch. Lee wanted one too, along with watermelon and cherry tomatoes.

Yesterday I sat him in the freshly churned dirt beside the tomato bushes, and he found and ate the red ones unassisted. He popped them in his mouth and let the seeds run down his bare chest—I’d taken off all his clothes knowing this was coming. Then he ran his fingers through the soil, crumbling dirt clods and pointing at ants.

On Wednesdays we watch the trash trucks lift our cans. They grind and roar and pop so that Lee often jumps in my arms as he watches. Yesterday morning when I went in to get him up, he was standing in his crib, peaking through his window curtains at the trash truck in the alley. He pointed and said, “Truck,” very clearly. I called Phil to tell him this exciting news. He wants to know it all.

Phil’s homecomings are so rich. He often joins Lee and I next to our Ikea bookshelves reading bedtime books. I pull out “100 First Words” and Lee sits on it and points at the pictures: a chick, a ball, a car, a motorcycle. Phil makes the right sound affects to all the noise-makers in that book. He can make different sounds for the dump truck and the tractor, the motorcycle and the sports car. But he has a pathetic little scream/yelp that he makes whenever Lee points to the goat. Phil said he’s doing a screaming goat. I personally think I can do better animal sound affects than him. I grew up with chickens and know both what a chick sounds like and a chicken that just laid an egg. Fish, penguin, and camel sounds, though, are not my specialty.

ShackelMom said…
Nice job on the bread! We love those! The next time it will be a lot easier! I like them because they are easy compared to croissants, and good with ham and cheese in them. Fun post!
May 2, 2013 at 8:04 PM