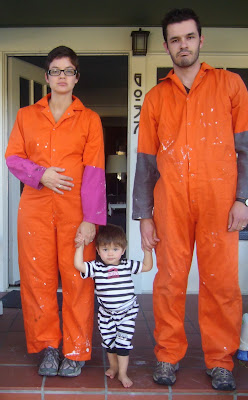 We ran out of candy Halloween night. I should've anticipated larger crowds. Two years ago when Philip and I strolled around Uptown Whittier on Halloween, we were flabbergasted at the quantity of people. The sidewalks were reminiscent of Disneyland's Main Street at Christmas time.

I thought three bags of candy would be enough, but those were gone before 8 o-clock and the Batmans, Wolverines, walking dead, and princesses kept coming. So Phil started to tell kids that we had no treats left, only tricks. For one non-suspecting boy dressed up as a Minecraft character and unable to see out of his box-head costume, this meant a spoonful of pumpkin guts in his goodie bag. Phil had a tupperware full of the orange slime that he'd carved out earlier that evening.

I think dressing up as a convict was getting to Phil, that and his scruffy beard. We were wearing our orange coveralls gifted to us by my mom to help in household projects. Lee too had a black and white striped costume: "Alcatraz Swim Team," it read.

We'd put on our getups, rolled the fire pit into the front, had dinner, made smores, and drank hot apple cider in the comfort of our own yard to participate in the festivities without wearing ourselves out with needless candy acquiring for a child who doesn't eat candy. 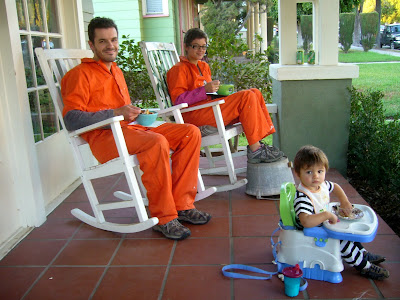 When the last candy was gone, Phil got creative. He began passing out sticks for kids to toss into the fire.

"I made it! I made it!" one little superhero exclaimed.

"This has been the best house the entire night," a parent wearing Incredible Hulk boxing gloves said.

The cool, the weary, and the intimidated stepped up to our fire ring to toss the chards into the flames. I was impressed with how the little children thanked us after they were done. Even the pathetically dressed skateboarders wished us a good night after throwing in their sticks.

I thought I'd encounter Satan and witches and demons. Sure there were a few bloody clergymen, but the night was primarily tame and polite and good fun. You wouldn't think so given the decorations around Uptown, most of which would frighten anyone under five and even some six-year-olds. 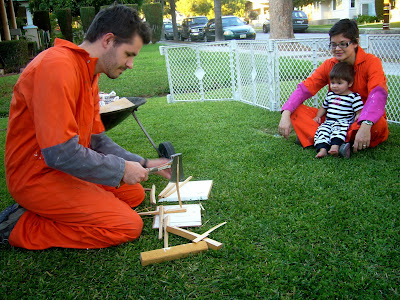 In the morning Lee and I took a stroll up and down our block collecting candy wrappers. No smashed pumpkins. No egged cars. No blood or glass on the street. I suppose elsewhere criminals were at work using this questionable holiday to their advantage, but on Comstock the criminals were safely tucked into their beds by ten.

Grandma Seelye said…
Oh what fun!! I love this great report! Your blogs are a wonderful on-going pictorial journal.
November 2, 2013 at 6:27 AM

Great Aunt Gretchen said…
Love your convict costumes! the the "trick-&-stick" idea was a great one!