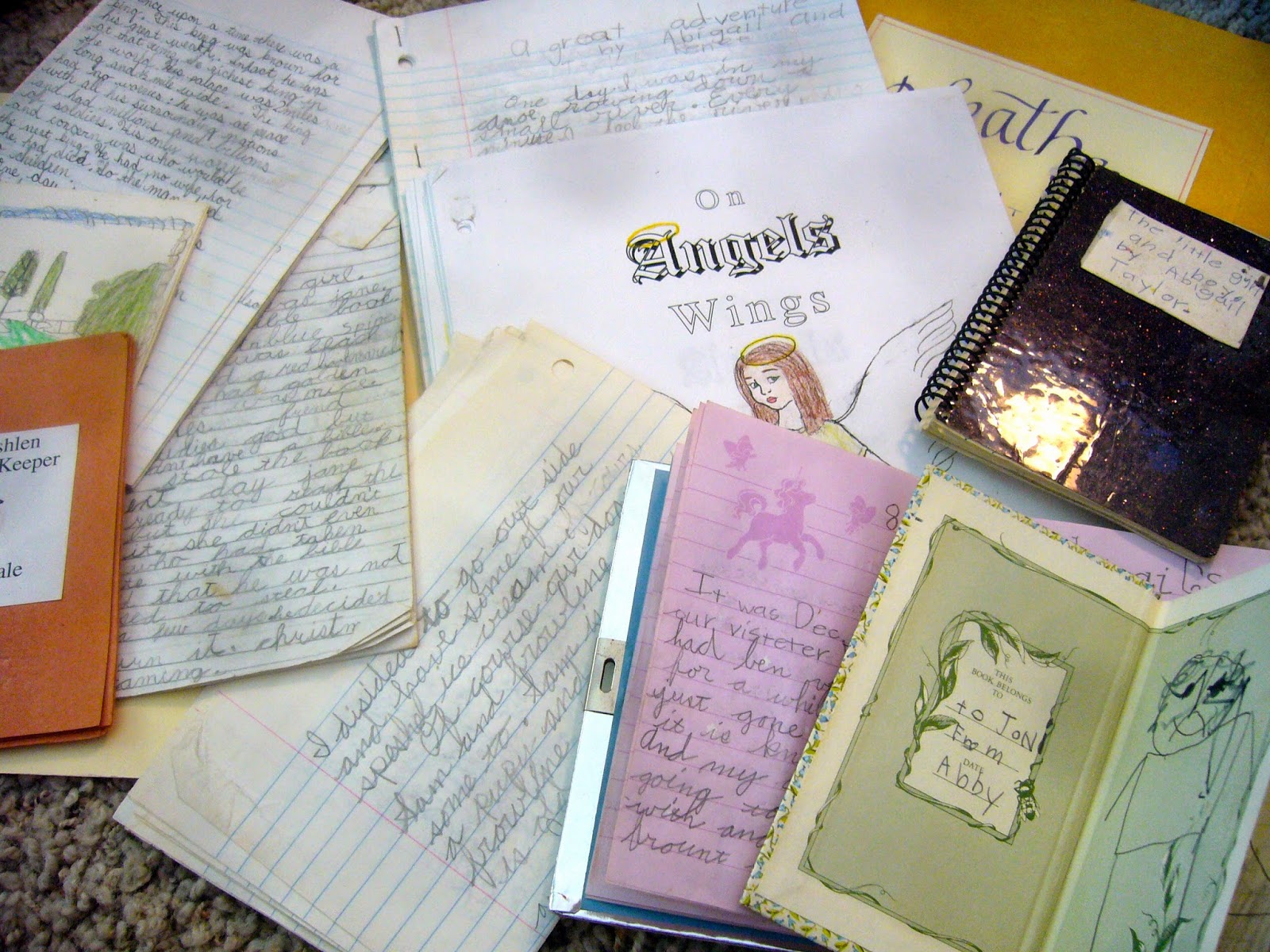 I pulled a box out of our garage today and found a folder with many of my first stories, classic works of literature like The Little Girl, and its sequel The Little Girl and Boy. I also found this title-less short story. The characters therein are purely fictitious.

"Was upon a time there was a haqqy girl. the haqqy girl had a mean mom. the end." 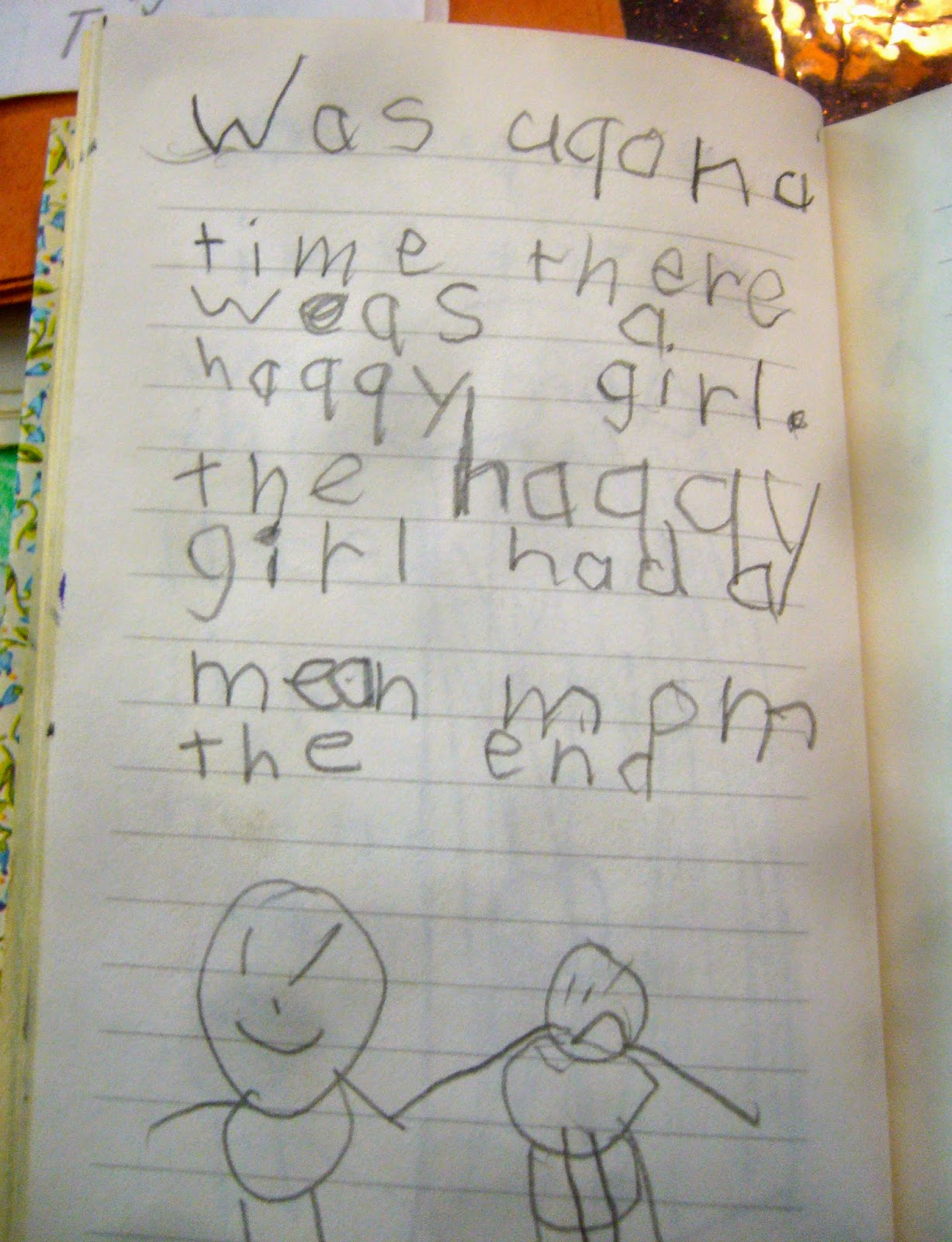 February 25, 1994
I had no idea what was going to happen and this turn of events was going to change my life. After school I was playing hide and go seek with my dogs and brother. Then my mom called us in to eat.
After we ate, it was almost black outside. Jacob and me decided to roll in the ivy. We pretended that the cars had bad guys in them and the bad guys shot us and then we rolled down the hill. Jacob said to crawl up the hill. One time as I crawled up, a car passed and I pretended to die. I tumbled back and I hit my knee on glass or something very sharp. And anyway it was a very clean cut.
It felt like a sword going through my leg. I lay there for a couple seconds as my brother stared at me. I held my knee and said to Jacob, "Ouch, ouch, ouch, I broke my knee!" And as I said this, I looked at my knee and there was a big red spot on it.
My brother asked if I wanted to get Mommy and Dad, I said no. I quickly went inside and said, "Don't let me look at my knee."
I ended up having 3 stitches. I really didn't hurt, and I had to miss a lot of PE days.

December 26, 1994
I got tons of neat stuff for Christmas. Jessica is still being a brat. Tomorrow I am going to Knott's Berry Farm without Jessica. I got tons of candy too. Jacob got lots of computer games which he is playing right now. Awhile after that I was sent to my room because I was trying to be mean to Jessica by taking her chair and her jumprope and using it as a microphone to interview a grumpy person, which was Jessica.

March 12, 1995
I am in the car on the road to Mammoth. We have already passed the park and are almost to where the beef jerky place is. I see lots of snow on the mountains. Brent came with us up to Mammoth. Jacob thinks I like him. I like ZOSH E BOSH RASH A NOSH O SOSH E GOSH A TOSH E GOSH A TOSH E ROSH O O DOSH WASH A SOSH HOSH. When we got there the snow was as high as the 2nd story window and fresh. That night we went out to eat and got rentals for our skis. At the park Jacob did a back flip off the swings and got hurt.

July 7, 1995
Last night my hamster kept getting out of its cage. I woke up at 12 and 1:30 listening to my hamster. Finally I just went into Jacob's room to sleep. This morning Mommy sent Jacob, me, and Jess out of the kitchen. She wanted us to stop fighting and be cheerful, but I didn't do anything. When we came back in the kitchen I hugged Jessica and shook her hand very hard and said, "Jessica, how are you today?" Jessica started crying and I got in trouble.

June 17, 1996
I can't let it go. It hurts too much. As I came home from swim team, I saw Mama Grace give away out last 2 kittens. The third kitten was also given away before then. I named them Brandon, L.P., and Jessica. But now they're gone. I wanted so much to keep just one and I thought we were. Now I sit here heart broken. It feels like someone took a piece out of me. I wanted not to eat dinner to show my pain even though I am very hungry. I loved them soooooooo much. I even slept outside with them last night. Now they're lost out in someone's backyard with no mother. They work us very hard on the swim team. I hope to join a sign language class and get a mini pool. 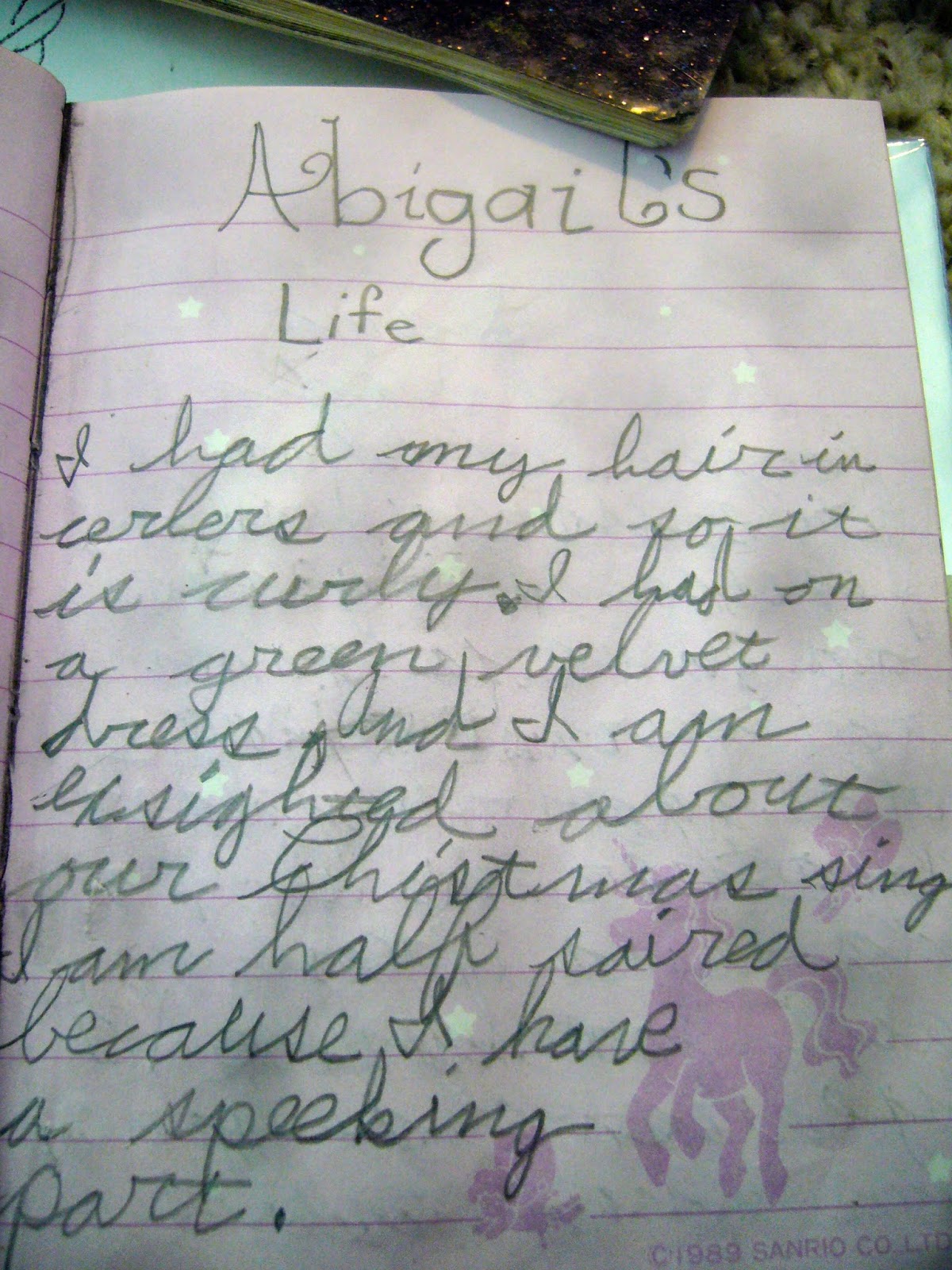 Nathaniel and Charissa said…
I love the bit about interviewing a grumpy person :) so fun to have found those memories! Hope your heart has healed from the kitten incident.
May 1, 2014 at 1:58 AM