All About the Ducklings 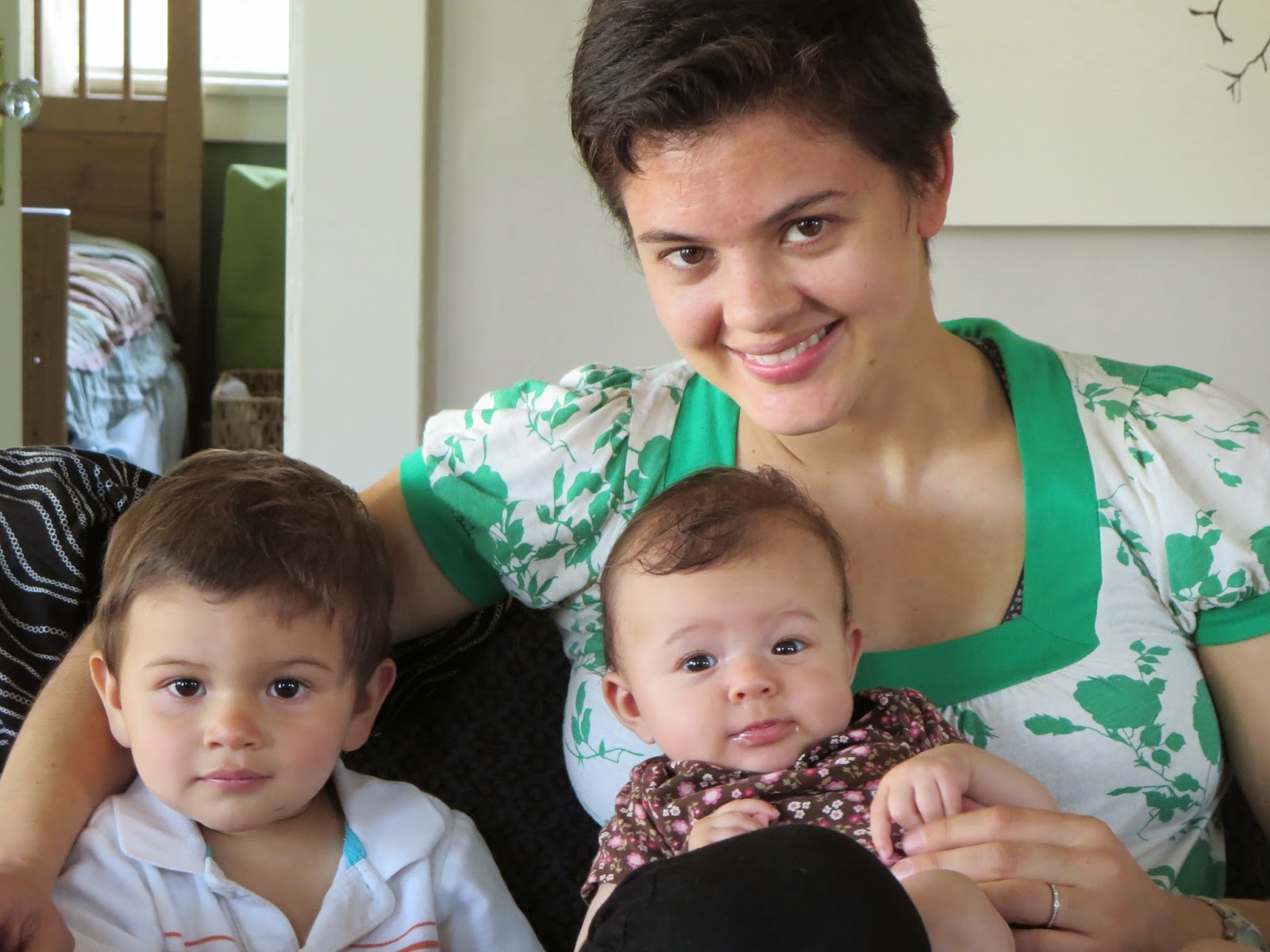 I am getting to know these little people more and more each day, and I marvel at the interactions they have with one another. The first time Phil and I went anywhere with both of them, one of us said, "The kids are in the car. Wow! We can say that now. We've got kids."

We're a little family, a crowd, a bunch, a little gathering of people with customs and routines and traditions that no other family has. How strange!

Since the coming of Rose, Lee has become more cuddly and clingy. He requests to be held and is shy around strangers. We'll be walking down the sidewalk and he'll crawl up into the stroller when he sees someone walking the opposite direction. When away from home for long periods of time, he often looks at me and asks, "Home?"

He doesn't mind being alone and without toys. I often hear him talking to himself in his time-out box or in his crib before he goes to bed. Any sort of physical punishment on the other hand reduces him to tears. He always wants to cuddle after a flick on the hand. It's like he wants to know that we still love him even after he's been naughty.

Being naughty these days looks like scattering his play beans across the kitchen floor, throwing food off his tray, hitting our windows with his toys, going past the line on our front yard sidewalk, or throwing hard objects inside. 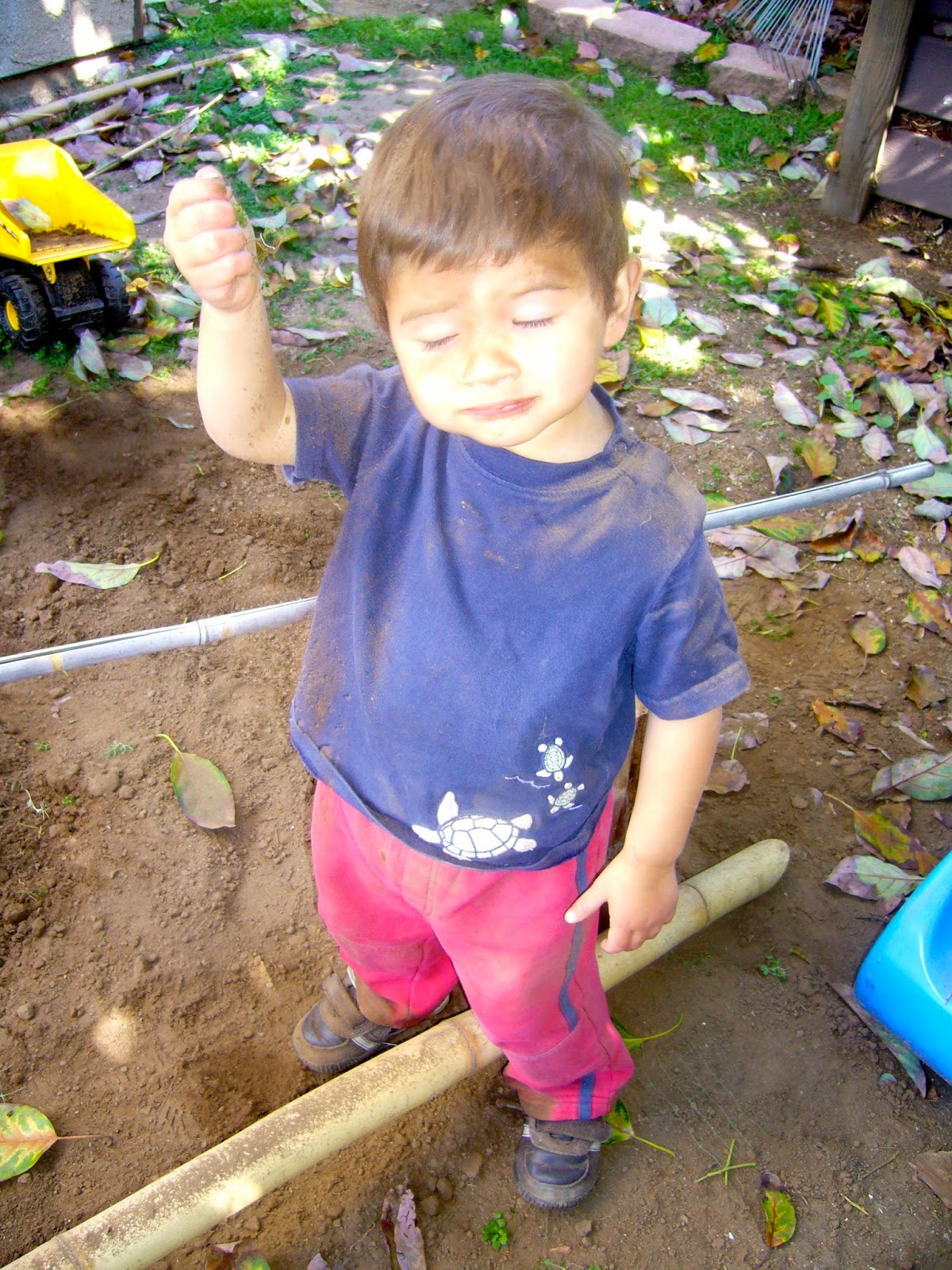 One morning before nine, I left Lee alone in the backyard for awhile, and when I returned, I found he'd thrown dirt in his hair, down his diaper, and into his shirt and shoes. He was actually throwing dirt into his own face when I arrived. Phil calls this the self-flagellation picture. No punishment. Only a photo, bath, and hair cut.


I've had it with cutting his hair with scissors. He gets too much sand and dirt into that scalp. Thus, this had become our new method for cutting his hair. He doesn't seem to mind. 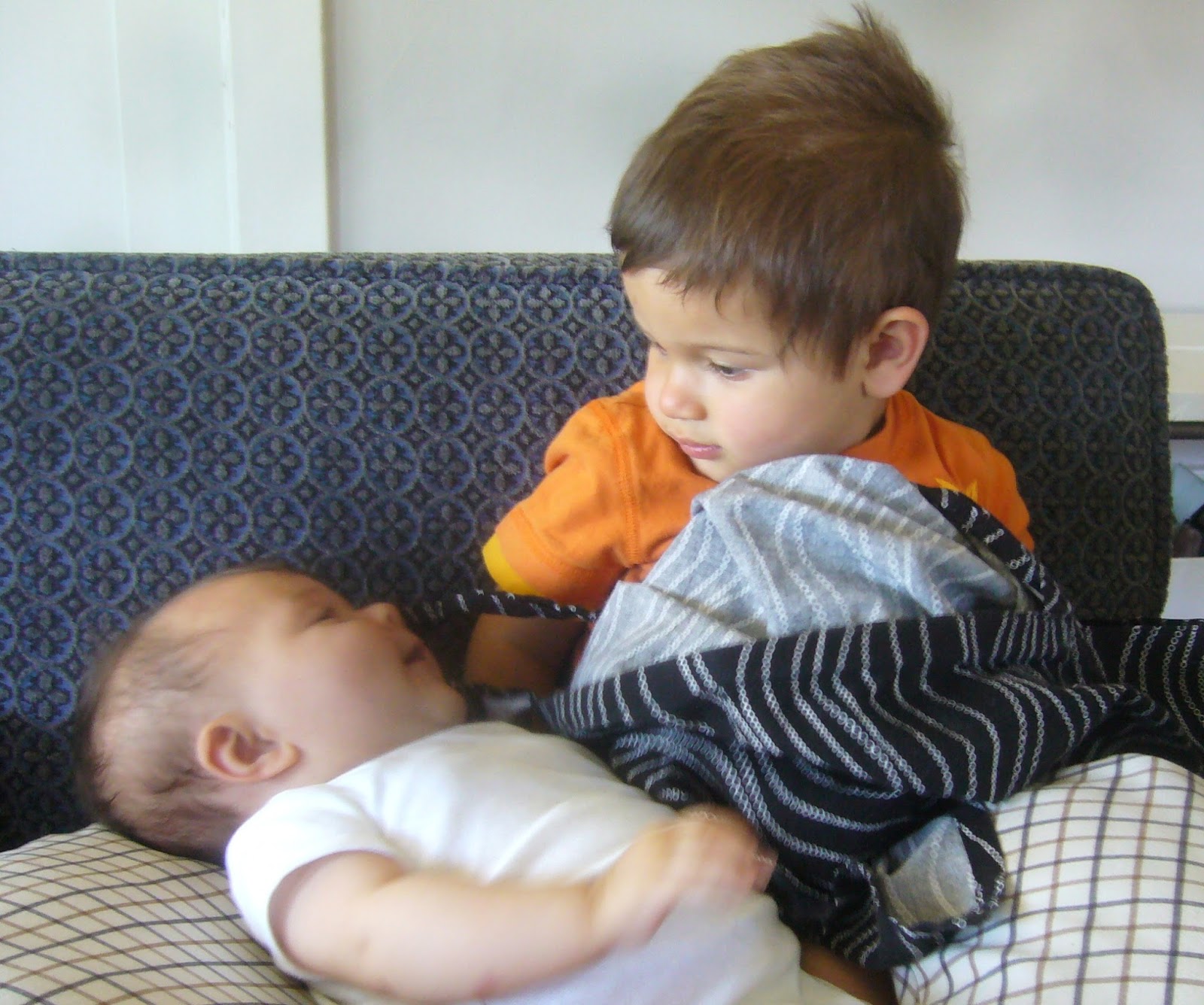 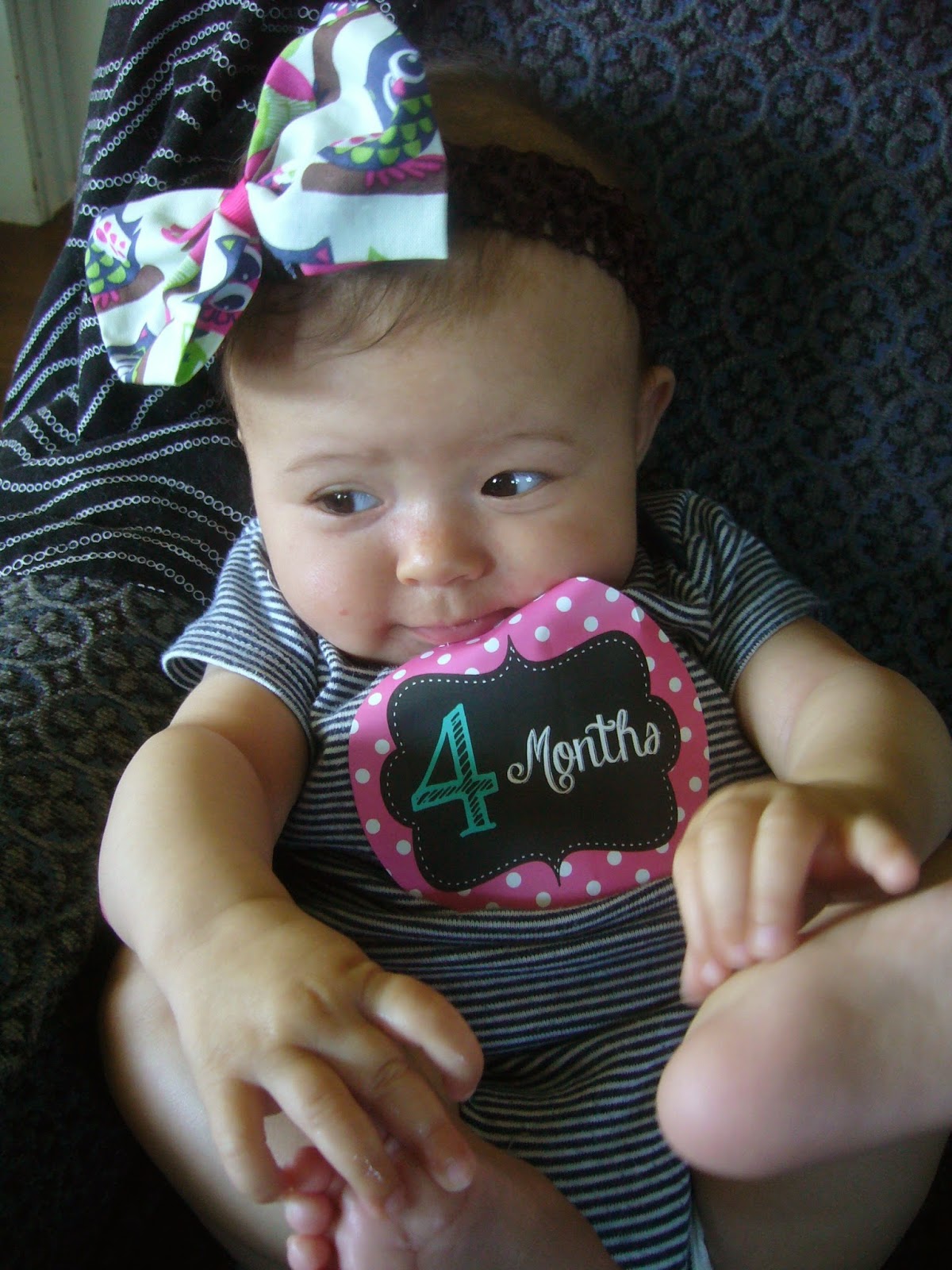 Rose thinks that everything Lee does it great. He's made her giggle twice now. Once when jumping on his crib mattress and once when dragging a bottle brush across the sofa. She watches him incessantly and I'm so thankful for it. Rose is far more attached to me at this age than Lee ever was. Probably because I'm breast feeding Rose and fewer people have watched her for me. So having Lee around as another person to watch is a life saver. I can leave Lee with Rose for short periods of time and Rose won't feel abandoned. 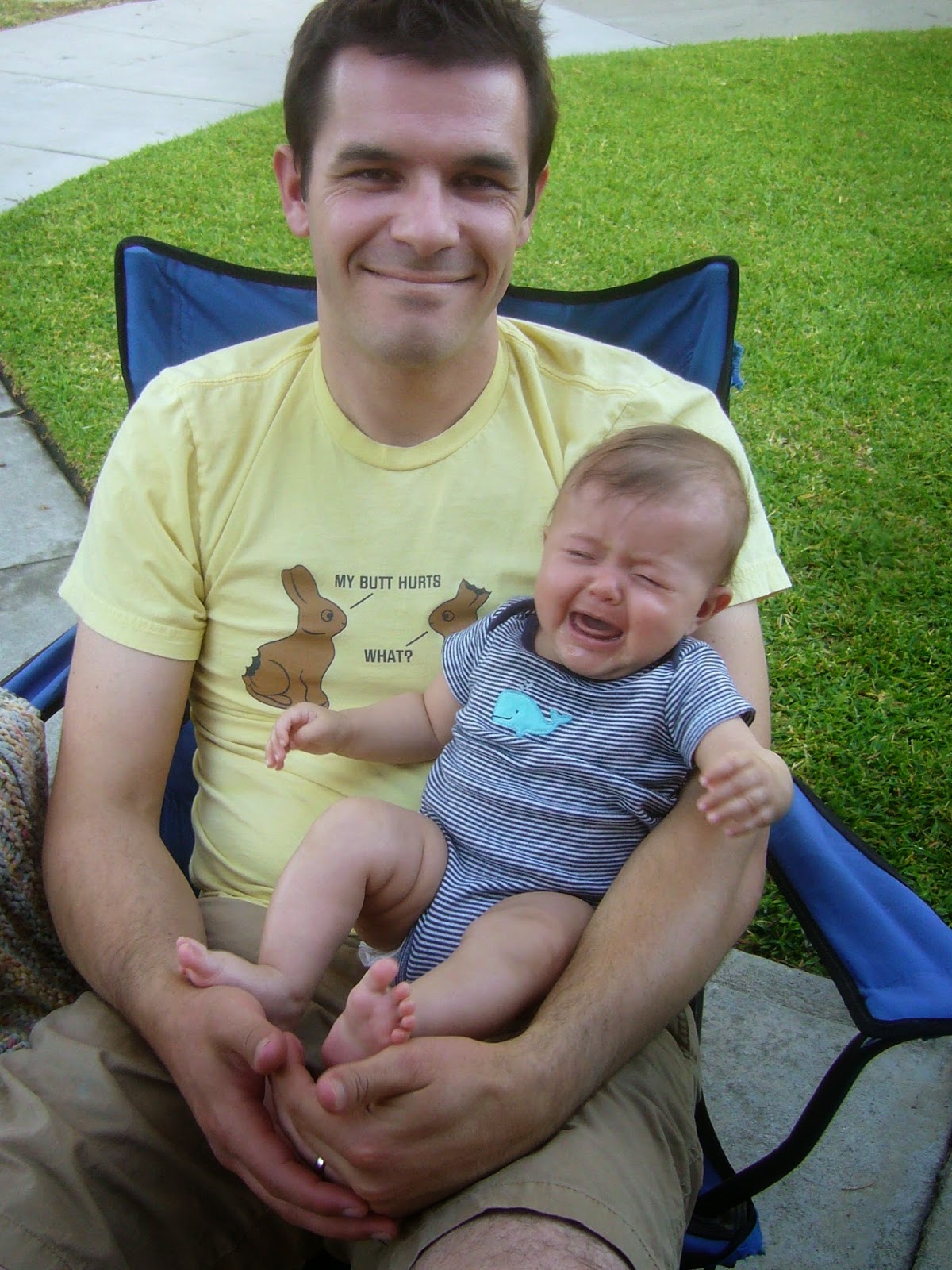 She is like that little girl with a curl right in the middle of her forehead. When she was good she was very very good, but when she was bad, she was horrid.  Horrid usually means she's tired, hungry, or has gas. The gas has been the worst. Her little belly tightens and she gives off the worst screeching cries. It pierces the ears. I can't hear Philip. I can't hear Lee. I can't hear anything but her when she gets going. So far gas relief drops, a change of scenery, or running the vacuum have been the best cures to her screaming. However, when it gets to be too much, I'll just put her in her bed, turn on the fan, and shut the door. Still not sure what's causing the gas. I think it might be dairy products. Boo! I like milk.

That's been a new development with this baby; I've let her cry herself to sleep. It's been liberating. I make sure she's been fed, changed, had her gas medicine, and then I leave her to herself. That's how I've established a nap routine and bedtime routine. She goes down at 8pm and sleeps through until 4am. It took about a week to get her to do this, a week of putting in my ear plugs and dragging her crib into the bathroom and shutting the door. Poor Phil. He doesn't sleep with earplugs, so he had to listen to Rosy cry it out.

Oh yes, that's another act that Lee has learned to mimic: Rose's crying fits. He'll lie on his back, kick his legs, and say, "Waaa waaa!" He'll also sit on the couch and slouch down like Rose does, then hold out his hands for me to lift him back up. He has yet to find her funny or a playmate, but he'll obediently show her things when I prompt him. "Show Rose how you drive your cars along the couch. Show Rose that little grasshopper. Would you like to put one of your necklaces on Rose?" He'll drape his fuzzy blanket on Rose or stroke her chin with a corner of it. Sometimes he'll kiss her. And every morning when I take him out of his crib, he looks to find the "Bebe!" He'll not remember life without her. Come to think of it, neither do I.