By Abigail Joy Stevens September 28, 2014
For Jerry Stevens . . . because I know you can't get enough of these kids. They are, after all, adorable.

Rose often rotates her wrists and kicks her legs at loud repetitive noises like the vacuum cleaner or a ball being rolled around in this big blue bucket. We call this Lee's turtle shell. Grandma Taylor got it for him for Christmas. Lee sits inside the bowl and Phil spins him around in it. It's also used as a mixing bowl to make pretend muffins or cakes or cookies.

When Phil comes home from work, Lee often requests to go out into the front yard and run around or throw up, which means to be thrown up, not to vomit.

Lee is a very deliberative speaker. He often takes a moment to answer a questions. But he also likes to speak gobble-de-gook. In addition to this, he has taught himself how to go cross-eyed. I was eating lunch one day, looked over at him, and he was doing it all on his own. 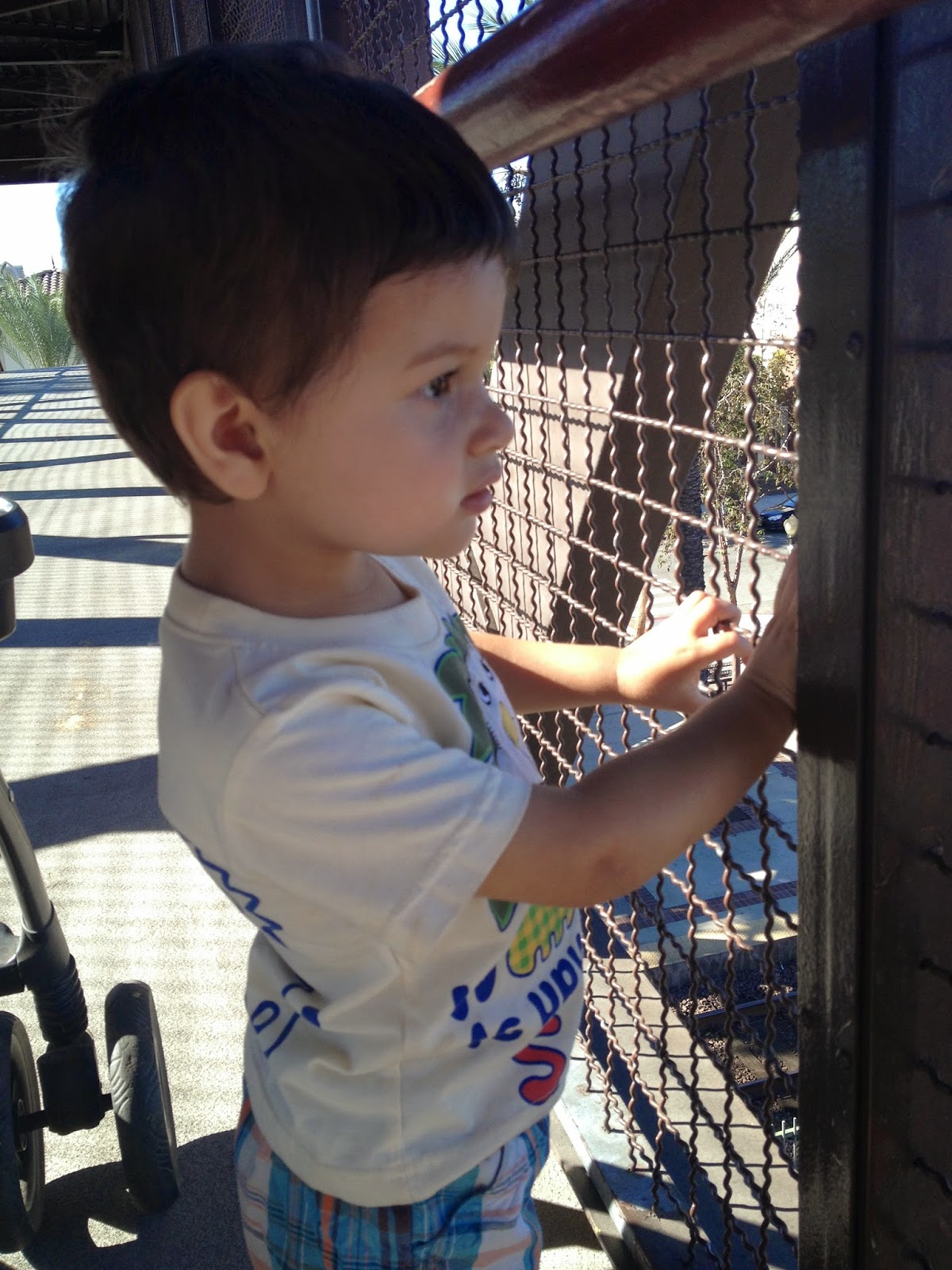 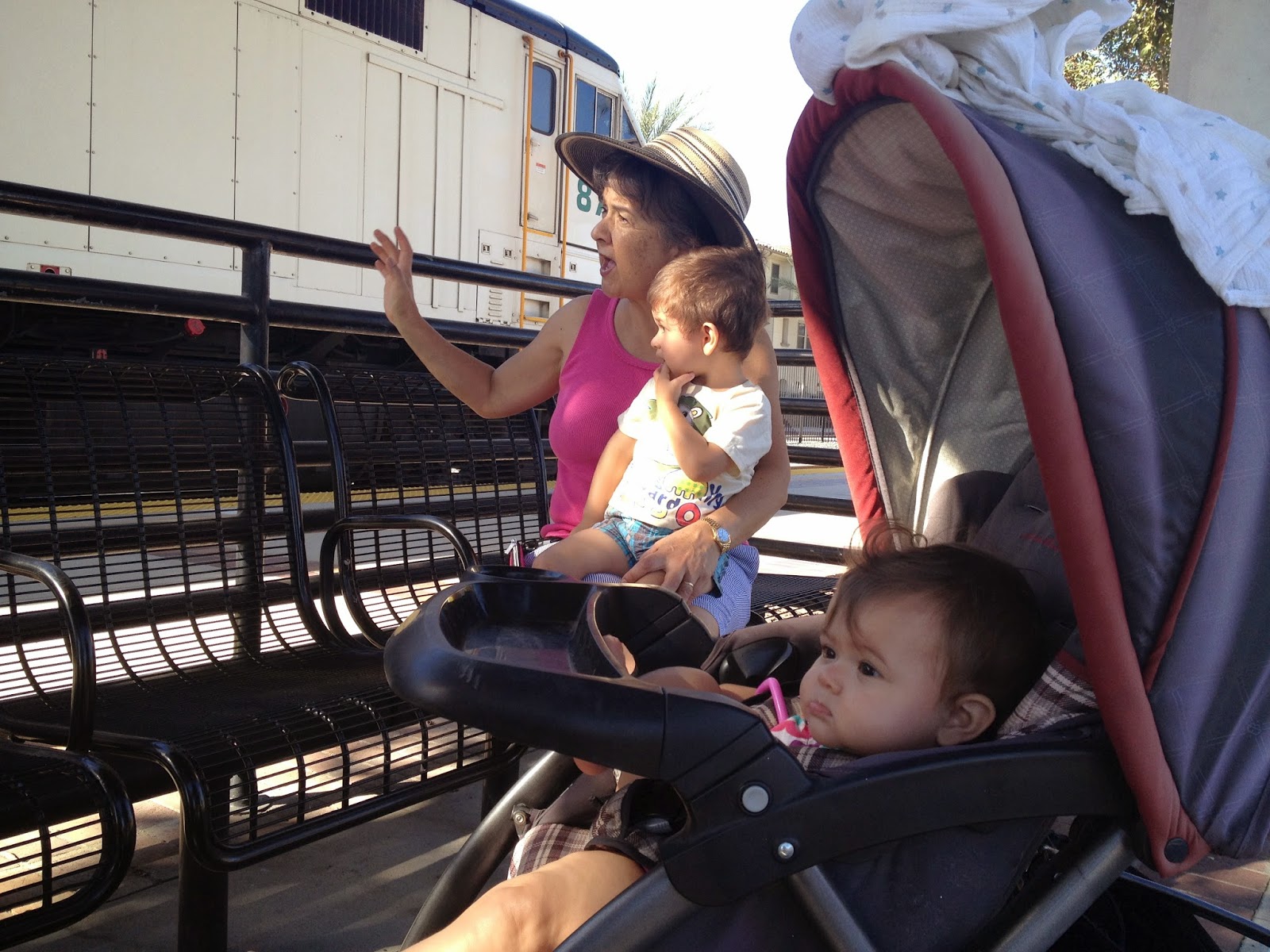 We went to the Fullerton Train Station this last week with Mama Mina. We saw about 6 trains. One was a cargo train, which we are watching here in this video. Lee spotted the UPS and Fedex trucks aboard the railcars and said, "Mail truck." The engines were rather loud and intimidating, so he wanted to be held as he watched them go by. We also road the elevator up the overhead bridge and stood at the enclosing mesh and watched a train or two go by.
I often play with Lee at the park when we go. We climb up the play structures together and slide down the slides. I'm including Rose in this as well. I think she'll enjoy thrill rides one day.

Rose can't crawl yet, but she has stood up twice now. Once, she grabbed the side of her crib and pulled herself up, the other time was on the edge of the bathtub. Unfortunately, she wasn't able to replicate it for me after I grabbed the camera. 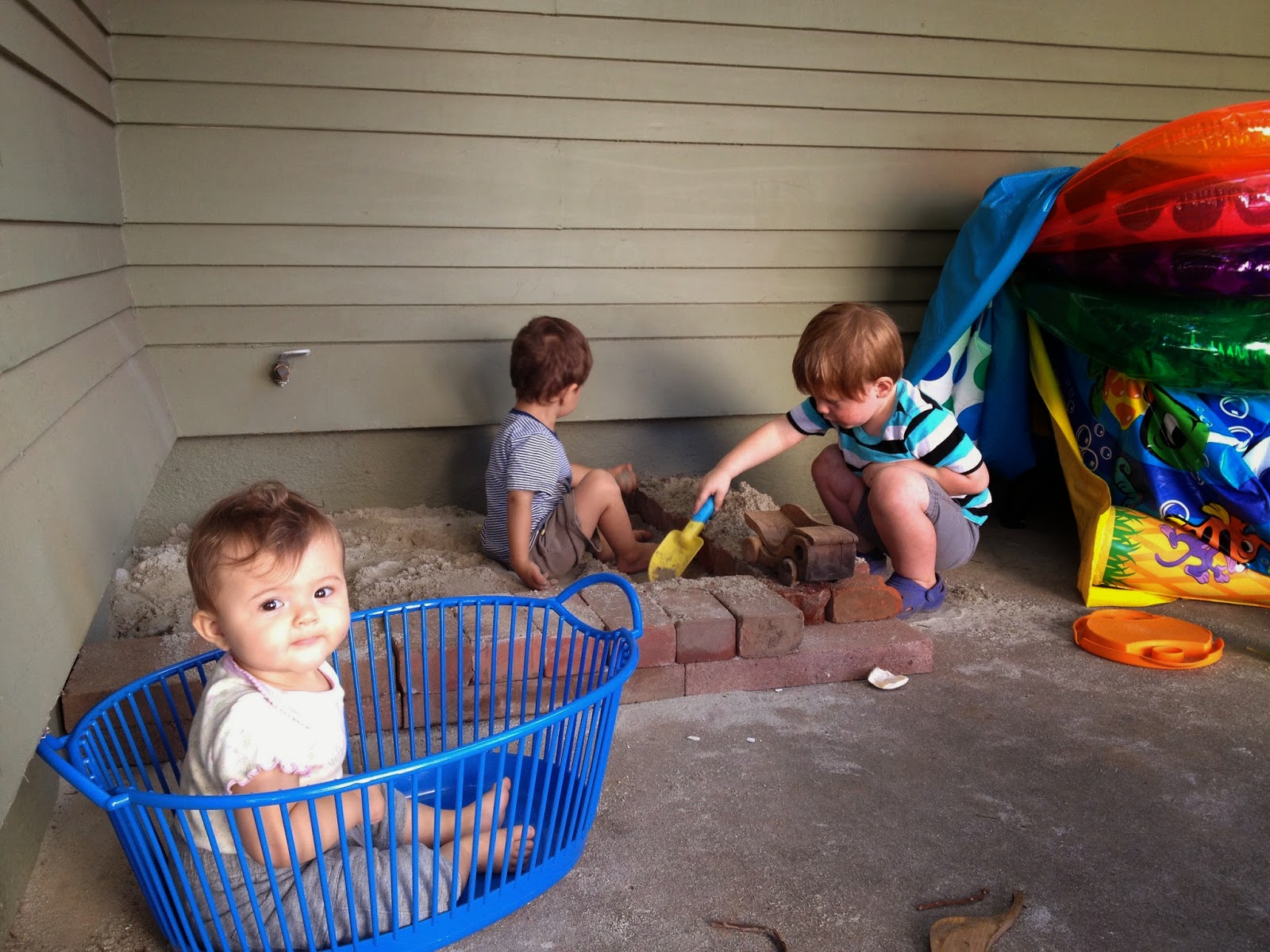 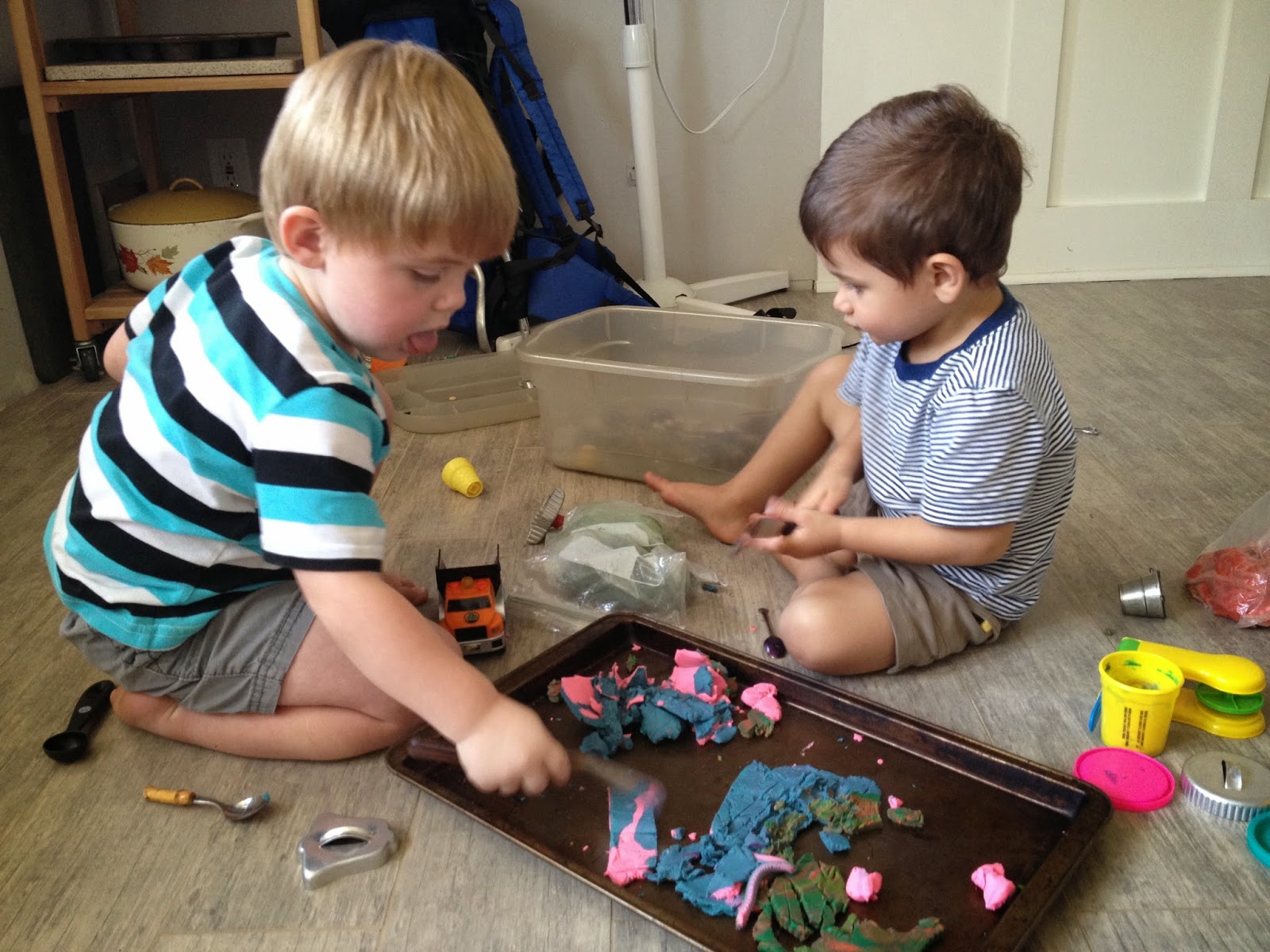 We had Lars over one morning this past week. He and Lee are learning to play alongside each other. Sometimes they play with one another, like when they race our two push toys back and forth on the cement slab. However, most of the time they just do stuff beside one another. That 6 month age difference does influence their interaction. Lars will pick up one of Lee's trash trucks and ask Lee, "Where did this come from? Target? Cosco?" And Lee will stare at Lars for awhile and then say, "Digging truck." At least they're both talking about the same things. In the picture above, Lee and Lars are using some of the gadgets I got from your kitchen, Grandpa. 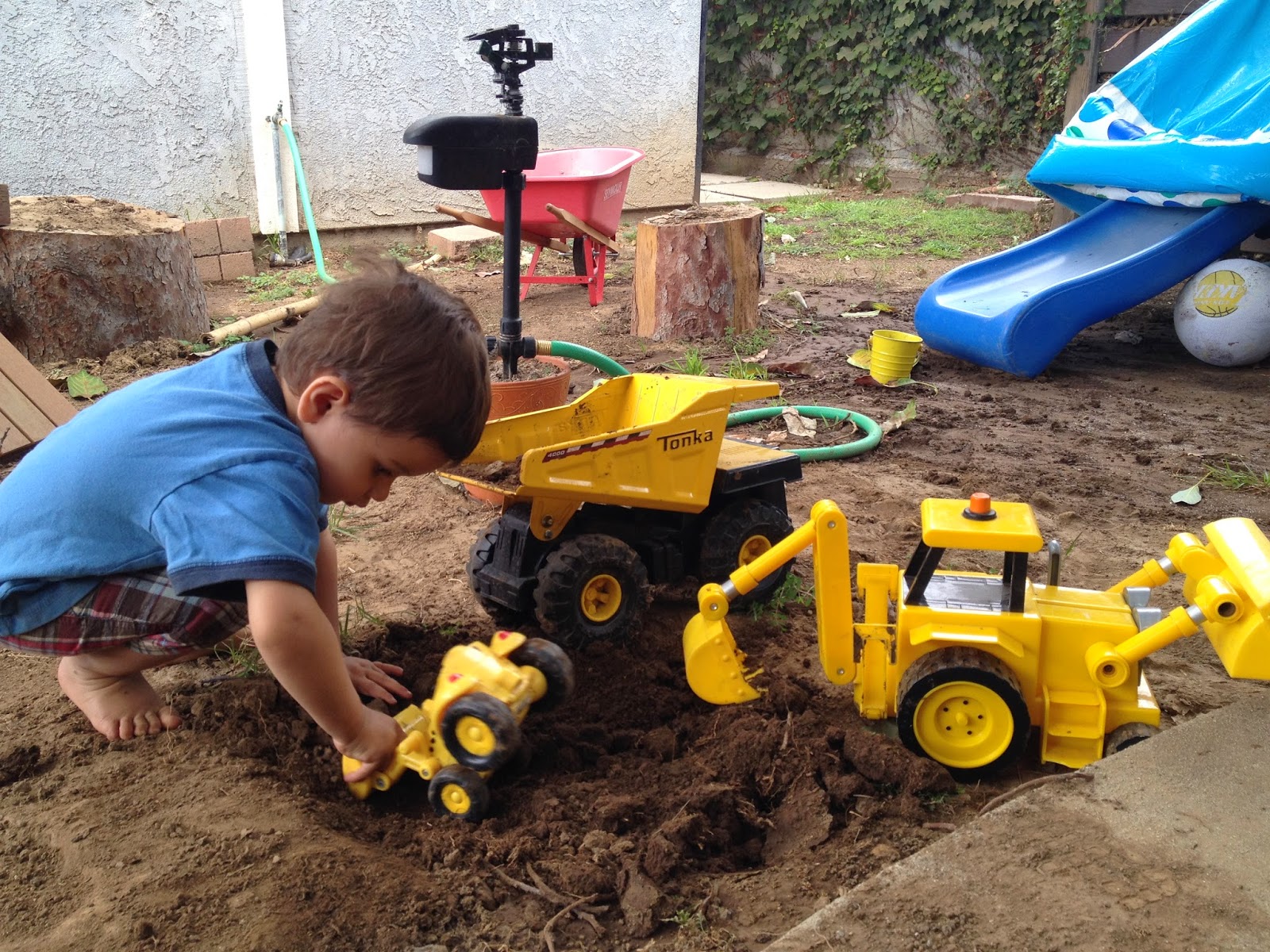 This has been the week of new toys. In addition to the kitchen gadgets, we were given four new trucks from our neighbors, a box of wooden trains from my mom, access to the gadget boards we're making for the GHFC boutique, a model airplane from Auntie Terri, new library books, and I set up an obstacle course in the backyard for Lee. 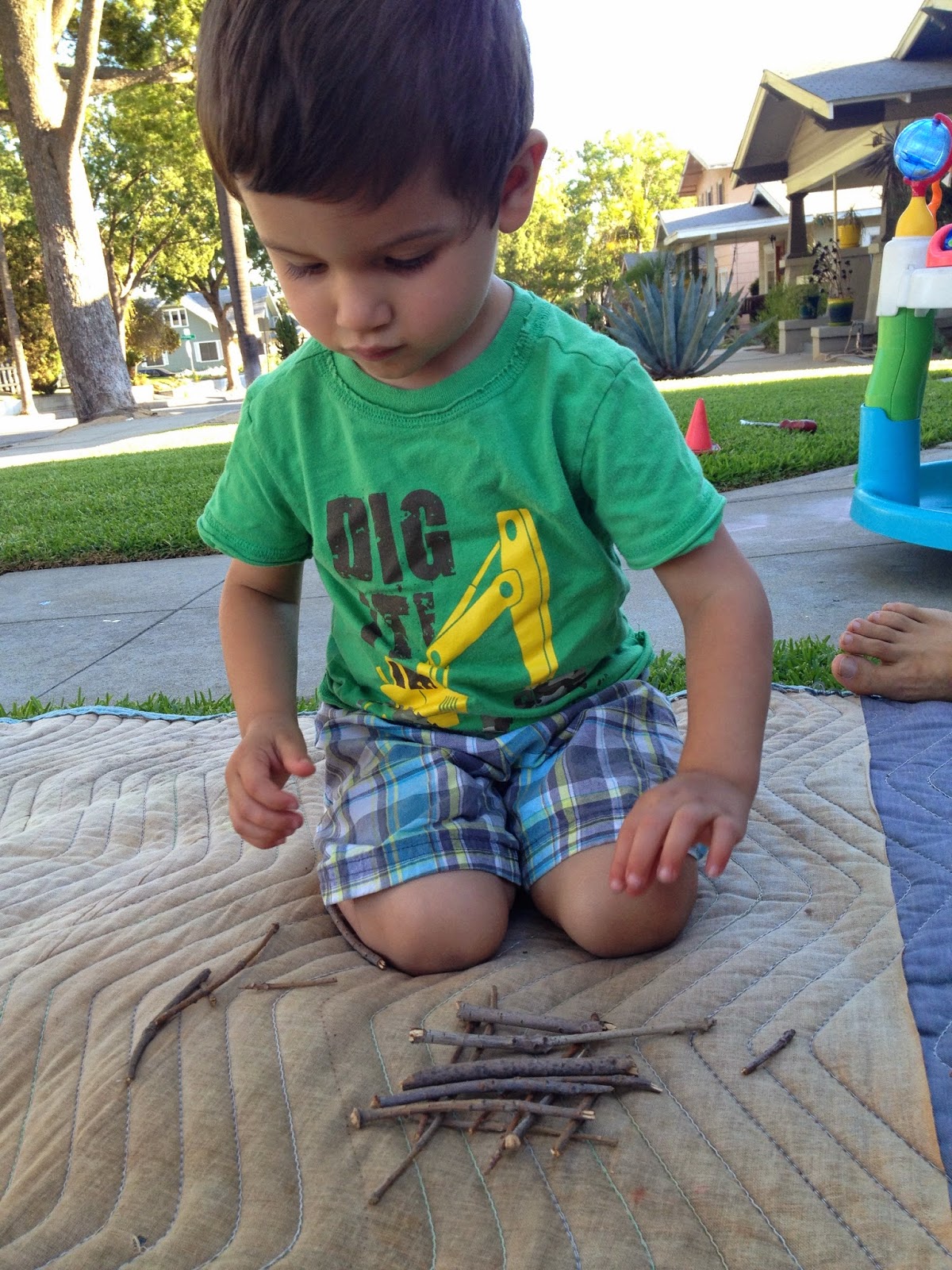 One afternoon I was in the front taking advantage of the cooler weather. Lee and I collected twigs and pretended to make camp fires. Here he is lining his twigs up. My twigs were teepee style, so I'm not sure who taught him how to make a fire using the log cabin method. 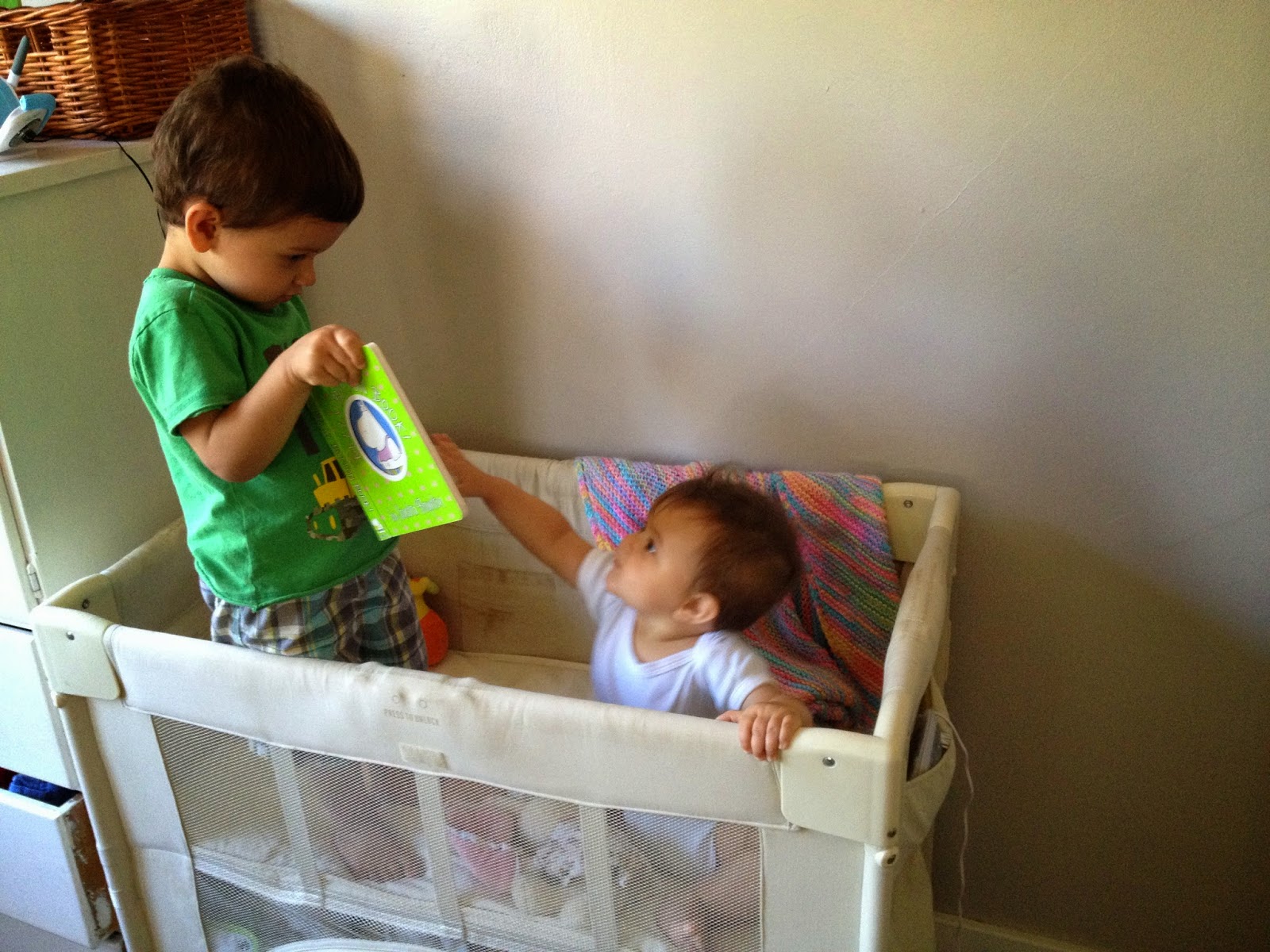 Lee is a good imitator. I read to him after his nap, so one day he did the same for Rose. When she kept wanting to grab the book and stick it in her mouth, Lee stood up.

Grandma Seelye said…
How sweet and thoughtful to post these for grandpa Stevens! I enjoyed them too! It was so fun seeing Lee's new tricks last night.
September 30, 2014 at 8:18 PM

Great Aunt Gretchen said…
These little videos and pictures are so sweet! I'm sorry that Grandpa Stevens didn't get to see them before he met Jesus face-to-face.:(
October 1, 2014 at 6:50 PM