An Experiment in Silence

By Abigail Joy Stevens November 13, 2014
I survived. The house didn’t burn down. My two-and-a-half-year-old didn’t eat my ten-month-old. I got out of the house for a walk. I had three meals and four visitors, and I discovered how little my words are actually needed in parenting.

This past week I went one day without speaking. I allowed myself to say, “Thank you,” “Okay,” and “Please,” to use sounds as signals, to read books and sing songs. And no, I didn’t sing my way through the day, making up songs about going potty or getting your shoes on for a walk. If a neighbor greeted me, I could return the greeting, although I found a wave worked just as fine. If someone called, I answered. And if people came over I would speak but with simplicity, not worrying about filling the silence or complaining about the day’s trials or qualifying my statements to manage what others might think of me.

Monday was my test day. I tried speaking as little as possible. And when hand motions or sounds wouldn’t work for Lee, I created lists of tasks with pictures. I explained each task to him as they came up: taking a walk, eating, napping, bathing, and going to bed. Each completed set of tasks earned a sticker. Three stickers earned three mini marshmallows. 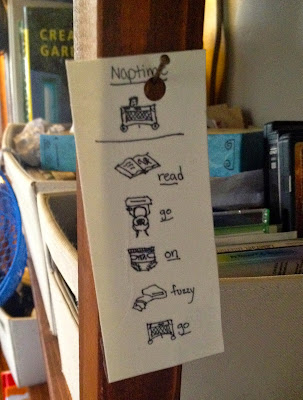 Tuesday was my day of silence.

On both days, the trial run day and the day of silence, Lee said numerous new phrases, describing things he saw and filling the silences with what I would usually say. When he nearly lost his balance on a stool, he said, “Don’t fall.” When he refused to put his foot into the sock that I was holding open for him, he said, “No sock. No walk.” After he ran away from me on a walk, and I told him he would be spanked for this, he said, “Being naughty. Whack a bum bum.”

As you might imagine with anyone who has lost a faculty, refraining from speech caused me to see and hear more. I noticed the many expressions on my children’s faces: puzzlement or excitement in their eyes, gnawing of their teeth/gums, or longing gazes outside. I heard the wind through the trees, and realized how quite our neighborhood is.

I discovered the power of being singularly focused. When Lee tripped running, I couldn’t say over my shoulder, “Ouch! That must’ve hurt,” and then continue on with whatever I was doing. Instead I had to stop, acknowledge his hurt with a concerned look, and if his pain was long lasting, I comforted him with a hug or back rub. For those few moments, I did nothing else. I suppose that made his pain feel legitimized.

I also discovered the power of simple and swift punishments. When he began to do something unacceptable, I would make a Na’ah sound. If he persisted, I would hand signal a flick to the hand. If he still persisted, I had to follow through. I couldn’t tell him why I don’t want him doing this or that. I couldn’t emphasis the dangers of what he was doing. Nor could I tempt him with some other activity.

This kind of parenting was a relief to the laborious and exhausting method of hoping that a clear explanation, a warning, and a threat will curb a desire to do evil. Less talk. More action. I like it. 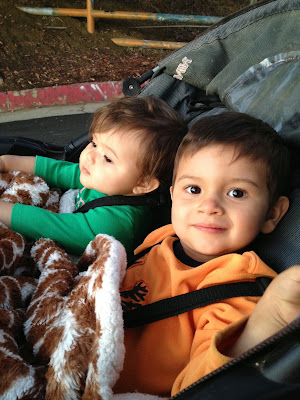