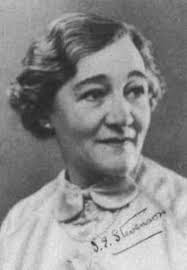 1. Her heroines are full of grace and know how to hold their tongues in most all situations.

2. Most of her stories involve a trip to Scotland where good food, picnics, tea, wild landscape, and a doting elderly lady bring about revitalization to a tired woman.

3. She accurately portrays difficult people. And then she shows how they are pitiable and need love.

4. She understands how the presence of children, an absence of housemaids, and no vacations make a mother exhausted.

5. She is able to create women who talk abundantly and sometimes in silly ways, but are still kind, unselfish, and likable.

6. She shows how WWII affected the everyday life of the simple people of England who stayed home and continued trying to have regular meals.

7. The romances in her stories don’t dominate her pages. They take a backseat to the comings and goings of everyday life.

8. She inspires me to describe the simple things in life like the style of my furniture, the types of clothes I’m wearing, or the view of the hills outside my front windows.

9. She understands children, both well behaved and naughty, timid and boisterous, well taught and spoiled.

10. Her stories always have at least one relationship where two ladies or a man and a woman feel quite comfortable to be in one another's presence without having to fill the silence with talk.

11. People in her stories are always eating pastries and scones and things with jam and marmalade.

12. I can acquire just about any of her novels by walking a block to the wonderful Robin Cox library.

13. She expresses truths in the midst of her fiction.

14. Occasionally, something exciting happens in her stories like someone nearly drowns or gets shot or is kidnapped by Nazis.

15. She understands the inner workings of an introvert.

“Mamie had withdrawn into herself (it was a habit of hers to withdraw into herself when other people were talking.)” — Music in the Hills

“He didn’t want to see anybody or to speak to anybody until he had got used to himself in his new circumstances.” — Music in the Hills

“It’s a fine thing to be engaged to be married. I remember when I was engaged I thought it was the happiest moment of my life . . . but there’s a better kind of happiness which comes later and grows with every passing year.” —Sarah Morris Remembers

“In new friends we start life anew, for we create a new edition of ourselves and so become, for the time being, a new creature. . . In creating a new Barbara for Jerry Cobbe, Barbara created a new facet of herself and was enlarged by it.” — Miss Buncle Married

“One need never be dull as long as one has friends to help, gardens to enjoy, and books in the long winter evening. And the hills. “ —Listening Valley

“It is a curious thing but true that those who make habit of saying unkind things are often the most easily hurt and offended when their victims retaliate.” — Music in the Hills

“Some people thought they would be frightened but were not frightened at all, and there were other people who were exceedingly brave in anticipation but who failed to maintain their courage when the testing time came.” —Spring Magic

"When you are young you are too busy with yourself—so Caroline thought—you haven't time for ordinary little things but, when you leave youth behind, your eyes open and you see magic and mystery all around you: magic in the flight of a bird, the shape of a leaf, the bold arch of a bridge against the sky, footsteps at night and a voice calling in the darkness, the moment in a theatre before the curtain rises, the wind in the trees, or an apple-branch clothed in pure white snow and icicles hanging from a stone and sparkling with rainbow colours." —Vittoria Cottage

Unknown said…
Well! I really like this post. I've never stopped and analyzed exactly what I love about D.E. Stevenson's books but I agree with you on everything. Now that I'm retired we should meet for a scone with marmalade on it. Or something. :-)
June 24, 2015 at 5:11 PM