By Abigail Joy Stevens November 01, 2015
A banana was running the Whittier's Spooktacular 5k. Two bananas actually. And a gorilla, Noah's ark, the standard princess-fairy-undead crowd, a six-foot-tall unicorn, a plethora of super heroes, and Thomas the train with his conductor and railroad crossing sign. 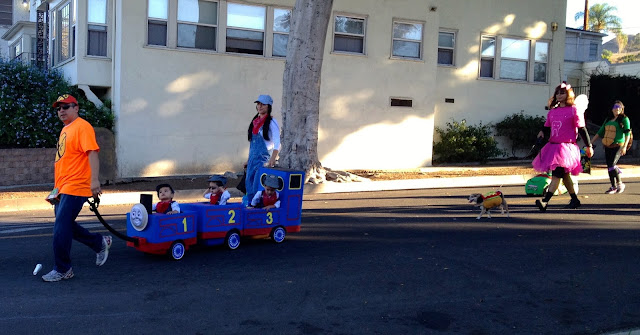 Halloween morning Phil, the children, and I sat on the brick seat-wall on the corner of Greenleaf and Broadway to watch the runners go by. The runners in first place were without costumes, but then came a high school track team wearing capes and various superheroes keeping a steady pace. Those that followed were obviously participating in the costume contest. Though, I can't imagine Gil Rodriguez and his staff of Sharpstone Realty dressed in their business attire were going to win any prizes. 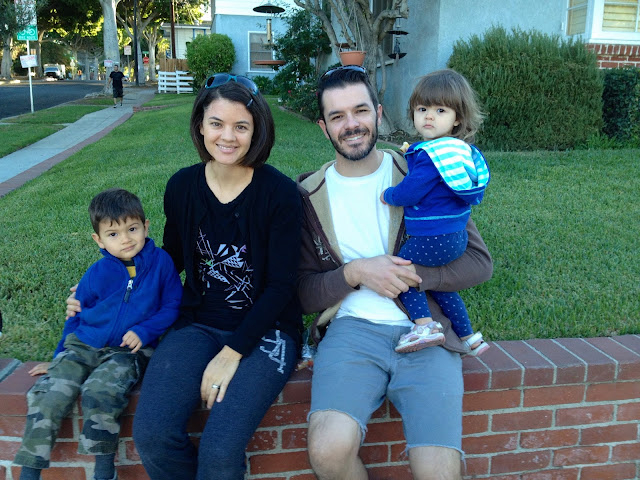 After the race we strolled home for a pancake breakfast made by Phil. Luke joined us for the meal too. 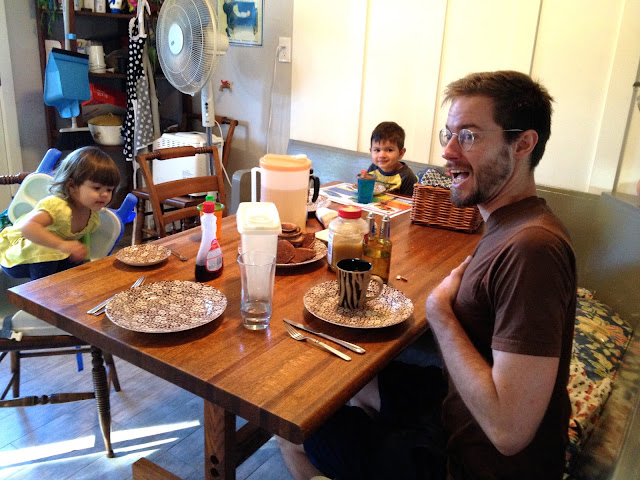 The rest of the day we spent in relaxation and preparation for the evening trick-or-treaters. Phil gave Lee a Black & Decker chainsaw and then demonstrated how to use it by sawing through a log on our front lawn. Lee took copious notes. 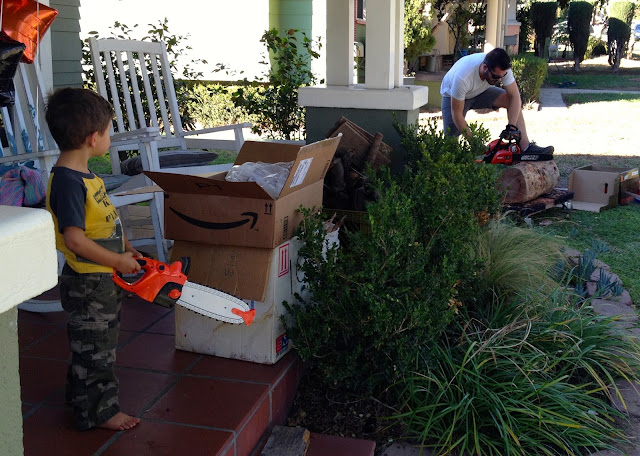 And Rose watched from inside. 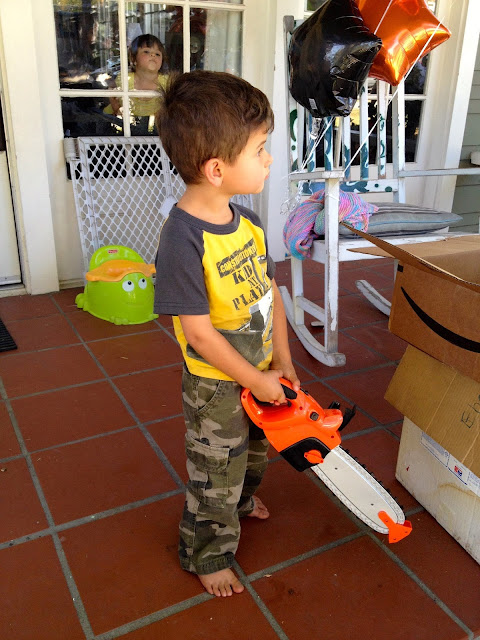 Phil also sawed a wedge in a log to serve as a seat for Lee the Lumberjack. Suspenders, beanie, painted beard, plaid shirts, and chainsaws. Rose naturally had to be a kitty and somehow I found myself in kitty clothing as well. I don't know how that happened. Thanks to Mama Mina, Rose had kitty make-up too. 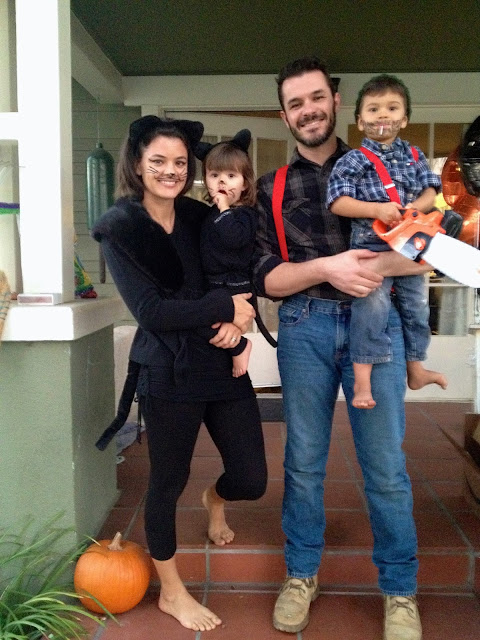 Our street was decorated for the crowds. One neighbor held her family party in her front yard. They had a chemistry-theme going there. Several other neighbors put up rather grotesque horror scenes and others decorated with lights and pumpkins and simple ghosts. They too got into the spirit with their costumes. We had a jellyfish umbrella, mad scientist, and a family of characters from Peter Pan. 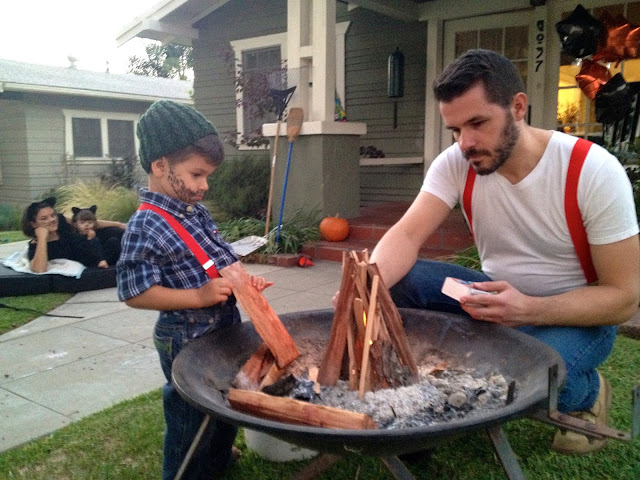 We had over a hundred trick-or-treaters this year. After comparing notes with our neighbors, we think the influx of children was due to the Saturday holiday. Phil is proud to say he didn't give away a single piece of Halloween candy. All the trick-or-treaters had to earn their treat by feeding our bonfire with slivers of sticks. Our evening highlights included visits from Thorpe, the Post, Jensens, and the company of the Himes. 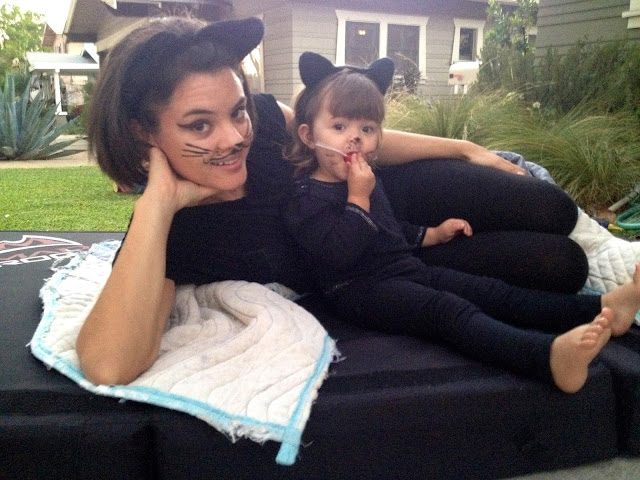 Great Aunt Gretchen said…
LOve all these cute pictures and details about your fun day!
November 1, 2015 at 9:20 PM

Gretchen said…
It was a fun Halloween wasn't it? I love seeing all the neighbors and we loved visiting your bonfire! =)
November 2, 2015 at 7:24 AM