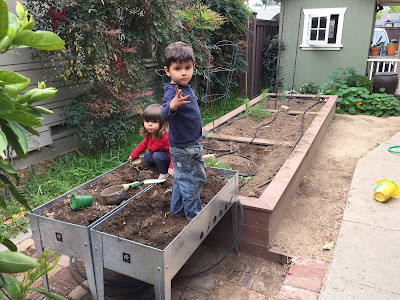 In the morning the fog rests around our home. The Whittier hills are concealed by it, and the tops of the Podocarpus trees are pale in it. Lee stands out on our breakfast porch, walled in on three sides by house and fence. He gazes up at the window of white above him, and when he comes back inside he says, “I just been smelling the air out there.”

Today I will configure the garden: a preliminary step to planting when winter neglect has made the garden a catch-all for various uses. Lee has turned the soil with his shovel, rake and backhoe. Rose has swept the dirt out of the raised beds and onto the DG as if this were a way of tidying up the place.

As a collector of succulents, Phil has stuck several Jade stem-cuttings into the garden and there they have taken root and grown like little trees. Last year’s fennel seeds, scattered into the compost pile and later transferred to the planting beds, have sprouted and are now sturdy enough to endure the children sampling their newest unfurling fronds. My parsley from last year, which survived the winter shade, now is located in a most inconvenient spot. Why did I decide to put it there? 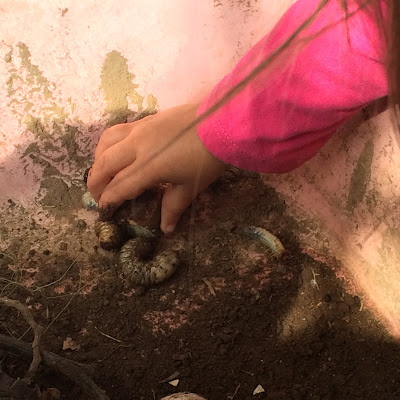 Japanese Beetle larvae have found comfort in the warm moist soil, as have pill bugs and earwigs. A new visitor has made a home there too: gray cutworms with their copper-colored larvae. They’ll grow into moths by the summer, but before that they’ll fell my spring crops like lumberjacks. I can either hunt the little beasties at dusk, delay my spring planting or sprinkling some diatomaceous earth around the soil.

Our neighbor’s roofline will keep the garden beds in shade for another month or so, so I can delay planting for a spell. In the meantime, I reward the children a coin for each larvae found. We make a game of it with the younger Jensen boys when they come to play on Friday. 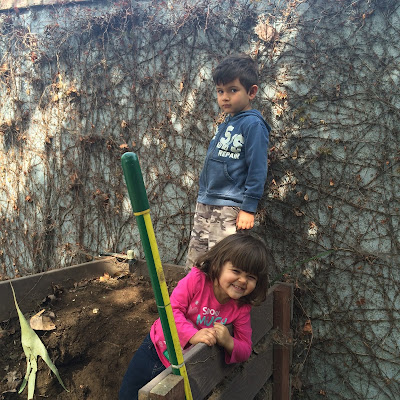 I unfasten the latches on the compost pile and peel back the gate to the squeals of eager children. They are ready for the hunt. They are ready for the dirt. Gigi Jensen and I take turns eroding the layered block of rich dark dirt with our shovels. We hack at the sides and little avalanches of soil come tumbling out. Ollie makes a slide of it. The soil is hiding huge white Japanese Beetle larvae and long wiggling earthworms, a good sign that our compost pile, though neglected for most of the year, has indeed turned out some ripe and ready soil. Egg-shells and avocado seeds have yet to deteriorate, but these are easily removed. 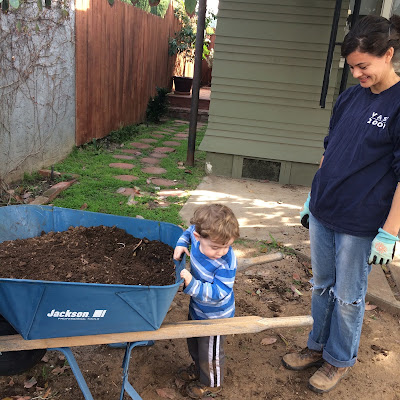 While I fill the wheel barrow and wheel the loads over to our garden, Lee finds various bugs and shows them to Rose, telling her to either leave them alone because they are good bugs or to smash them because “they’re ewwy" or to kiss them for what reason I don’t know. I assume because compliant Rose will do what he won’t dare. Once I overheard him saying, “Now eat it, Rose.”

She has no concept of “ewwy” yet, and will allow a grown larvae to entertain her by letting it burrow into the soil only to dig it up again and laugh at it. It’s like peek-a-boo . . . with grubs. When she tires of that game, she’ll throw the white wiggling larvae into our pot fountain or maybe she’ll smash them or simply forget them, allowing them to escape for their lives into the dirt again. 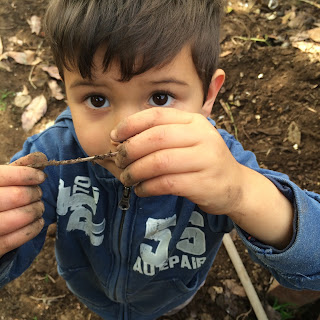 The soil is good. It’s the color of ground coffee beans. And it smells like damp goodness. In my raised beds, I form three rows parallel to the roofline, and in my portable beds, I make mounds for melons and pumpkins and squash. When these trailing plants start to meander, they’ll spill out of the beds and onto the brick pad beneath them.

We leave our shovels and muddy boots by the door. It’s bath night tonight. Later in the week, we’ll take last year’s seeds out of the freezer and visit Mama Mina’s house to select a few more seed packets from her big glass jar. Lee will accurately identify the pictures on most all of the packets that we choose. He has high hopes for our garden. This is, after all, his fourth garden, not counting the very first one made in the two weeks after his birth. So he knows how the seeds grow and produce good things to eat. He knows that he must wait many long months. He knows that he must not disturb the dirt. And he knows that we always begin this process by the shifting of the soil. Step one: complete. 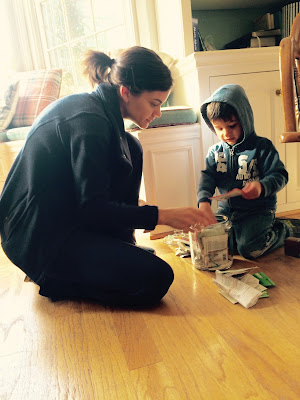 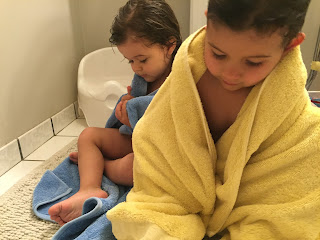 Great Aunt Gretchen said…
I just the fact that you are including the kids in this fun gardening process! :)
March 9, 2016 at 7:38 PM