Everything I Learned in 4 Weeks of Tae Kwon Do

By Abigail Joy Stevens January 19, 2017
The class was filled with teenagers—black-belt teenagers ranging from ages thirteen to eighteen—and one grandfather who also had a black belt. Then there was Phil and me in our stiff white belts that were trying to hold down our stiff white uniforms so that we didn't look like we came to class in giant folded sheets of origami.

I'm not sure why our uniforms felt like they were made of canvas tent while everyone else's looked like a black polyester-cotton blend. Oh well. The uniforms came free along with four weeks of classes at Victory Tae Kwon Do in Whittier.

This is where our four-year-old, Lee, started Tae Kwon Do in October. And after two months of classes, he was still cowering behind me as we entered the gym, and refusing to walk onto the mat at the start of class. Although, he had no problem instructing Rose in the moves at home.

One day he brought me the informational sheet for belt testing and a promotional coupon for someone to take a free month of Tae Kwon Do. And that is why Phil and I showed up one evening to work out with the teenagers. We figured that if Lee saw us working out on the mat, he'd be more eager to join his own Tiny Tigers class.

To be fair, a few more white belts joined our ranks over time. And yes, there were a number of orange, purple, and brown belts too. But when you're in white, everyone else looks like a ninja.

I'd forgotten what it feels like to know nothing while everyone else seems to know everything. Actually, correction. I feel like that quite frequently as a parent, but at least no black-belt parents are raising their children in the other room and occasionally peaking in at my progress. 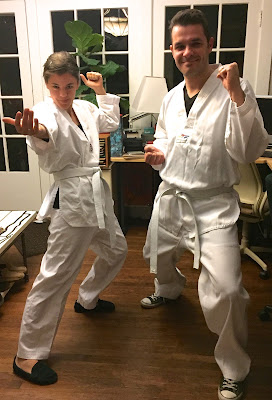 It was a good place to learn to think a little less of myself. To bow to instructors and students alike. To take direction from sixteen-year-old assistants who called me "ma'am." To answer "Yes, sir!" when I really wanted to say, "But I'm just not that flexible," or "But my foot keeps wanting to turn this way," or "But I haven't done push-ups since High School," or "Oh my gosh! I'm so sorry for kicking your hand. You really should get a bigger clapper for me."

I guess the mind is stronger than the body now.

Phil took Karate in middle school and at one point in my life I could do handstand push-ups. But I think we were fourteen then. That is to say that after our first class of push-ups, squats, splits, and sprints, I couldn't raise my arms above my head and Phil couldn't sit down without groaning. Really!? Was I really the only girl who had to resort to doing girl push-ups? Yup. I guess girls are at their physical peak at fourteen seeing as the girl opposite me was doing one-handed push-ups. It's all down hill from there, girl.

I suppose its time to accept some God-made limitations.  Nevertheless, I did catch myself day-dreaming about my instructors saying, "And now we will count our jumping-jacks in Greek," or "Everyone who doesn't know how to make chicken stock must do 50 pushups," or "Next week I expect a 500 word essay on what you think about Tae Kwon Do," or "If you think this is hard, try birthing a child."

Aside from the workout that made us sore for four weeks straight, we learned a few Korean words—which we regularly butchered between ourselves at home—, a choreographed sequence of moves called a Kata, and how to do a hammer punch. Phil already knew the punching bit, and they let him pound on the thicker boards. I was stuck punching foam boards in a slow haltingly way—Okay, I think I squeeze my fist like this. Yes. That looks right. Then I guess I need to pull my arm back. Yes. That's what the other guy did. And then I hit really hard while shouting KIHAP!

It was the start of week four when I noticed the rip, and suddenly I remembered having gotten my pants stuck on a Tae Kwon Do trophy at the beginning of week two. I actually bent the engraving plate 90 degrees before realizing I was stuck. I turned red, bent the plate back, and asked Phil if my pants were ripped. He'd said no, so I'm hoping that that rip occurred in the laundry and not in the middle of class while we were doing push-ups. After all, I'd continually washed the heck out of those uniforms because Phil's pants were always dirty from wiping his feet on them throughout class.

Yes, I attended our last two classes with a sewn seam on my butt while being acutely aware of just how long my jacket hung down in the back.

I guess the experience has taught me how to be a beginner again. It's awkward and humbling and scary. And I don't blame Lee for hesitating to join Master Johnny and Master Michael on the mat. I'm proud to say that after all our labors, he now enters class with very little hesitation. Preschool is another story. But I don't think they offer preschool for adults. 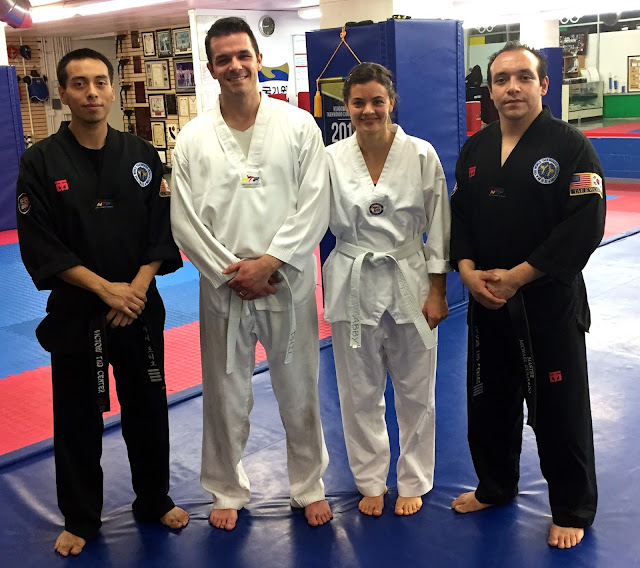 MommaMina said…
Ahahah! I loved reading this Abby- it's so YOU. I felt similarly out here donning scuba gear and falling into the water backward while outfitted in awkward space gear. Learning does keep us humble. See you soon!
January 21, 2017 at 2:34 PM