Boy in the Suburbs 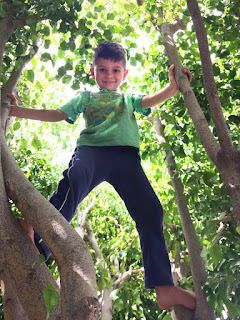 In the womb my boy was bathed in testosterone, which actually altered his brain completely. It made the connections between the two hemispheres of his brain less efficient. That means the locality of speech in the boy's mind is limited, making it far more difficult for his speech to link up to his beliefs and feelings (Dobson, 19-20).

So when I pick him up from pre-school and ask what happened in his class, he is silent for a long time or throws his blanket over his head or kicks my car seat or reports on what he ate for snack.

He also has less serotonin in his brain than girls do. Serotonin facilitates good judgement, pacifies and soothes emotions, and controls impulsive behavior ("Serotonin and Judgement" as quoted in Dobson, 25). Take that coupled with a larger amygdala, which fires off irrational and electrical responses when threatened or challenged, and you get a boy's brain (Dobson, 26). 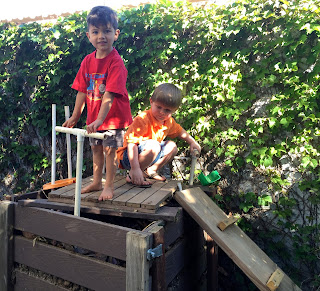 When his sister beats him to the car in the race for non-rotten-egg-ness, he says not a word but slams into her and knocks her down. "I'm so angry that I lost the race!" he says not. "I wanted to be the winner!"

When his sister antagonizes him and he strikes back, causing said sister to scream and his mommy to punish him, he starts dumping out kitchen drawers and throwing his sippy cup on the floor at the injustice of it all. But he never mentions that little sister Rose started it.

"Testosterone is [also] a facilitator of risk—physical, criminal, person" (Sullivan as quoted in Dobson, 21). It is partially responsible for "social dominance" too. And men have ten to twenty times as much testosterone as women (Dobson, 23).

Perhaps that is why my boy chases our pet rabbit around the yard while wielding a PVC pipe, and why he wants to establish a pecking order whenever we invite friends over to play. With the younger boys, he is bossy, challenging, and frequently attempts to thwart their games. With the older boys, he tries desperately to keep up. And if he can't keep up, he'll put his back against a wall and watch with a mixture of fear and admiration.

When I catch him disobeying, he will often charge at me, thrust his face into mine and glare at me like a charging bull. "Are you still the boss?" his actions say to me. "Because I want to be the boss if you don't!" If I don't daily remind him who is in charge, he will usurp me in the blink of an eye.

Yes, the risk factor also manifests itself in exploring the outer boundaries of places and objects. How far down the sidewalk can I go while Mommy is unloading baby sister? Can I cut a peep hole into the roller blinds? I bet I could climb on top of the car. What are all these things inside this box and what good would the box be without those things in it? What does dirt taste like? How can we turn this into a chasing game?

Loud noises, fire, knives, dangerous animals, ocean waves, heights, destruction. All sort of exploration can go south when unsupervised, which is why I believe that if I leave the boy to his own devises, I will probably deserve whatever he's going to do to me.

Supervision, structure, and civilization. I have to ease him in and out of change. Give him the cold hard facts. Put words to his emotions. Give grace when he rages. And love him to death: love him with hugs and words and treats and just sitting by him and watching him play with his trucks and dirt.


Dobson, Dr. James. Bringing Up Boys: Practical Advice and Encouragement for Those Shaping the Next Generation of Men. Wheaton: Tyndale House Publishers, 2001.

"Serotonin and Judgement," Society for Neuroscience Brain Briefings (April 1197) as quoted in Dr. James Dobson's Bringing Up Boys: Practical Advice and Encouragement for Those Shaping the Next Generation of Men. Wheaton: Tyndale House Publishers, 2001.

Sullivan, Andrew. The New York Times. As quoted by Dr. James Dobson's Bringing Up Boys: Practical Advice and Encouragement for Those Shaping the Next Generation of Men. Wheaton: Tyndale House Publishers, 2001.

Gretchen said…
Yep! Lately Lars has been doing the charging with a mean "bull face" when I tell him "no". I am NOT having it. Lol
The pecking order, the outbursts... we've got it all over here! =)

Great Aunt Gretchen said…
It really does help to understand boys better, when you read this helpful information. Hang in there, Mama!
July 11, 2017 at 3:49 PM