By Abigail Joy Stevens July 18, 2017
The invitation went out. Disney had invited Granada Heights Friends Church choir to join with other voices in singing "The Circle of Life" at D23, the ultimate Disney fan event. D23 stands for Disney and 1923, which is the year that Walt Disney came to California and founded what ultimately became the Walt Disney Company. The expo is a chance for die-hard Disney fans to get inside information on the Disneyland parks and movies. 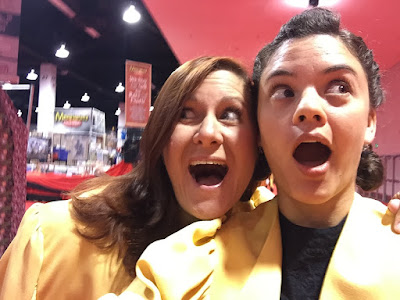 I am not a die-hard Disney fan, but I do like to sing and have adventures, so with little more than a practice or two, I arrived at 5:30 am at the Pumbaa Parking Lot. Great big signs directed us to where we were to park, where we were to sign in, and where we were to stand in line for the shuttle that took us to the Anaheim Convention Center. They punched our names into their highly organized system on ipads. They checked our names off a list. They collected our consent forms and gave us purple entrance bracelets.
From there we followed the flow of people to clothing racks where we were sized up in one look and given golden choir robes. We filed past expo rooms all set up for the fans' enjoyment. We were not allowed to enter these parts because they were for the Disney fan club members only. But that was alright. We were jittery with excitement about our role in this event. 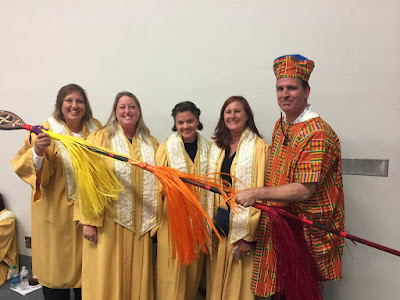 In the convention's amphitheater we were assured that none of our human blunders or lack of practice could ruin the show, which was going to be the grand finale of a Lion King presentation featuring interviews with the producer, director, animators, and several actors in the movie--Don Hahn, Jim Cummings, Rob Minkoff, Ernie Sabella, and Whoopi Goldberg.
We were to follow our assigned line leader up the aisles, crisscrossing with other lines at the intersections and thus participating in a rather daring game of frogger, until we arrived at our assigned positions. During all this we were to sing the opening verse of "The Circle of Life" and the accompanying African tribal chant. There was no need to worry about getting the words right as we would be singing along to a sweetened track with recorded voices. And there was no need to sweat the choreography either as we were to follow the choreographer herself who was elevated and lit up on a platform at the back of the amphitheater. There was really very little we could do to go wrong aside from tripping over our own feet. And some didn't even have to worry about that as I spotted several performers in wheelchairs who would be pushed into positions. One of them had a helper dog also dressed in a golden robe and stole. 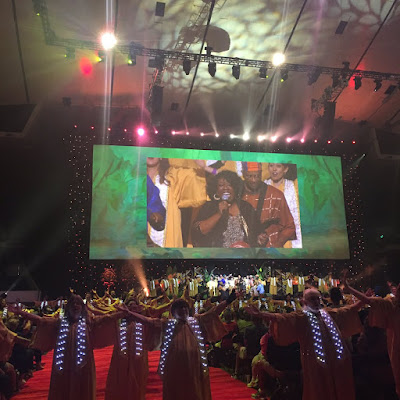 The stoles were sewn up with LED lights that would turn on and blink in synchronized patterns when controlled through Blutooth by . . . somebody. Who knows how many invisible programmers and button pushers were behind our performance--sound technicians, light crew, refreshment coordinators, etc. 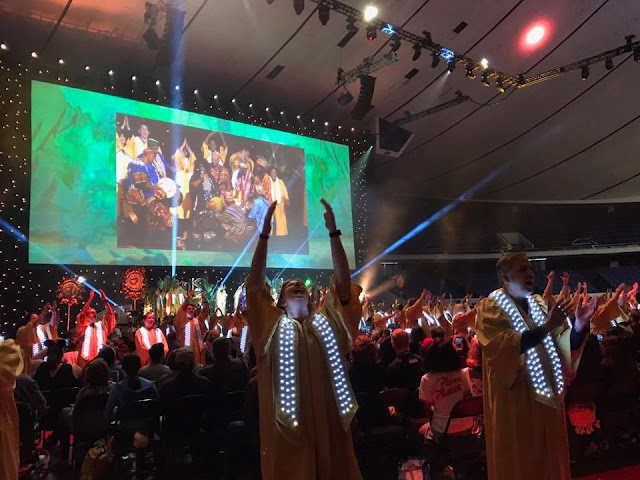 I suppose the kingdom of heaven is something like that. All we have to do is show up and put on the given robes and everything else is done for us by the Holy Spirit. We're lit up, given words to speak, shown how to move, led where we need to go, given refreshments, a room to rest, and a free gift at the end of the show: eternal life. That is not to say that life in the spirit is effortless and Disney did request we show up with black pants and show up on time and bring ID. I guess the analogy breaks down upon any more examination. So let's end this by saying the kingdom of heaven is even better than a Disney production. 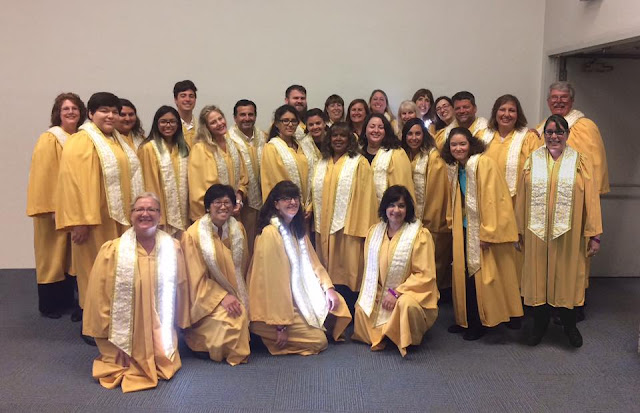 Unknown said…
I think as we live in God's Kingdom here on earth, all we need to do is show up. Too often we try to coordinate everything ourselves and then it gets mixed up. So what if we show up and trust God to coordinate and look to Him for direction and for His love, grace and forgiveness to redeem what we might mess up. You are so right Abs...heaven will be far better than Disney....but His Kingdom here on earth, as messy as it is, can have it's adventures if we just show up.