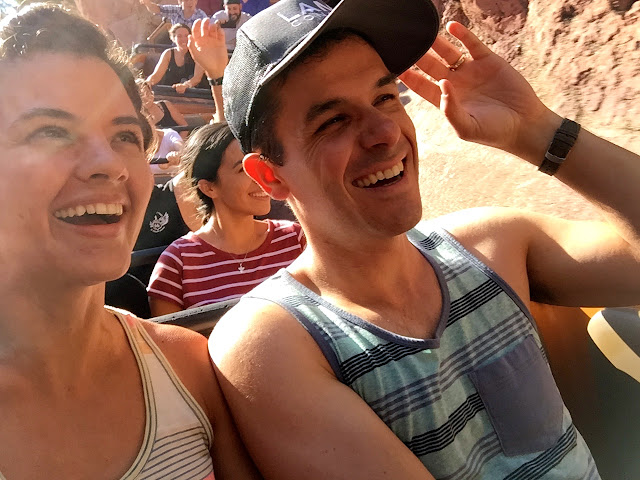 No, ten is not so much. But it is something. And as I write at ten, I feel proud. And triumphant. Ten! And there is love left for romance and surprises and peace and respect. Ten and no malice has taken root. Ten and hope is not crushed. Ten and he still tries to call me every day at lunch to hear how my day is going. Ten and I still like him.

We have made it this far and it seems remarkable because I’ve seen wives with fewer years than ten who no longer see their husband as desirous and extraordinary but as an idiotic child or a clumsy extra appendage or a prison cell. I sorrow for them. But I do not wonder how it happened.

I've slipped and slid along the way myself, seeing the start of corrosive habits that turn me heavenward to say, "O God, No! May I not lose all awe of my husband. May I not come to despise and divide, scorning the one that I've chosen. May I not say:

In these ten years I have seen how the more I blame, the more I separate the “I” from “us.” The more I complain, the more appalled I become at my own union. The wind goes out of my sails and the life out of the one flesh. With my own hands I tear down the house where I'd hoped to find unwavering support, supernatural strength, unconditional love, perfect foresight, and all-knowing understanding. I tear down the temple to my gods. And go looking elsewhere.

I've seen my feet slipping down that way and I call for help, then look for another way to go. The way of laughter and tears properly placed. The way of worship and faith rightly assigned. And the way of the fight, yes the fight against worry, blame, and wishing. The less trodden way: that is the way I wish to go.

I want to be the woman who believes that her man is just as worthy and capable as herself. The woman who knows that her husband was made to reflect God in a way that she doesn't. Who trusts that God is better at shaping his heart than she is, and who proves it through prayer. Who stands back and remembers that if her husband were to shed that clumsy flesh from off his soul and to stand before her as a reborn man, then she would most likely be tempted to fall down and worship him.

I’ve seen it done. I've seen ladies look at their husbands like this. I’m surround by examples in my family and church. And the more I watch them, the more I see that this is not some special training that a wife undergoes to respect her husband. This is how she sees everyone: her brother and sister, mother, father, in-laws, friends, and enemies. She has stopped making gods of them or expecting them to treat her like a god, and instead she loves them as she loves herself.

There is no perfection in these relationships.
There is one day good and one day bad.
There are words spoken in haste followed by time and apologies.
There is chocolate ganache and candles,
Then there is broken glass and blood and doctors.
There are times of silence and times of waiting.
And times of doing what you’d rather not do but you do anyway,
and thus learn a way that's better than your own.

That is the way I pray I'll go. And you too.

Unknown said…
Abby,
You’ve caused me the inconvenience of removing my glasses to finish reading the entire entry. I had to wipe the tears that blurred your very important, God inspired words. Thank you for wanting to agree with God, that’s the underscore of abundant life. Thank you.
March 27, 2018 at 1:27 PM