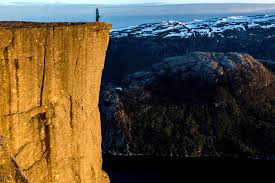 I’m of the belief that God is involved in everything. I don’t think he set up the laws of nature, such as gravity, momentum, and centrifugal force, and then let things go like a wind up toy. I think he upholds and maintains everything.

He not only put the sun in the sky, but his power presses gravity inward on the sun’s core to continue the nuclear fusion that keeps the sun burning every hour every day. He not only made water, but he continually holds the oxygen and hydrogen bonds together to prevent their separating. He is always loading electrons with the power behind electricity. He is always propelling the celestial bodies. He is always pumping energy into every plant and animal cell. Without his hand upon every aspect of our world at every moment, the world’s natural laws would stop working.

However, God also made mankind with a power somewhat like his own to influence and change the world. This means that God causes our choices in the natural world to be effective. He actualizes our choices, so to speak. For example, when we lie, God respects our choice and instead of silencing our words, he sees to it that the sound waves travel to those who are listening. When we raise our hands to strike someone, God contracts our muscles to operate according to our ill intent. And when we decide to turn away from the Lord, God continues to fire the neurons in our brains that make this rebellion possible. He both made us and makes our refusal of him possible. That’s what it means to have freewill.

This doesn’t mean that God causes our evil to happen. Evil is our decision to operate contrary to God’s laws. The results of our choices—broken bones and broken relationships—are how God causes our choices to have effect. It’s like God saying, “I will not change my gravitational laws if you choose to jump off a cliff. I will respect your choice and continue to be the force behind gravity even if that means killing you.”

So when we eat too much, God expands our fat stores to accommodate for the excess. That’s how he made the human body. When we miscalculate the load factor on a bridge’s pylons, God maintains gravity’s pull on the bridge until the pylons crumbles.  And when people get caught on the bridge when it breaks, God bruises or breaks according to the strength that he set for our flesh.

This doesn’t mean that God enjoys our suffering or that he is out to get us. “For he does not afflict from his heart or grieve the children of men” (Lamentations 3:33 ESV). Rather, God causes the pain because he wants us to be beings with power instead of ineffective soft dolls.

Thus, things like cancer and plane crashes and volcanoes and bombs are not actually evil. To say these things are evil is like saying that the spankings or time-outs that we give our children are evil. No, the consequences are not evil; it’s the choices themselves that are evil. The consequences, horrific as they may seem, are evidence that God respects our choices. They’re also evidence that we aren’t using our power properly, and that, although we have power, we’re still under the ultimate power of God’s laws. We cannot escape the consequences of what we’ve chosen.

Certainly, the world wouldn’t be this way if we’d respected God’s laws. For just as we—and by we I mean mankind—fail to respect gravity and thermodynamics and load factors, we also fail to respect the moral laws that God established. The first one being: “You may surely eat of every tree of the garden, but of the tree of the knowledge of good and evil you shall not eat, for in the day that you eat of it you shall surely die” (Genesis 2:16 ESV).

When God told Adam and Eve this, he wasn’t testing them or threatening them or sharing his personal preferences. He was explaining to them how their inner machines operated. And the human machine operates best through relying on the Lord for our understanding of good and evil. The tree’s fruit, real or symbolical, was the choice to acquire a moral understanding with or without the Lord. We chose to acquire it on our own, and God respected our decision. It was like God said, “If you prefer your own good over mine, I will respect your choice and not force you to be on my side. Though it grieves me, I will let you feel the consequences of living without me.”

It would be nice if the Lord could just intervene against his own laws. But just like he doesn’t stop gravity to save us from death, he doesn’t stop the consequences of living a life apart from him. That would be robbing us of our choice. It would be like God saying, “I know you’ve chosen to have your own good, but I’m going to make you choose mine anyway.”

Unfortunately the solution isn’t as simple as changing our minds. See, we are all rather like lemmings that have thrown ourselves off a moral cliff. It doesn’t matter if we change our minds mid-fall. We can’t stop the plummet. Even for the one who decides he or she is going to be really good, they’ll find that they keep slipping up. They can neither act perfect nor be perfect. And by definition, that’s what God’s moral law asks of us. If we wish to be with God, we must be with him in all things.

No, God cannot undo the laws of gravity to save us from our plummet. But he has inserted one more factor into the mix, and that is the option of falling upon his son who then absorbs the force of our poor choice. That is the only way to prevent moral death.