By Abigail Joy Stevens September 21, 2018
Set out this morning to Hoover Elementary school. The morning had a tinge of coolness, a precursor to fall. It inspires me to decorate with pumpkins and start using the oven again. In his stroller Benny gazed heavenward, turning to the right and left with quizzical looks. I don't think he can see the branches of the podocarpus and ficus and magnolia trees, but he sure does give that impression. 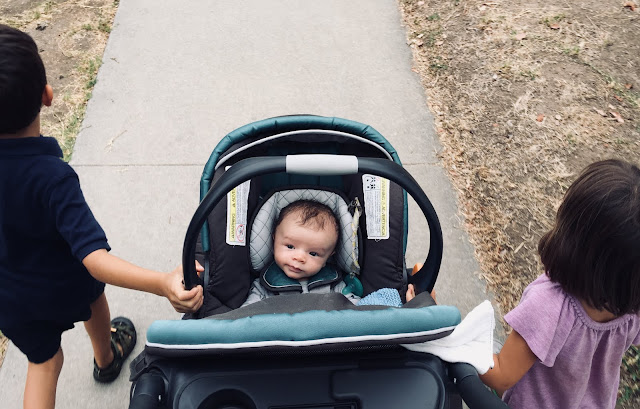 The children sprint ahead and chase each other around the stop-sign pole. At the corner of Broadway and Greenleaf sits a man on the edge of a brick pilaster. He looks like a sailor with his worn attire and leathery skin. He is smoking. 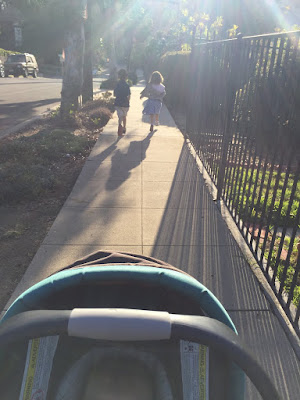 The man waves his hand with the cigarette. “Oh, it’s just a thing," he replies.

I've caught up to Lee by now but I haven't any idea what I ought to say to either man or boy. So I say nothing aside from the regular announcement that we are now crossing the street. Walking fast seems like the best option at this point.

“It smells like skunk!" Lee postulates loudly as we step onto the crosswalk.

"Lee! Don't talk about other people like that!" That's what I wanted to say, but we were still within earshot of the man and once again my embarrassment strikes me dumb.

I didn't realize until my return home that there actually was a dead skunk laying in the gutter not far from where the old sailor smoked. Of course, seeing the skunk caused me to be even less sure of what I should've said. I just hope the man knew he was sitting beside a dead skunk.

We continue up Broadway. The children pretend to be chickens by flapping their elbows. Occasionally, they stop to gather flowers or scratch their mosquito bites or skirt a gate with a barking dog. Partway up the first block, they sit on a picnic bench that's on rollers in someone's front yard. I'm tense as they do this for fear that the owners will come out and see us and . . . well . . . I don't know what they'll do. Probably just give us a scolding or a dirty look. Yes, I think it's the scolding that I fear or perhaps the accusation that I've allowed my children to do something they shouldn't. What sort of mother must I be! Letting my children play in other people's front yards! However, I highly doubt that the owner of that house enjoys his roller picnic table as much as my children do.

Further up the road we pass by what the children once called the witch's house. It's an alley house with peach stucco, black awnings, and Spanish roof tiles. Their front yard is tidy even though it is crowded with various animal and angel statues, a parrot cage, bird baths, and gnomes. On the sidewalk leading up to the door is a life size replica of a growling black bear. It must be the bear that inspired the name "witch's house." The children peer at the various objects behind the wrought iron gate as we walk by.

One day we saw a man coming out of that house. He was carrying a little girl's princess dress. Rose gazed wide-eyed.

"I'm just going to give this away," the man said to me. "Would you like it for your girl?"

Further up the block, Rose scolded me. "Mommy, I wanted that dress! Why can't I have it?"

I wasn't sure of the answer. Why couldn't she have that dress? Did it matter that that man was a stranger? Was it rude to say no? Was it strange to say yes?

I'm really a most dumbfounded mother about almost everything except questions that can be answered "no." Since that day, the children have ceased calling it the witch's house. As we near Lou Henry Hoover Elementary, more families join us from the adjacent streets. Lee calls hello and urges me to catch up to other families. I ask him if he knows the other people.

He can tell because of the uniforms: red or navy blue, cotton polos and khaki shorts. Rose has already explained to me on multiple occasions what kind of jumper she'd like to wear when it's her turn to go to kindergarten. "A little skirt with little folds going up and down and with little shorts underneath," she says.

We encounter two crossing guards on the way to school The first one has a white mustache and tanned skin. He wears a neon hat and vest and never smiles or speaks. He grunts and makes vague hand signals. I've tried "Good morning" and "Buenos dias" and "Thank you," but the most I've gotten out of him was a throat clearing.

The second crossing guard is always smiling and greeting us, "Happy Monday!" or "It's minimum day today, my friends." 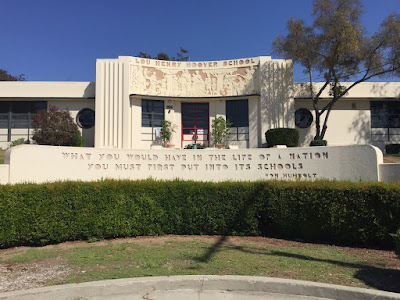 I hug Lee goodbye, if he'll let me, and then watch him march up the cement steps and in through the double doors beneath the art deco stone carving.

"I think you mean exhausted," I say.

Rose rides on the stroller's handle on the walk home. Benny is usually asleep by then, but this doesn't stop Rose from talking to him off and on. She tells me about her five-year-old birthday party plans or she describes her Halloween costume that has yet to be purchased. At least once, she'll request a Bigwig story, which are stories I make up about our rabbit trying to escape from our backyard. But I like to save these stories for teeth brushing or bedtime.

On Camilla we pass a man using an electric waxer on his vintage red mustang. He is so intent on his work that he takes no notice of us. I make a split second judgement about the futility of something so temporary while Rose comments, "Mommy, that car sure is shiny." 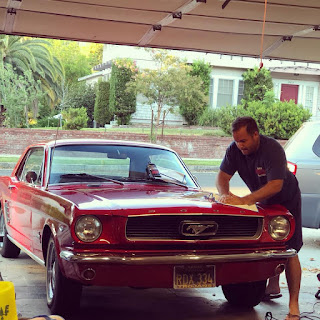 Later, I take Rose to preschool, return home to feed Benny, and then put him down for a nap. After a snack and some tea, I check facebook and am surprised to see one of my facebook friends has posted a picture of her husband waxing a red mustang. I've never met this gal, but I've been blessed by her candid posts over the past few months. She recently lost her mother-in-law.

The text beneath the picture reads, "Today I came outside to yell at him for not helping me with the kids and caught Drew waxing the Mustang his mom used to drive in high school. I slowly backed away. Grief is weird."

This rare window into another's grief has properly placed my split-second judgements. In fact the situation causes me to question my assumptions of all the people I see on my walk: the smoking sailor, the crossing guard, the owners of the rocking picnic table, and the families walking to Hoover Elementary. What if I assumed everyone was a facebook friend grieving? Sure would cause me to look and think with more grace.