By Abigail Joy Stevens October 26, 2018
Watching the atrocious manners of my children at dinner prompted me to make a mental list of all the things I thought I ought to teach them in the next twelve years. But that list became so lengthy that I gave it up to ask myself what was the most important thing. What, above all else, did I wish to teach them?

The answer had nothing to do with refraining from potty-talk at the dinner table, though I do hope that on their first date, they don’t lean across the table and say, “Did you smell my fart?” and giggling uncontrollably.

I know what grace isn’t.

Grace also isn’t believing the best about my children. I’ll become a Petunia Dursley in no time if I think my son merely had a case of sunstroke when he lied in order to one-up his sister. Neither is grace repeatedly keeping my mouth shut when my kids drive me bonkers. That will just eventually lead me to an outburst. “You have no idea how good I’ve made life for you! You don’t appreciate me!”

Rather, I think grace is wishing my children the best regardless of their imperfections.

Wishing the best for them doesn’t mean wishing them my best or my idea of their best. It means wishing them God’s best. And because I’m not omniscient, I don’t know what that will look like. I know that God wishes for them to find their identities in him, but I don’t know if or how that will happen.

Somedays I think I do. Somedays I think I know how everyone ought to find their identities in Christ. But when I do this, I'm like the older son saying to his prodigal brother, “I know what you should do. You shouldn’t run away from father at all but stay here and do what I do.”

Sure, if the prodigal hadn’t run away, he wouldn’t have squandered his father’s money and lived wildly and possibly contracted an STD or fathered a son or given himself some brain damage with drugs. But then he also wouldn’t have come to his senses and returned to his father with all his heart.

I can pass on that grace to my children by allowing them the freedom to choose what they want without fearing my wrath. I want them to know that I’ll treat them with respect and love regardless of what they do, that I will not spite them for their mistakes or require them to jump through hoops in order to get back into my good graces. I won’t keep track of how many times I’ve forgiven them or try to get them to understand how badly they’ve wronged me. 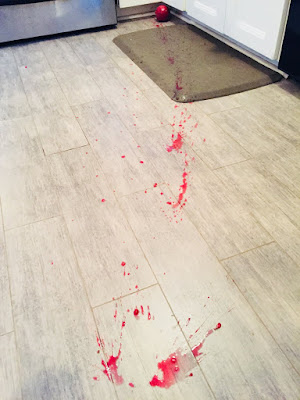 But that’s awfully hard to do when their behavior is shocking. They’ve just thrown a pomegranate across the kitchen because they were mad and then screamed to purposefully wake up the baby. It’s hard because when I ask them to set the table, they claim that I’m treating them like a servant. They complain about not being able to do anything fun while I am planning meals or separating their laundry or trying to coordinate an outing. Can't they see that I’m serving them hand and foot? I certainly don’t throw pomegranates. And surely no one has to make such allowances for me.

Too frequently this is my method for deciding if someone is worthy of my grace. If I don’t throw fruit when I'm angry, then I think it's fair to expect the same from others. But while I may be right about my assessment of our different weaknesses, I am missing one big thing. There is one person who I have inconvenienced terribly. One person who has made one huge allowance for me.

Just because I don’t throw pomegranates when I'm angry doesn't mean that I’m handling my anger by relying on Christ's justice. Both the violent and the simmering acts of anger are in rebellion against God, and both acts God forgives.

I am equally in need of God's grace as my children are. It's what I must remember in order to have real grace—not fake grace which measures and compares and credits. No. The only way to stop feeling like others owe me for what I give them is by giving away someone else’s grace. God’s. Only when I’m filled with him can I pass on what he’s given to me. Only when I say, “I’ve got nothing. Your turn,” can the grace flow freely to my children.

That is my prayer for me and for you.

Unknown said…
This reminds me, and I’m not sure why, of the time when I had just spent a couple of hours rescuing dad out of a off-road dilemma. And coming back to our home in the mountains I thought I locked the keys in the car. ( our extra keys work back in Whittier two hours away) When I told him about it in front of our neighbors she saw my distress, and quipped, “ Fred has got nothing on you.” Grace extended is a relief to us with active consciences.
October 26, 2018 at 7:46 PM

Susan Spahn Gaines said…
"The only way to stop feeling like others owe me for the allowances I give them, is by giving away someone else’s allowance. God’s."

More than once when I would scold my little boy the Holy Spirit would whisper in my ear, "That is exactly what I want of you."
October 27, 2018 at 9:42 AM