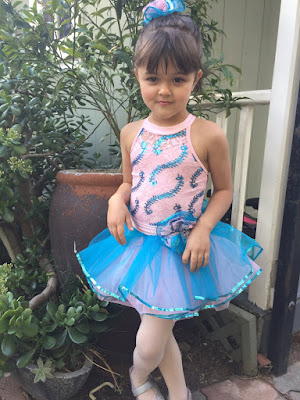 This December Rose had her first ballet performance at the Whittier Community Center theater. She was one of the Marzipan ballerinas in the Nutcracker, dancing with her 3-4-year-olds class. She relished the glittery sparkles in her costume, having her hair and make-up done, and admiring the older ballerinas in their elegant costumes. The whole family went to see her, including Mama Mina, and Grandma & Grandpa Stevens. I think Grandpa Stevens deserves a gold star for that.

This December we delayed the Christmas decorations for few weeks due to illnesses, and while the children waited for us to heal, they decorated our house themselves by taping bits of paper up around the house. Rose even wrapped a few "gifts" for each family member to put under a not-yet-purchased tree. She wrapped Phil's broken watch and one of Lee's toys, and she attempted to wrap my car keys. When it came time to decorate the tree, they stuffed tangles of lights into the branches at chest-high level, and they balanced heirloom glass ornaments on the edges of the branches to be brushed off later and crash on the floor. 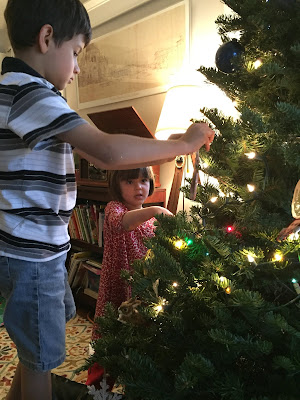 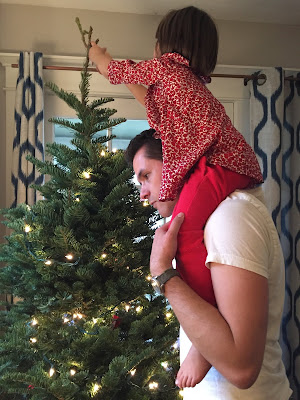 You may not be able to tell, but I really did enjoy having them participate in the decorating process, and I have long since let go of having a perfectly decorated tree. After the children went to bed, Phil and I sat sipping our instant decaf coffee and staring at the lights glinting off the shiny ornaments.

We enjoyed several Sundays watching family members participate in the singing at Granada Heights Friends Church. Jessica Taylor, Ashley Emerson, and Heather Himes all had singing parts. Even Mama Grace and Papi with their new live-in help, Elizabeth, were able to come one Sunday. 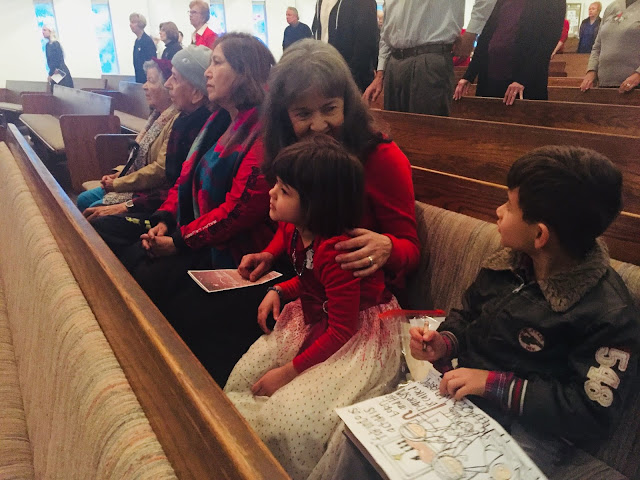 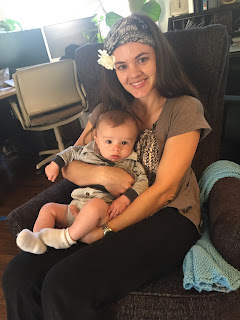 This season was busy as Christmas usually is, but it didn't seem frantic. Aside from feeding people and doing the dishes, I usually had a chance to do one or two extra things each day like laundry or give the children haircuts or have a shower myself. I made use of Walmart's grocery delivery service and simply let many things go by the wayside. They were not of utmost importance anyways. Holding Benny was.
We began our Christmas marathon at the Taylor's house December 23 after church. Phil made fudge and spoons and knives as gifts. He also gave a landscape plan to Mama Mina and Grandpa Fred for their cabin in Angeles Oaks. 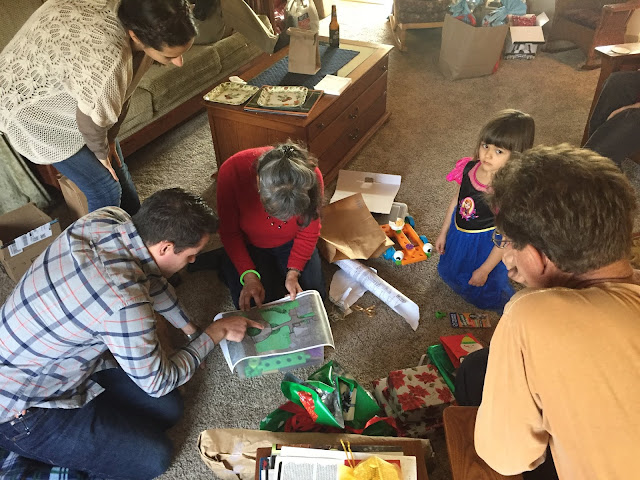 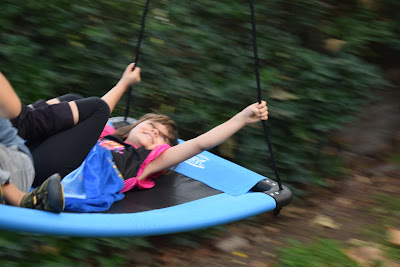 December 24 was our family Christmas. The children opened their mini-stockings on our bed and we made our traditional Cinnabon, egg, and bacon breakfast. Those little stockings make Christmas just a bit easier for me. 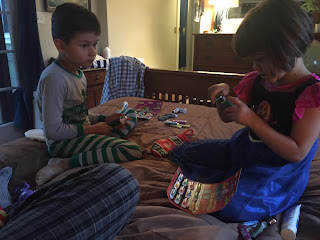 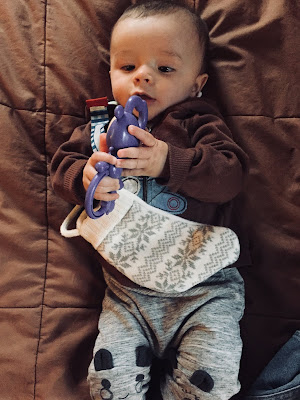 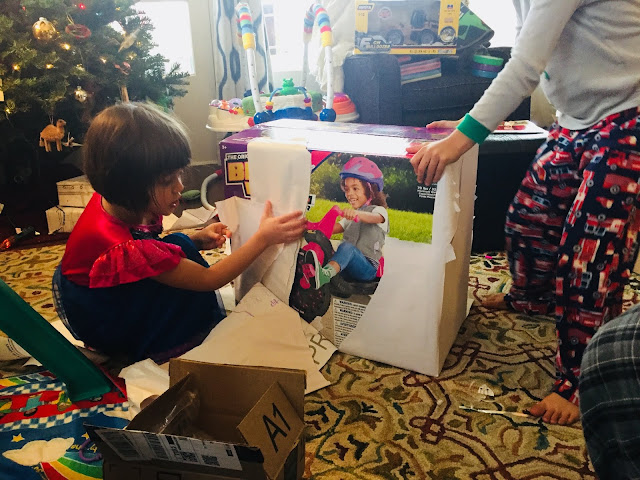 Rose's big gift this year was a big wheel. Her old pink one broke a few months ago, and she was in tears over it. It had served her well. We'd found it on the side of the road several years ago and gave it to Lee for his Christmas present before we found another more masculine one on the curb at the same house. Now she has a brand-new one with a tire-circumference that gives her an edge. Lee isn't very happy about Rose's new speed. 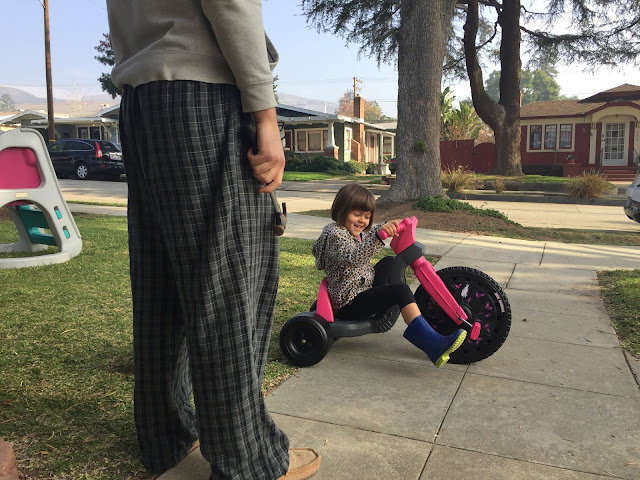 Christmas Eve was celebrated at the Coxes house with the Jensens and Barnes. Much riotous fun was had by all. The Coxes provided sandwiches and salads, and the rest provided numerous desserts. Lee and Rose were pleased to get new pajamas from Grammy and Papa. Benny got some new long sleeve onsies, which he promptly christened with poop in the days to follow.

We had a few days break from presents due to more illnesses, but the time was much appreciated. The children played with their new toys and I tried to organize our house in preparation for our last Christmas celebration at the Stevens' home on Saturday December 29th. This Christmas included the Himes, dinner, and a treasure hunt. Lee was excited to receive Hot Wheels track and Rose received a baby doll that pottys when you feed her. She has already wet the bed and couch and floors. 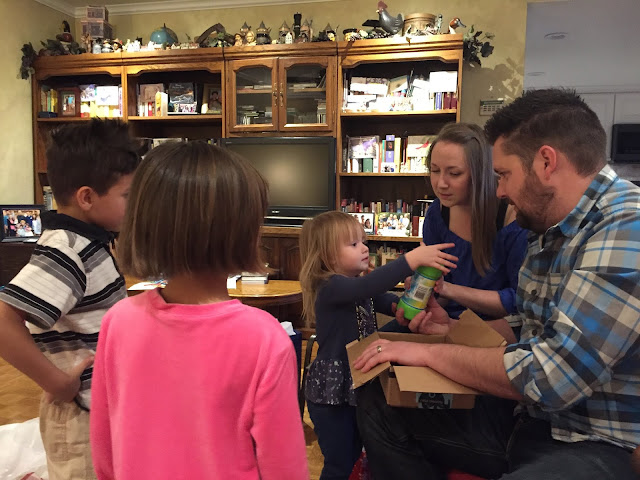 The children seemed almost more excited this year to give gifts than they were to receive gifts. Our dear Grandma Stevens took them to the Dollar Tree earlier this month where they picked out various items for Phil, me, and Benny. Their choices were quite informed and insightful. I believe they know and understand their parents well.

The ten day vacation for Phil ends today. We lounged in the park with friends and then enjoyed some Pho in La Mirada. Thanks Ian and Bonnie!