Parenting by The Book (Part 1) 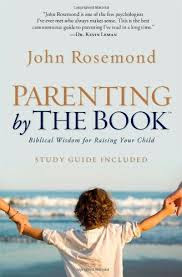 I am in the process of reading Parenting By the Book by John Rosemond, and the book makes some serious claims. I needed a place to gather the books' thought-provoking quotes, so I've dumped them all here. Everything has been taken from John Rosemond's Parenting by the Book with the page number in parenthesis at the end of each quote. FYI: I'm still trying to decide what I think about all this. I certainly don't want to throw the baby out with the bath water, but many of his claims definitely address some of my parenting problems.

"Christianity holds that we are solely and fully responsible for our sinful behavior and that only by accepting that responsibility can we receive forgiveness." (5)

"Psychology holds that a person can be "saved" through the process of therapy as mediated by another human being, that coming to grips with the corruption suffered at the hands of one's parents will set one free. Christianity holds that salvation is attained only through faith in Jesus Christ, that he is the Truth, and that only his truth can set one free." (5)

Part One: The Great Deception

Chapter One: The Walls Come Crumblin' Down

"Understanding what Grandma was talking about did not require a college degree. She did not say things like, 'In talking with you, I get the distinct impression that you are still trying to resolve childhood issues of your own, and I think we should give some time to exploring those issues and discovering how they relate to the problems you are currently having with your child.'" (19)

"Grandma talked like this: 'You know, it occurs to me that your uncle Charlie, when he was about Billy's age, did something similar to what Billy has done. Here's how I handled it . . . You've no doubt noticed that Charlie is working for the bank today, not robbing banks. Maybe you'd like to consider going home and doing with Billy what I did with Charlie.'" (19)

"The term most often used today is 'bad choices'—mistakes, in effect, as if a child's rebellious misbehavior is no more egregious than choosing the wrong answer on a television quiz show. Because malevolent motive is absent, punishment is not warranted. Besides, punishment damages self-esteem, or so the new parenting elite warns." (24)

"Grandma knew that the most powerful shaping force in a person's life was the force of the person's own free will. She understood that the choices people, including children, made were influenced by early childhood experiences, socioeconomic factors, cultural expectations, peer pressure, and so on. But Grandma also understood that when all was said and done, people were fully responsible for the choices they made." (35)

"Proverbs 22:15 tells us that 'Folly is bound up in the heart of a child.' The Hebrew word that is here translated 'folly' is used in other contexts to mean moral depravity. This means that in any given situation, a child is inclined to do the wrong thing, the self-serving WORD, to consider his own interests before anyone else's." (38)

"Authority, legitimately exercised, slowly liberates the human spirit, which is creative and loving, from the prison of human nature, which is anything but." (45)

"Humanistic psychology's second contribution to Postmodern Psychological Parenting is the idea that high self-esteem is desirable—essential in fact, to personal happiness—and parents should do everything in their power to help their children acquire it." (49)

". . . it's not the person with high self-confidence who is most likely to succeed in life; it's the person who possesses a realistic appraisal of his or her strengths and weaknesses." (59)

"Grandma understood that respect for others, not high self-esteem, defines the emotionally healthy, prosocial individual . . . As respect is given away, self-respect grows within." (73)

"America's kids were a whole lot happier before parents began listening to psychologists (and remember, I am one!) and other mental health professionals. Am I saying that my profession is the problem? Yes, I most certainly am." (67)

"In Grandma's Day, home and family were a character-education classroom in which parents were the teachers and children, students. Within this classroom, parents developed and delivered a curriculum designed to teach children a set of values essential to good citizenship. The core of this curriculum was composed of the following 'Three R's:

Chapter Four: The Tower of Parent-Babble

"Postmodern Psychological Parenting postulated that when a child misbehaves, the feelings that supposedly lie behind and drive the behavior are more significant than was the behavior itself. One of the mantras my graduate school professors drummed into me was that misbehavior on the part of a child was nothing more than a sign of underlying emotional distress, an indication that the child was struggling with an 'issue' or 'conflict' that was preventing him from behaving properly. (Note that this presumes that the child does not possess free will; he is a leaf being blown through life by psychological winds over which he as no control.)" (100-101)

"Unfortunately, all too many of today's parents are doing what I learned to do in graduate school. They engage in what I call "psychological thinking" concerning their children's misbehavior. Instead of viewing a given misbehavior as simply an error that needs to be corrected through the application of proper discipline, today's parents interpret it. 'What does it mean?' they ask, and go on to ascribe some psychological significance to it." (103)

"She (a mother) needed to act, not understand. The only thing this mother needed to understand was that by trying to understand the psychology behind her son's hitting, she was transferring responsibility from her son to herself." (104)

"Every single time—not some of the time, but every single time—parents assign some theoretical psychological cause to a child's misbehavior, several consequences become inevitable:

"They (mothers) began to believe that whether their children turned out well was completely up to them—that a positive parenting outcome was a matter of their efforts, their energy, their dedication, their devotion. There was furthermore, a new aspect to the job: to wit, doing everything possible to ensure that their children's feelings were not disturbed, and when they were, to do everything possible to set things right again." (107)

"For the first time in history, women began to feel that the terrain of child rearing was filled with psychological landmines that one untoward move on their part could set off, causing potentially irreparable damage." (108)

"Obsessive, worrisome moms began micromanaging their children, doing what micromanagers, wherever they are found, do: hovering over and racing around, checking on this and checking on that, fixing this and fixing that, making sure of this and making sure of that, helping with this and helping with that, arranging this and arranging that. Moms also began looking over the shoulder of anyone and everyone who had anything to do with their children, including their husbands making sure these people were doing the 'right' things." (108)

"When Grandma disciplines, she was trying to hurt her child's feelings; she was trying to make her child feel guilty. Grandma understood that unless emotional pain was associated with misbehavior, misbehavior would continue unchecked. But then, in Grandma's day, misbehavior was not a psychological phenomenon. It was a sin, and one could not afford to fool around where sin was concerned." (111)