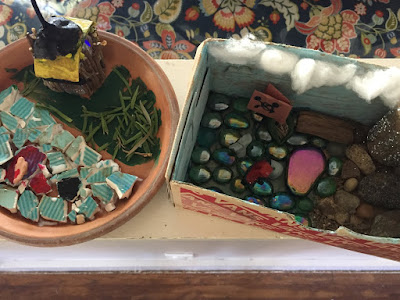 Rose came down with a fever the afternoon that Mama Mina, Lee, and Rose were see Joseph and Technicolored Dream Coat. So Rose was left behind while Lee went. There were lot of tears and bemoaning the lovely time she was missing. Nevertheless, we attempted to have a good time ourselves by making a fairy garden in a shoe box. It had a glitter-covered T.P. roll as a lighthouse and a play-dough whale in a sea of shiny blue rocks.

Two days later Grandma Stevens offered to take the kids to see the same production. It seemed only fair that Rose have a turn while Lee stayed behind this time. Her trip included an afternoon at the Stevens and an over-nighter. Obviously, when Lee discovered this, he declared that he wanted to have his own private sleep-over in the future too!

We made a fairy garden with Lee this time, hot-glueing sticks to an empty paint tub and for an ocean, we smashed up old pieces of a blue plate, which oddly-enough was one of the plates we got for our wedding and had long since been broken and used to block up the holes of terra-cotta pots. Lee had declared that he wanted to paint his hut rainbow colors, but he ended up mixing all his colors together and painting parts of his hut black. Oh yes, there was also a bloody whale in the ocean.

The next morning I attempted to clean the studio because we have new tenants moving in at the end of the month. Having done this many times while watching children, I set my sights low and decided that dusting the upstairs was a good goal for the morning. As I was gathering rags, a step ladder, Simple Green, and screwdriver, I told Lee to take a few of his own toys into the upstairs to keep him occupied. When he didn't return I went to investigate. There was a loud banging sound coming from inside, and I soon discovered the boy rapping on the spiral staircase railing with the stick end of the feather duster. He looked surprised to see me.

He pointed at the hollow railing where he'd popped the cap off and sent his lego man down the largest tubular slide ever invented for a miniature man.

"Well, it's gone now," I said, and then we spent a few seconds frantically searching for the railing's cap because he hadn't any idea where he'd put it.

After plugging up the outlets and bringing over my computer for music, I brought the boys over. Benny stuck his hand in my scaling hot tea while I opened the door. The cleaning lasted no more than thirty minutes, and included Benny unwinding a roll of toilet paper and eating some. He also unrolled the roll of paper towels and crumbled them.

Lee kept attempting to climb things, the closet drawers, the spiral staircase gate, the counters—doing anything but play with the legos he'd brought. You'd be surprised how many climbing surfaces there are in a completely empty room. At one point Benny discovered that by opening and shutting the bathroom cabinet doors, he could create a pleasing and loud banging sound, which he enjoyed until I thought that perhaps this was the adjacent tenants' day off.

I decided to work until I'd finished drinking my favorite tea, which ended up being earlier than I expected because Benny managed to get ahold of my cup again and spill it across the bathroom magazine rack and floor. Thankfully, it wasn't hot anymore. We left the studio looking rather less clean that we'd found it, but I did manage to dust all the surfaces above waist height.

There were errands to run next on our way to pick up Rose. Lee and I enjoyed browsing the aisles of Daiso and the fish market before we picked out some delicious-looking pastries at 85°, which ended up tasting less than delicious.

At the Stevens' house, Rose ran out in a new blue dress. She'd had a lovely time. She'd got a bag of new fancy dresses and a new dolly with long braided hair that she'd named Rebekah. She'd had a bag of M&M's and a new magic wand with a glittery heart.

The green monster of envy was at work in no time at all. And after Lee broke Rose's wand, albeit supposedly on accident, he was decidedly too smug and gleeful to join in our company. Only after a sit-and-think outside with Grandpa Stevens did he decide to apologize in the right spirit. Then he was determined to squeeze as much juice out of his short visit with Grandma and Grandpa Stevens by inquiring what he might have: a silver half-dollar, some action figures, a candy?

I was thoroughly disgusted with my children's greediness by the time we left, and they were no more content at receiving their gifts. In fact, they were down-right hostile to each other. I made my visions of a future involving spankings and prolonged solitary confinement quite clear to them, and they straightened up for the drive home during which Lee lost his silver half-dollar down the crack of the car seat, and I asked Rose about how she liked spending the night by herself. She said she was afraid and she'd wanted to have Lee there with her because of the monsters under the bed. Lee then declared that he wasn't afraid of anything. Rose then wanted to know if Lee's fairy garden was better than her own.

Apparently it was, because when we got home, and while Lee went tearing the car apart to find his coin, Rose barricaded herself in her closet crying because she said her fairy garden was dirty (i.e. we had used sand to create a seashore). She went to dump out the sand and tear up the rocks that she'd glued on. 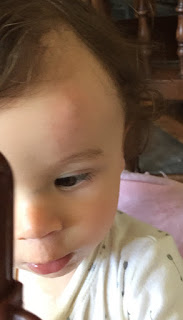 Naturally, before any of this could happen, Benny, who'd been rocking his high chair inches closer to the table, happened at this moment to encounter the corner of the table with his head. Cries drowned out a number of the bigger kids lists of blessings, but I managed to quiet Benny down by the time they turned to each other and said giggling, "Wow! Sounds like you had a nice time."

And so now it's my turn.
1) Benny had a full day to spend with just his big brother.
2) We have a new tenant lined up to move in at the end of the month.
3) There were leftovers in the fridge for lunch.
4) I enjoyed examining the live shrimp at the fish market.
5) I got to drink half a cup of my favorite tea this morning.