Comstock Chronicles: The DVD and the Squishy

By Abigail Joy Stevens November 16, 2019
Lee, my seven-year-old, has been proudly accumulating X's on his chore chart, anticipating purchasing a Mighty Machines DVD. Today was payday, and he was several dollars short of his goal. He quickly came up with a plan that involved his little sister, Rose. With his and Rose's money combined, they'd only be seven jobs short. Rose agreed to work with Lee to earn the rest.

They tidied up the living room where they'd built an indoor slide with the couch cushions and IKEA tunnel. I also asked them to scour the sink and shake out several rugs. Then I had them write letters for their Operation Christmas Child shoe boxes. We had gone to the 99 Cents store last weekend and we half-chose half-let them choose items for their boxes. 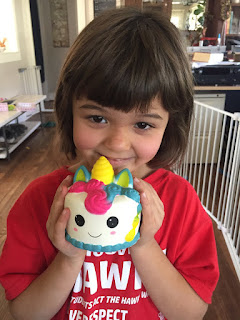 As it turned out, Rose had too many items in her box. I asked her to take out an item that we would put into my toy store instead. She took out the squishy foam unicorn in the shape of a cake.

It then dawned on Rose that she currently had enough money to buy the cake and in fact she wanted that more than the Mighty Machines DVD. She asked if she could buy it, and I explained what that would mean for Lee.

"Lee has been working this morning to buy that DVD, and you agreed to help him. He's really excited. If you buy this squishy instead of helping him buy the DVD, he will have to do eight more jobs all on his own. He will be awfully disappointed."

"I want my squishy," Rose insisted. So I allowed her to hand over the money. Lee began to cry.

It all seemed terribly wrong, especially as Rose smiled and snipped open the package. I asked her to go enjoy her toy somewhere else because this was unkind of her to do to Lee. I held Lee telling him how disappointed he must feel and how awful it was to be so close to getting his DVD and then not be able to buy it.

I began to think through the situation. Rose had intended to use her money for Lee's DVD, but then she'd changed her mind, and we'd allowed it. The more I thought about it, the more I realized that I was failing to teach Rose how to be true to her word. By the time I'd decided that I really needed to hold Rose to her word, Lee's tears had moved Rose to stuffing her squishy cake back into the bag and giving up her money for the DVD instead.

We were all relieved. Lee dried his tears, and we praised Rose for her sacrifice. As the children emptied their banks to buy the DVD, I realized in the accounting that Rose had some extra change, and was just two jobs shy of being able to buy her cake in addition to the DVD.

I suggested that Lee help her with these last two jobs, but that didn't appeal to him. He much preferred to watch his DVD immediately while Rose continued to work.

Again, even though I was against this inequity, I set up the DVD for Lee and gave Rose another job. I asked her to vacuum, hoping the noise would drown out the DVD and inadvertently spoil Lee's viewing experience. She fell apart into tears frustrated at the bulkiness of the vacuum, so I helped her. Meanwhile, Lee's DVD failed to play and I refused to help him seeing as I was already helping Rose. By the time Rose was done, her tears had moved Lee to compassion. He'd found an extra quarter somewhere and offered this to her. 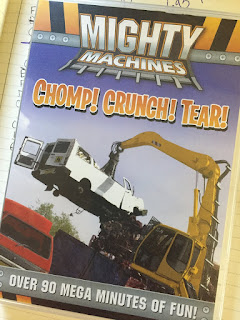 With the vacuuming done, Rose finally got her cake and I got the DVD to work properly. As they watched crushers smash cars and huge cranes lay pipe, Lee kept looking over at Rose to be sure she was enjoying the DVD as much as he was.

They'd both gotten what they'd wanted, but gosh, what a lot of tears we'd had to go through. Perhaps it was best for them to learn compassion and sacrifice in this way. But don't praise me for allowing it to happen. My lack of involvement is usually a result of my being too stunned, confused, and/or angry to do anything.

I do think there is something in this for me too besides a lesson in holding them when they hurt. What if the road to get what we want is strewn with these tough situations? What if my hope of having a homework-free first-grade experience for Lee is a road of tears and disappointments, conviction and compassion. I use this as an example because it is the object of my desiring these days. Is anything really a clean and smooth transaction in the Kingdom of Heaven? Do I ever just hand over the money and get what I want when the Lord is working on my heart?

It seems like He says, "Yes, I would gladly give you that, but I will see that your heart is right first."

And if I am willing to shed tears and be moved by the tears of others, He will not only give me the desires of my heart, but make my heart more like His own.