Comstock Chronicles: Living in Another World

By Abigail Joy Stevens March 31, 2020
It feels like I'm living in another world, perhaps even another time period. Michael's crafts store down at the quad is boarded up. Ross has signs on the windows saying they're temporarily closed. The parking lot down at the quad is mostly empty except for Vallarta market and Rite Aid. The very air outside seems more still and, well . . . restful, I suppose.

People in Uptown Whittier seem different too. We're more friendly and open to chat with each other, sharing news and fears while keeping our distances, of course. I've seen so many couples, parents with children, and entire families walking around our neighborhood. People wave and pause in front yards to exchange greetings. There's more time, it seems, to take an interest in each other. We're not rushing off trying to keep to a schedule.

I suppose people are less involved in their own business. They're more interested in others. How are you doing? Have you run out of supplies? Can I offer you some of my oranges? How are your children?

I've seen several sidewalks decorated with chalk bible verses, and someone in Uptown Whittier has instigated a bear hunt for the children. Residents have placed stuffed bears in their windows and the children find them on their walks. My neighbor has put a stuffed Garfield on his porch. 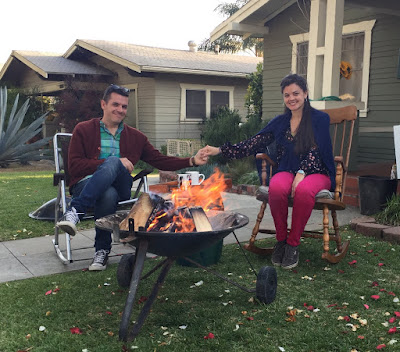 Today, Phil and I started to date one another again. We've decided that we needed some time just to ourselves, so Grace and Eric Nimmo (our studio neighbors), watched the kids while we picked up Fideo soup and sat in our front yard around our fire pit. I was giddy with excitement. How romantic! How intimate! How special! We plan to continue this each day for a half and hour or so. The kids will watch Clifford and Benny will hang out in a pack-n-play so Phil and I can finish our sentences with each other.

Going out for groceries was special too. I was rather exciting to see another part of Whittier. I was interested in everyone and everything. Would anyone be getting their oil changed? Who was taking care of the animals at Petco? Which restaurants would have "We Deliver" signs in their windows? I wondered where that old lady in that car was going? What are the homeless people doing right now?

Vallarta has hired a larger security guard. The older sullen-looking fellow has been replaced by what I can only describe as a Hun. I'm pretty sure if I spoke to him, he would speak in grunts, but I know this can't be the case because I saw an older lady speaking to him when I exited.

One exit is closed so that everyone must funnel through one entrance. The self-serve bins are empty and so were the bean, pasta, and rice sections. There was a 6-pounds-of-meat and one milk and egg carton limit last week, but the meat restrictions have been lifted. I observed four or five butchers behind the meat counter in their white uniforms, pushing raw meat through the machines. A waft of cold air blew over the counter my direction. It's cold back there. Suddenly, being a butcher is an integral job. I made sure to thank him after I got my packages of meat.

Down the canned goods aisle, a shelf-stocker struck up a conversation. He told me about the line out front that morning, and how half-an-hour after opening, the newly stocked toilet paper shelves were bare. "We get a shipment in every day and every morning it's gone," he said. "Someone put our store online as the place that has everything, so people come from all around to get it. And then when the regular shoppers get here, it's all gone." He told me about his 14-16 hour shifts and how he just wants to get out and go somewhere, but there's no where to go. "I have to keep doing my job," he said, "but I'm not even married! I don't want to die!"

I'm sure at that point Grandpa Seelye would've shared the Gentle Touch, but seeing as I'm usually tongue-tied in these situations, we simply wished one another well and went on with our jobs. The overhead speaker then asked everyone to wipe down their stations.

I can relate to the shelf-stocker. I'd rather not go through the process of dying. Sounds uncomfortable, especially now as I'm getting used to this strange new way of living. 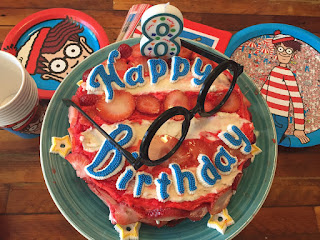 After two weeks of ups and downs, awkward transitions, and unexpected change, I finally feel accepting of what needs to be done now. We've attempted too much school and then given up on school. Simeon (our roomer) was off work then went back to work and now is off work again. I met with friends and then I wrestled with feeling guilty about meeting with friends. I took on the bulk of the domestic responsibilities for a number of days while Philip rested up from being sick. We've had our church, get-togethers, and excursions completely wiped off our schedules. I attempted to make an 8-year-old extrovert happy on his birthday while at the same time catering all our activities to unclear mandates and Lee having one swollen foot due to a bee sting. I relearned how to meal plan and cook while watching three kids. Lee and Rose, the 8 and 6-year-old, are having to adjust to my being their primary authority while Benny, the 20-month-old is getting used to having to share me all the time. It's been a huge time of change.

Every night before we go to bed we share our day's rose (a happy part), thorn (a sad part), and bud (what we're looking forward to). And the last few days the children have looked at me and asked, "What is happening tomorrow?" or "I have no bud." But they don't say it despondently anymore like I used to think it—"Oh gosh! I have nothing to look forward to. I'm stuck here in this house with these kids, slaving all the time with no moment to think or do what I want" They say it as if it were simply a fact.

Grandma Seelye said…
Love hearing about what you are doing and learning! thanks for sharing!
March 31, 2020 at 5:31 PM