The Enneagram: A Christian Perspective (Part 1) 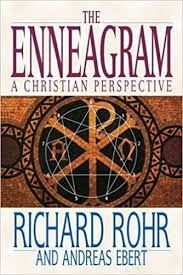 This here is the dumping ground for marvelous quotes from Richard Rohr and Andreas Ebert's The Enneagram: A Christian Perspective. If I had to rate Enneagram books, this one would be my second choice only surpassed by Marilyn Vancil's Self to Lose - Self to Find book, which is shorter, easier to read, and more accessible. I also think that Rohr and Ebert don't seem to explain how to trust the Lord with our deficit quite as well as Vancil.

This book really encapsulates what I tried to teach my mom's group last month about the Enneagram: transformation through a relationship with Christ. Wish I had read this one before I spoke, but as my husband said, we've arrived at the same peak only to find other people are there too.

"The incarcerated know that the separate self has not served them well" (Rohr & Ebert, xv). Makes sense why Jesus ministered to the prostitutes and tax collectors, and why He said "Blessed are the poor in spirit . . ." The poor in spirit seem to know they aren't good. The rich and well-mannered seem to have a harder time realizing how much they need Jesus because their own systems for right living are supporting them quite well.

"The great tragedy of our age is the fact, if one may dare to say it, that there are so many godless Christians—Christians, that is, whose religion is a matter of pure conformism and expediency. Their 'faith' is little more than a permanent evasion of reality—a compromise with life. In order to avoid admitting the uncomfortable truth that they no longer have any real need for God or any vital faith in Him, they conform to the outward conduct of others like themselves. And these 'believers cling together, offering one another an apparent justification for lives that are essentially the same as the lives of their materialistic neighbors whose horizons are purely those of the world and its transient values." (Merton as quoted in Rohr & Ebert, xvi) Ouch!

"Only those who love rightly see rightly! Only those who are situated correctly in the correct universe can read the situation with freedom and grandeur. Text plus full context equals genius. Only the true believer can trust that larger context, even to the point of including God. Then the believer is at a cosmic level of peacefulness: reality is good, the world is coherent, it is all going somewhere. That allows the believer to move ahead without a rejecting or superior attitude. Such people are constantly learning and always teachable and will likely do good things." (Rohr & Ebert, xix) So beautifully said!

"The Enneagram gets right to the point and calls it our sin." (Rohr & Ebert, xix)

"If we will not balance knowing with a kind of open ended not knowing—nothing new seems to happen. Thus it is called 'faith' and demands living with a certain degree of anxiety and holding a very real amount of tension" (Rohr & Ebert, xx). So wonderful to hear this rather frightening-faith-life described as such. It can sometimes be scary to obey and trust in God.

"The practice of prayer we can choose to do ourselves; the suffering is done to us. But we have to be ready to learn from it when it happens and not waste time looking for someone to blame for our unnecessary suffering" (Rohr & Ebert, xx). Gosh, I've wasted a lot of time!

"You'll get the feeling that you have loused up and ruined many relationships, once you realize how many people you have used exclusively to build up and maintain your own self-image (the ones who didn't play along we generally banned from our circle of friends) . . . When we keep the enemy outside the door, when we don't allow the not-I to enter our world, we'll never be able to look our sin or our dark side in the face. Men and women who get on my nerves, who threaten me and cause me anxiety, need not become my bosom friends, but they have an important message for me." (Rohr & Ebert, 27-28)

"Each of us has put together a construct by which we explain why what we do is necessary and good." (Rohr & Ebert, 28)

"That is why we can't simply 'give it up': it (the construct by which we explain what we do) belongs to the specific way that we give our life a goal and a direction. It belongs to the survival strategy that we adopted as children." (Rohr & Ebert, 29)

"Sometimes one meets people who are free from themselves. They express what moves them—and then they can, so to speak, take a step backward. They play an active part in things, but you notice that they don't think they've got a corner on the truth market." (Rohr & Ebert, 30)

" . . . it (our pitfalls) determines us at least every ten minutes. It's like an addiction. Perhaps that is why it is called 'passion'" (Rohr & Ebert, 31). I can definitely attest to the truth of this. When I am not trusting the Lord and letting Him handle the complications of my life, I resort to detaching myself from life (I'm an Enneagram 5) more like ever 2-3 minutes.

"Don't 'go after' your sin directly or you will only confirm your stance and your willfulness! You will attack your ONE in a ONE way. You will 'understand' your FIVE as another FIVE trip. You will try to 'succeed' at being a redeemed THREE. The key is to recognize, name, and let go" (Rohr & Ebert, 32). The key is to repent and give yourself into God's merciful hands, but Rohr and Ebert talk about this later in the book.