Comstock Chronicles: Someone Else Made Easter Happen

By Abigail Joy Stevens April 12, 2020
I enjoy watching the people go by wearing their different masks: bandanas and surgical masks and painters masks and pretty masks with flowery prints someone sewed. I saw a mask with a clear window for the deaf or hard-of-hearing. I liked that one. You could see a person's smile through it. As it is, all I can see is people's eyes squinting.

I also enjoy walking past the houses these days. They feel alive and happy with activity. I wonder what the people inside are doing. I used to pass the homes and feel their emptiness and abandonment since most of them seemed unoccupied during the day. They felt like hotels where the people only came home at night to sleep and watch T.V.


With an increased work load, I had made absolutely no Easter plans aside from having the children stuff last year's twelve plastic eggs with last year's Halloween candy. They were quite content to do that, especially as I told them they could stuff as much candy as they could fit into each egg.

Then, all on their own, the children decided to prepare for Easter themselves. They made their own Easter decorations—pictures of empty tombs and three crosses on a hill, a rather gruesome crucifixion scene and the triumphal entry. They stuck these up around their room with masking tape.

Then Grandma Stevens put together Easter baskets with odds and ends from her student's prizes. Phil drew pictures for a scavenger hunt so the children could follow them to find their Easter baskets. I also received three care packages with Easter goodies to hide for the children. And Mama Mina brought over legos and peeps. 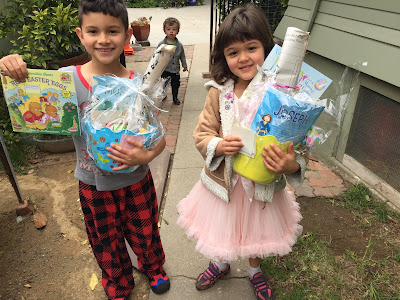 Earlier in the week, Grandma Stevens went through the Resurrection eggs on Zoom with the kids, and later they came to me with their own versions. Rose hid various objects in an empty wipes box filled with snipped paper, and Lee hid his objects in his old pencil box filled with legos. A crayon represented the cross. A pin represented Jesus being pierced. A Disney book of Rapunzel . . . I never learned what that one represented.


Last Thursday, Lee happened to be listening to the crucifixion and resurrection story on our Bible in Drama cassettes. I cuddled with him until I realized what we were listening to, and then I experienced his physical glee at the events as they unfolded. How marvelous to see the story anew with him! I also happened to be at the story of the crucifixion and resurrection in Eugene Peterson's book of sermons, When Kingfisher's Catch Fire.

It's as if my efforts weren't needed to make Easter a celebration. I guess the best plans are probably always the ones God makes instead of me.