Did Jesus Have a Personality? 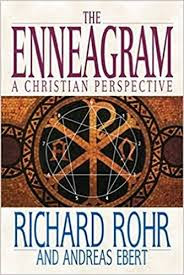 I'm finally finishing up The Enneagram: A Christian Perspective by Richard Rohr and Andreas Ebert. Earlier this year, I posted a list of great quotes from the first part of their book. The middle part of their book explains each type. The last part talks about out callings, root sins, arrows, subtypes, wings, and other technical bits.

They also have a section showing how Jesus embodied each of the Enneagram types without falling prey to their sins. I thought I'd share some of the quotes from that section as I found them particularly inspiring.

"For ONEs, a key paradox of the Gospel is that we become perfect by accepting our own imperfection. We must recognize that it is part of the process of growth, that we make many mistakes." (Rohr & Ebert, 234)

"Jesus did not suppress his anger or hide it behind a friendly façade." (Rohr & Ebert, 234)

"Jesus' parables about growth (Mark 4) are an invitation to all perfectionists not to be always in a state of panic, but rather to trust in the evolution of God's reign. Patience turns angry do-gooders into effective reformers." (Rohr & Ebert, 235)

"The invitation of the TWO is the call to freedom. It is the freedom to commit oneself and to liberate others, the freedom to help and to let oneself be helped, the freedom to be alone and to be in the company of others. TWOs find in Jesus the model of a person who loves without losing freedom, and without abusing the freedom of others." (Rohr & Ebert, 236)

"And yet Jesus knew that the victory he sought to achieve was a victory won consistently through the paradox of defeat. He chose a path that appeared to be a failure. He was able to do this only because his hope in his Father, who can create life from death, was greater than his fear of loss and failure." ((Rohr & Ebert, 237)

"—everything that Jesus sees inspires him to create images and parables, which catch onto simple and incidental things in order to illustrate universally valid divine mysteries and truths. Everything can become part of God's code." ((Rohr & Ebert, 238)

"Jesus was able to distance himself like a FIVE, to withdraw, to claim undisturbed space for himself and reject the exaggerated demands for attention from his family and those around him." (Rohr & Ebert, 239)

"This retreat was not an end in itself. It served to prepare beforehand, and assess afterward, his active service of men and women." (Rohr & Ebert, 240)

"He (Jesus) had the freedom to obey laws, rules, and traditions, as long as they weren't taken to be 'the real thing.' . . . However he could also contravene any norm or rule when it didn't serve human beings, but was misused by religious leaders to oppress people." (Rohr & Ebert, 240)

"The enjoyment of life's pleasures that Jesus and his disciples exhibited were so conspicuous that he was accused of being a 'glutton and a drunkard' (Matt. 11:19) . . . But Jesus also warns against a false and superficial joy. . . the joy that Jesus promises goes through the eye of the needle of divestment and of brotherly-sisterly sharing." (Rohr & Ebert, 242)

"The Greek Orthodox theologian Kallistos Ware aptly says that 'Jesus does not show a path around life, but rather all the way through life, which means not substitution for our suffering but saving companionship.'" (Rohr & Ebert, 243)

"He (Jesus) does demand that his listeners turn the left cheek if someone strikes them on the right; go a second mile, if they are forced to drag his luggage one mile; give both cloak and coat to someone suing them for just the coat . . . Through such surprising behavior, the 'victim' prevents the perpetrator from laying down the rules, wins back his or her own dignity, and offers the perpetrator the chance to change voluntarily without losing face." (Rohr & Ebert, 244)

"For Jesus peace was anything but idleness. Love activated him. He was decisive and conscious of his goal. Jesus was passive only insofar as he always passed on what he had already received from his father. But this 'passivity' should rather be called 'permeability.'" (Rohr & Ebert, 245-46)