An Explanation of Authority 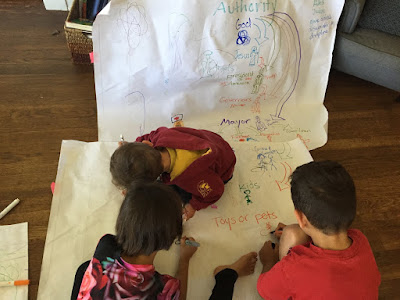 This is how I explained authority to my children the other day. We were a little confused and needed clarification.

Beneath God is Jesus who also had a huge role in creation and who also has authority both in heaven and earth (Mt 28:28). Beneath Jesus is the angels, which I happen to think includes the devil and demons.

Next in the hierarchy of power comes the kings, presidents, tzars, dictators or what-have-you. Beneath them, at least in the USA, we have state governors and then city mayors. Somewhere in there we also have the military, police, firemen, teachers, superintendents, judges, bosses, etc. At the bottom is parents over children and children over pets and toys.

My children enjoyed illustrating positions of authority on a large poster. They were not so pleased to find themselves so low on the totem pole. Neither was I for that matter.

So here are the rules of authority as I understand them. (This part I didn't explain in so many words to the children.)

RULE 1:
Earthly and heavenly authorities are different. Earthly authorities govern how we ought to behave in society. Heavenly authorities govern both how we act and how we think, feel, and make choices. Earthly ones make laws about paying taxes, respecting personal property, and not shouting "Fire!" in a crowded theater. Heavenly ones, and by this I mean God, make laws about about we ought to feel towards each other and God: not coveting our neighbor's stuff, respecting our parents, worshiping God alone, and loving our neighbor as ourselves.

Tricky Situation #1: When we confuse earthly authority for heavenly authority such as if a parent or boss or pastor tells us we did something wrong, and we believe they're judging our value as a good human being. No one but God has the authority to judge if our intentions, hearts, thoughts, or choices measure up to God's standard of goodness. If we are always seeking this validation from people, we'll be constantly squashed or puffed up by what others say of us. This is a big issue with Enneagram numbers 1, 2, 3, and 4. In the case of the Enneagram 1, they are prone to confusing their own judgement with heaven's.

RULE 2:
Earthly authorities can punish law breakers. However, they aren't supposed to judge or punish our feelings, thoughts, or volition. Nor can they judge our behavior beyond what the society's laws require. Yes, a judge sometimes has to determine a person's intentions, but only insomuch as it relates to breaking a law. God alone judges our hearts and decides whether we are living according to his heavenly laws. And guess what. We aren't.

RULE 3:
People in authority are responsible for making laws to help society work well. When authorities do not seek what is best for their people, they're answerable to a higher authority, sometimes a governor or president but always to God himself who puts people into power and takes them down. Hence the overthrowing of empires, assassinations of dictators, and ends of regimes.

RULE 4:
Some authorities are over us for relatively-short periods of time. When I was a child my parents had a rule that I couldn't eat after 3pm. Now I may eat whenever I wish. If I go to Biola, I'll have to submit to obeying their rule about not drinking while enrolled. When I visit some friends' homes, I must take off my shoes. Disrespect or disobedience to these rules results in some sort of consequence: spanking, expulsion, loss of friendship, or thirty lashes.

RULE 5:
When it comes to people on the same level of authority, say state governors to one another or co-workers to each other, both have a right to tell one another their own rules regarding what is under their authority. This is my desk; please don't drop banana peels on it. This is my state; we don't want marijuana imported from your state. This is my PTSD; please don't play bomb noises on your computer. In that regards, we all have the responsibility to submit one to another in love. (Eph 5:21)

Tricky Situation # 3: When one thing is under two people's authority. "I'm closing your beaches!" "We are not going to be a tardy family!" "You shouldn't let your children talk to you like that!"

Tricky Situation #4: When people in authority try to exercise power over those beneath them in areas outside their domain, such as communist countries outlawing alternative viewpoints, or bosses micromanaging their employees, or parents demanding a child feel or think a certain way or robbing a child of their age appropriate choices.

RULE 7:
We have a right to disobey authorities above us when a higher authority asks us to. If the government tells us we must teach our children that homosexuality is right, and we feel that obedience to this rule would be disobeying God, we can disobey the government without fault of our own. If the commander-in-chief tells the military to take over a town's supermarkets to stop rioting, the military can temporarily disregard the city's laws. If the dean of a department excuses a student from a particular assignment due to sickness, the student needn't complete that teacher's assignment. And here's where it gets really interesting, if Christ lives in someone, he or she may tell a demon where to get off because Christ has given him or her authority over even the demons.

Tricky situation #5: When someone believes they're acting on God's authority to bomb abortion clinics or condemn others or steal from the rich and give to the poor. This is a type of confusion often had by the Enneagram types 8 and 1 who are confused about their use of power and authority in the world and within themselves.

I think the best example of being responsible to and with authority was Jesus. But that is a subject for another blog post.

RULE 8:
No one governs rightly except God and Jesus. Every leader makes mistakes and no one knows what is best for the masses. This means (regardless of what Enneagram 1's think) that we aren't even able to govern our own thoughts, feelings, and choices rightly. And, in fact, until we surrender ourselves to the Lord, we are under the authority of the world's trends, the chemicals in our body, and the devil himself.

That is the most tragic misuse of authority of all times. If we cannot rule ourselves, how can we ever expect to rule others?