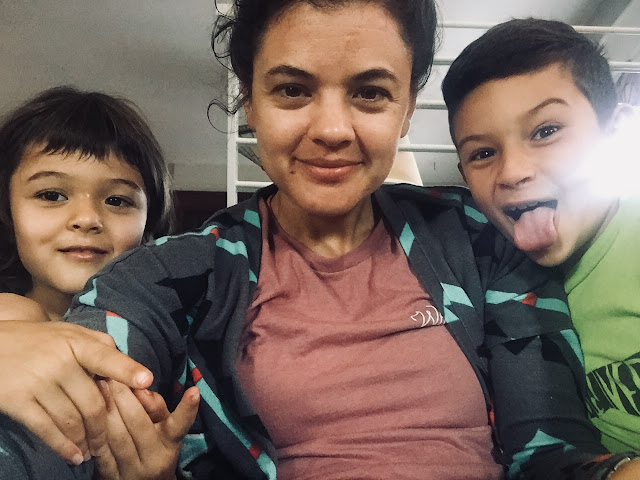 There has been so much talk about COVID-19 and masks and quarantine that I am whole-heartily sick of it. The figs on our tree are ripening two a day and we can't seem to keep up with them and that seems to me far more interesting. We've sliced them thin and had them on toast. We've made jelly out of them. We've had them with goat's cheese and in yogurt. The birds are enjoying them now, but I don't mind so much. I much prefer the birds to the green buzzing Japanese beetles who don't seem able to steer their own bodies very well.

This week we began home schooling. Simeon, our roomer, watched Benny by following him around the house and giving him his heart's desires while I began the Sonlight curriculum with the children. Despite their moaning and dragging feet, the experience has been overall positive. They interrupted my reading of Usborne's People of the World just about every other sentence to ask questions or add their own information. Some of it related to our material; some of it caused me to wonder if they were listening at all.

They were very excited to begin Charlotte's Web with Philip who gallantly volunteered to read it to them in E.B. White's voice before bedtime. There's also writing and reading and math, which the children are pretty sure I'm not qualified to teach to them. I was a math tutor and teacher for over ten years and my degree is in English writing. Still the children insist that I'm not doing it the right way or that I have no right to tell them what to do. I have no intentions of killing myself over my children's education, but something will certainly have to be done about their attitudes regarding my corrections. 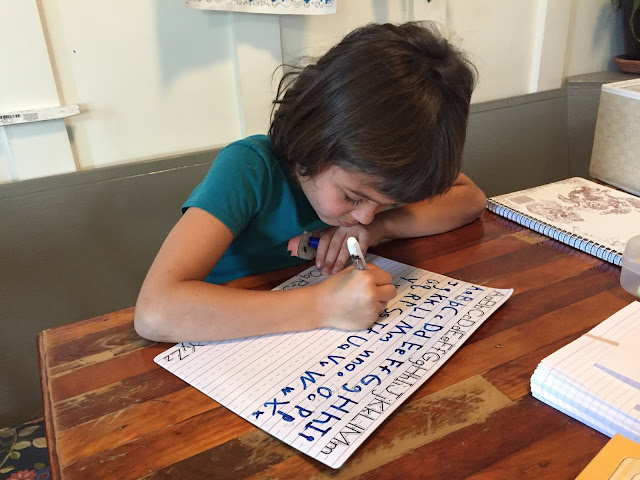 I'm encouraged that more structured mornings have resulted in better attitudes all around. They do their chores more readily and seem to savor their play time enough to fight with each other less. It's really a most curious cause and effect. The more jobs and work I give them, the better they behave. The more leeway and treats and T.V. and choices I allow them, the worse they get.

Just the other day I walked in on Lee who had propped my foam roller up between some cushions and was saying, "Fire against the Germans!" Rose, who was in the line of fire, had an armrest sleeve on her head and said she was King Herod's wife. I'm unclear as to how these two games coincided with one another, but somehow they did.

They have also designed a "water feature" in the backyard, been found quietly playing War with a deck of cards in their bedroom, and made a series of Christmas ornaments out of old greeting cards. Rose hung torn apart Hawaiian leis around our citrus trees and invited us all to a Trader Joe's Dunker's dessert this evening, which she'd prepared on a tray with water.

In other news, I went to the local bike shop, Whittier Cyclery, to have new tubes put in the children's tires. I went Benny in his stroller and children in their masks. As the shop worked on our tires, we inspected the two to three hundred bikes crammed into the center of the shop. I began to notice that this wasn't the usual mix of shiny new bikes for sale. Some were rusted. One was an exercise bike with no seat. One had tires that looked like they dated back to the 70's. I'm sure some of these were dug out of someone's grandma's garage. They all had tags on them with a list of things that were wrong.

I asked the man about the tags when I went to pick up my repaired tires. "Oh, these aren't for sale," he said. "We don't have any bikes for sale. We're all sold out and we can't seem to get any more. These are all bikes people have brought in for us to repair."

I marveled at how much work he had to do. "Months worth," he said. I thought it a rather interesting sign of the times.

I found another interesting sign of the times at La Mirada Regional Park one evening. The racketball courts were full of players, and groups of people were on the grass with their exercise equipment doing their cross-fit workouts. There was even a baseball team practicing next to a baseball field. They couldn't practice on the field itself because the city (or county?) placed large plastic barriers at key places where players would run but that wasn't stopping these players from practicing.