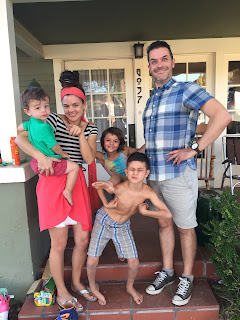 If after a day of stopping my intended activity to settle arguments, a day of spraying on mosquito spray and rubbing on cortisone, a day of planned activities that didn't go as planned, a day of being treated like I'm unreasonable, ridiculous, despicable, unfair, yes, even a tyrant! A day of picking up letter magnets and scraps of paper and couch cushions and books and play-kitchen fries and string tied around door knobs and scotch tape that comes apart in shreds and socks balled up and tossed behind the furniture rather than be taken to the dirty clothes,

I'm thinking a tray of cookies sounds nice . . . and a chaise lounge. A movie, a back rub, a cup of tea and some silence.

It is nearly impossible NOT to feel entitled to some luxury after working so hard. That's how life works. Right? Those who work hard earn something? The harder I work, the more I earn? And I have worked very hard.

Perhaps the expectation of payment is what drove me to work in the first place. Perhaps I was "hoping all the time that when all the demands have been met, [I] will still have some chance, and some time, to get on with [my] own life and do what [I] like. In fact, we are very like an honest man paying his taxes. He pays them all right, but he does hope that there will be enough left over for him to live on." (Lewis, 195-6)

"As long as we are thinking that way, one or other of two results is likely to follow. Either we give up trying to be good, or else we become very unhappy indeed. For, make no mistake: if you are really going to try to meet all the demands made on the natural self, it will not have enough left over to live on. The more you obey your conscience, the more your conscience will demand of you. And your natural self, which is thus being starved and hampered and worried at every turn, will get angrier and angrier. In the end, you will either give up trying to be good, or else become one of those people who, as they say, 'live for others' but always in a discontented, grumbling way—always wondering why others do not notice it more and always making a martyr of yourself. And once you have become that you will be a far greater pest to anyone who has to live with you than you would have been if you had remained frankly selfish." (Lewis, 196)

I meant to insert a small Lewis quote, but I couldn't leave the rest out.

And what is wrong with that? We pay a dollar, we expect to get the candy bar.

Alas, this is how the world sees people: in transactional relationships, an eye for an eye, a tooth for a tooth. I scratch your back; you scratch mine.

But that is not God's way. God asks us to love unselfishly, unconditionally, without requiring reciprocation. And that can only be done when we give up our attempts to work and our desires to be rewarded for our work.

"The terrible thing, the almost impossible thing, is to hand over your whole self—all your wishes and precautions—to Christ. But it is far easier than what we are all trying to do instead. For what we are trying to do is to remain what we call 'ourselves', to keep personal happiness as our great aim in life, and yet at the same time to be 'good'. We are all trying to let our mind and heart go their own way—centered on money or pleasure or ambition—and hoping, in spite of this, to behave honestly and chastely and humbly." (Lewis, 197-8)

"That is why the real problem of the Christian life comes where people do not usually look for it. It comes the very moment you wake up each morning. All your wishes and hopes of the day rush at you like wild animals. And the first job each morning consists simply in shoving them all back; in listening to that other voice, taking that other point of view, letting that other larger, stronger, quiet life come flowing in. And so on, all day. Standing back from all your natural fussings and frettings; coming in out of the wind."(Lewis, 198)

"This is the whole of Christianity. There is nothing else." (Lewis 199)