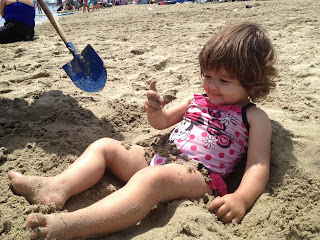 I remember learning about nursing. I'd just had my first baby, and things were way harder than I thought they should be.

I was not ready for this commitment. In fact, I was sure the lactation people had it wrong, so I lengthened the breaks between feedings until I gave myself an infection, twice. I wasn't ready for what it would take, and only later did I learn that nursing would be harder for me than most women.

I had the same sort of thinking about sleep deprivation. With my first baby I was mad at anyone who complained that they hadn't slept well. Had they any idea how little I had slept!? By baby three I'd stopped being offended by a friend's occasional poor night's rest, and I'd stop expecting my nights to be uninterrupted. I knew what having a baby was like, and I knew that getting up in the middle of the night was normal.

I could name a myriad of other child-related things that I thought were harder than they should be, like going to the beach. There was the packing, the slathering sunscreen on screaming toddlers, the crying and pouting just to get everyone in the car. Then at the beach there was the chasing, the constant watching and correcting, the messy task of getting them clean enough to buckle them back into their car seats, the drive home where they were crabby until I put them down for naps. While they slept, I unpacked and swept up sand.

I remember thinking, "Well, that was way too much work. I'm not doing that again."

Now with three kids, I'm not angry at the sand in my car and I plan for the prep and clean-up. It's normal. It's just part of taking children to the beach. I've also gotten more efficient with beach trips. The kids carry their own bags. I bring baby powder to remove sand. We pick up lunch in a drive thru on the way home. When we get home wee keep sandy gear outside the house.

All this to say, I wonder if this is true about most things in life. We think it's going to be easy. It ends up being more work than we expected. We moan and groan. We quit or refuse to do that again or become resentful whenever we have to do it.

It seems to apply to lots of things. Don't you think? Redoing the bathroom, completing a degree, having family gatherings, hosting a party, being in a church community, remaining friends with certain people, making peace with one's childhood, staying married . . .

What if most of our difficulties are just the normal growing pains of trying something new, something we're not naturally good at, something that's not the way we thought it would be because we didn't create this world or outline its rules.

What if all the discomforts of doing something difficult is like finding sand everywhere after the trip to the beach? We had no idea sand would get there. We had no idea it would be so much work. In fact, if it's going to be this much work, we'd rather not do it.

But sand after the beach is normal and so are troubles.

I'm not sure this makes the troubles any easier, but at least we know they're part of living. We also know that for the one who has Christ, there is nothing that can defeat us.

"I have said these things to you, that in my you may have peace. In the world you will have tribulation. But take heart; I have overcome the world." John 16:33