Book Review: The Gifts of the Jews

By Abigail Joy Stevens November 11, 2020
I found The Gifts of the Jews by Thomas Cahill wildly interesting. I would like to read it again someday. But I don't recommend it unless you're naturally critical. Some of what Cahill says is marvelous, some is confusing, and some is doubtful. I'm not sure I understood it all, but here's my best attempt at an assessment. 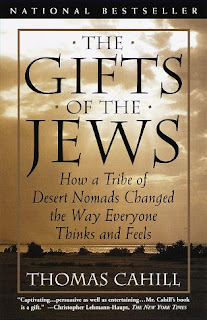 Cahill argues that the Jews altered how everyone thinks and feels. They are the originators of many of the western beliefs that we have, such as: people have an inherit value as individuals and not just pawns to be used; history is going somewhere, it is not an endlessly repeating cycle; people have an inward life and an outward life, and both matter when it comes to acting rightly; there is a definitely way that people are to behave and it has nothing to do with how much money one has or how powerful one is.

He is very complimentary about how the Jews were really unlike any other people group. He also does a fantastic job of describing the world pre-Abraham. This shed a lot of light on the culture that Abraham was called out of and why God's interactions with Abraham meant so much. This was by far the most beautiful and insightful part of the book. He really builds many beautiful pictures of Abraham, Moses, the prophets, and others.

He seems to have very little belief in biblical miracles as they are presented in the Bible. He states that the Israelites crossing of the Red/Reed Sea was probably just the tides going in and out. He passes this off as the most probable but doesn't explain why. To me he seems to be operating on the assumption that the words in the Bible couldn't possibly mean exactly what they say.

He also seems to make a lot of assumptions about who put what in the Bible. He says that the Bible we have today was largely influenced by the "agendas of priests and monarchs" who probably inserted much into the scripture for their own purposes (Cahill, 208). He also says that it was the post-Davidic kingdom's longing for the way things used to be that "transformed into an ever more detailed belief that one day God will send another messiah" (Cahill 209). He does emphasis the prophets preaching on social justice, exploiting the poor, religious hypocrisy, and sacrifice of their children. And says so very well, "God wanted something other than blood and smoke, buildings and citadels. He wanted justice, mercy, humility. He wanted what was invisible. He wanted their hearts—not the outside, but the inside." (226)

He also has some interesting—not necessarily heretical but definitely different—ideas about the patriarchs. Abraham, Jacob and David are all portrayed as totally human, which is a bit of a shock if you've tended to venerate these people. This is probably a good shock to experience for us all.

However it's quotes like the following that seem to make we wonder what this author is really up to. Can we really pick and choose from scripture what was true and what wasn't?

"It is no longer possible to believe that every word of the Bible was inspired by God. Fundamentalists still do, but they can keep up such self-delusion only by scrupulously avoiding all forms of scientific inquiry. They must also maintain a tight rein on their own senses, for, even without access to modern biblical criticism, any reader might wonder at the patchwork nature of the scriptures, their conflicting norms and judgements, outright contradictions, and bald errors." (Cahill, 245).

Cahill makes a case for believing that the God of the bible is true and has changed the course of history through the Jews. He even refutes several other ways of viewing the bible. But he does all this at the cost of sacrificing quite a lot.