"Leave Me to Myself!" 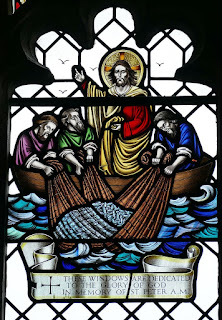 Has anyone ever given you such a costly gift that you suddenly felt terribly underserving? Like, why should I get so much? I don't deserve this. I wonder if that's what Peter felt when he and his fishing buddies caught so many fish that their nets started to break.

In that scene Peter falls at Jesus' feet and says something like, "Master, leave! I'm not worthy of all this." The Message says, "Leave me to myself!"

And Jesus doesn't say, "Will do," or "Actually, you are pretty unworthy." Instead he says, "Do not be afraid; from now on you will be catching men." (Luke 5:10c ESV) Jesus likens this catch to the future human catches Peter will haul into the Kingdom of Heaven. But this is far in the future.

Before that, Jesus will die to pay the price for Peter's unworthiness. After Jesus' death, he will rise from the dead and ascend into Heaven, so the Holy Spirit can fill Peter at Pentecost where Peter will preach the gospel. Here a great outpouring is given to Peter so he can pass on this gift to others. When Peter is imprisoned for preaching, when he is in chains and unable to spread the gospel to anyone other than the four soldiers watching him, an angel rescues him and brings him out to continue preaching.

I see a cycle in this story similar to the work that God does in our lives. Here's how it goes: God gave Peter much; Peter felt unworthy; Jesus made Peter worthy and able; Peter shared the gospel until he was imprisoned; God got Peter out and gave him more.

Here's how it seems to appear in our lives: God gives us an abundance; we recognize our unworthiness; our faith in God's work makes us worthy and able; we do good works until we run dry; God wakes us up and gives us more.

It's a cycle that perpetuates good works and faith at every turn. So why aren't Christians fountains of fruit. Well, I can think of at least four ways we exit this cycle. I'm sure there's more than four though.

Two: We believe that all these blessings are due to our own efforts or associations or wisdom. "We have Abraham as our father." (Matt. 3:9 ESV)

Three: We fail to give as we have been given. "As for what was sown among thorns, this is the one who hears the word, but the cares of the world and the deceitfulness of riches choke the word and it proves unfruitful." (Matt 13:22 ESV)

Four: We attempt to give to others from our own strength and supplies of goodness. "But there was a man named Simon, who had previously practiced magic in the city and amazed the people of Samaria, saying that he himself was somebody great . . . Now when Simon saw that the Spirit was given through the laying on of the apostles' hands, he offered them money, saying, 'Give me this power also, so that anyone on whom I lay my hands may receive the Holy Spirit.'" (Acts 8:9, 18-19)

Thankfully, there are multiple re-entry programs as well. At any point we can believe again that Christ's work makes us worthy, is the reason for all our blessings, and gives us enough to give to others. At any time, we can remember how we have "toiled all night and caught nothing." (Luke 5:5). And at any time we can remember his command and let down our nets once more.