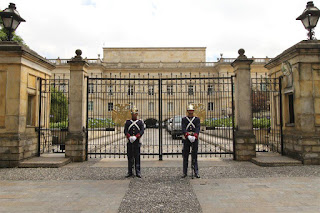 You posted watchmen at every gate, determined to mark the enemy before he marked you. Those cinematic sins wouldn't get past your gates, not while your watchmen stoically stood by keeping out drug addiction and adultery, bigotry and sexism, wastefulness and homelessness. But the Devil is no amateur adversary. He brought no battering rams or siege towers. No, he knew your blind spots, and subterfuge was his game. With only the subtlest of suggestions, he means to collapse the whole city.

But you are not without a helper.

So to the one berating herself on her weak show of faith, who feels the strain of demanding more and more of herself. To the one who knows that serving Christ should bring her joy but feels nothing but drudgery. Who wants to enjoy a hobby or dessert or TV show, but who can't sit down for fear that she's acting selfishly. "You should be doing better," the lies say. "You should do more."

To the one systematizing her triumphs, who is so enthralled by how well a book spoke to her or a wise suggestion took root that she writes up her success as the prescription that would cure others. To the one who wants order so desperately that she will lay her own grid of well-being upon her friends and spouse and parents. To the one who believes that lie: "You might have the key to cure others."

To the one second guessing all his choices, frazzled by every new crime and disease and catastrophe. Who fears the not-yet-known regarding a decision he must make. Who fears that if he plays his cards too soon, he'll miss some vital piece of information that would prove his play foolhardy. Who feels that if he were just given the space to ask more questions, talk to more experts, research more sites, then he could play his set of hearts or discard that two of diamonds. Who has come to believe the voice that says, "If you only got more, you'd have enough to decide."

To the one hurt by others words, offended and scandalized, sure that other's oversight or ignorance or stupidity or sin ought to be addressed. To the one fiery inside with the will to point and call what has been done to her unfair play! To the one drawing up battle lines and writing up proclamations because she believes that she holds the gavel, and it is her responsibility to sentence those who've hurt her.

To the one stuck viewing himself out of others' eyes. Who is anxious after he hangs up the phone or leaves a meeting or clicks "post." Who is forever wondering how he will be viewed. Will they think him vain? Dramatic? Shallow? Sulky? A complainer? Might he be criticized or judged for what he has done or said? What will people say?

To the one who feels she is stepping on egg shells around her family or spouse or children. Who is bracing herself for an explosion or vicious accusation or dramatic remonstration. Who chooses her words ever so carefully to keep the dragons of wild emotions at bay. Who is always reframing her words to sound easier or kinder or gentler than they are. Who will take all manner of difficulties onto herself to prevent those she loves from having to handle their own disappointments or suffer through the consequences of their own behaviors or to experience the trials of life.

What use is it to say we have the sword of truth but we do not use it against both the obvious temptations and the subtle whispers of the devil who would see us fail in the invisible dark places of the heart?

(Click here for Part I of Answering the Lies )