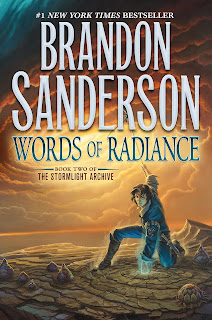 I just finished reading the second book of Brandon Sanderson's Stormlight Series. These books are mega-huge, over a thousand pages each. And I could write blogs and blogs about some of the inspirational gems of truth in them.

These books have ability-enhanced swordsmen and unearthly creatures, mystical gods and epic battle scenes, knights and heralds and surging crystals with magical powers. I wouldn't necessarily recommend them. This guy has invented his own nations, languages, texts, alphabet, animals, plants, ships, underclothing, everything. It was rather tedious getting into the first one. In fact, I didn't start to like it until I was two hundred pages in.

But yes, they were worth the hours I spent reading them, and now I understand why my husband and his cousin were glued to them before I read them.

I especially like the heroes in them who trained so long and so well at a particular skill that their muscles just acted instinctively in battle. There's this spearman named Kaladin who is so good with a spear that his basic kata drills make his men wonder who is he and how did he come to be so good. There's an old weathered warrior named Dalinar who, although he's trying to retire from the battlefield, still instinctively moves his body like a warrior on and off the battlefield.

These men train and train and train so that when they're in dangerous situations, their bodies just know what to do. They don't have to think about it. And I couldn't help but think about the spiritual battle that we're in and how outrageously flabby our spiritual muscles are. The enemy attacks and we're like "Ugh, too tired, must watch TV and eat candy."

What if we trained to do what's right in the little things so that when big things happen, we just acted instinctively. That sounds like a good idea. Huh. But training our moral muscle is tedious and hard and boring. It just doesn't feel like there's a glorious payoff this side of heaven. Like, scouring the sink, what does that yield? Yeah, a clean sink! It's so sparkly. I sometimes wonder if I'm the only one who cares. Or practicing not shouting at the children or biting my tongue when someone says something offensive or considering other people before myself; usually the big pay off at the end of the day for doing those things is me exploding and telling Philip, "You take care of these little people! They're making me crazy!"

I want to be a spiritual ninja. But I can't even manage the training. I can make my physical body to the right things but I do them to get some recognition or time to myself or assurance that the future will be okay or appeasement to the guilt in the back of my mind.

So training my moral muscle by just making myself do the right thing. Doesn't work. I think the training must be different. I think it must be linked to what Jesus says to his disciples when he urges them to abide in him. Abiding. Training.

Learning to abide in the Lord is like practicing my spiritual kata. Abiding is what happens when we instinctively know, this situation is more than I can handle, and we invite the lord into it with us.

The Stormlight Series has these creatures called spren and after reading over two thousand pages, I still can't really tell you what exactly they are. But the best I can understand is that they represent human values and emotions as physical manifestation. They appear like colored flying ribbons. And this spearman, Kaladin, is given superhuman abilities because he bonds with an honorspren. I'm not worried about spoiling the book by telling you this because, chances are, even with these explanations you will still feel lost reading them.

Anyway, his powers only work with this spren, this spirit, so to speak, united with him in keeping his promises to protect the weak and even to protect his enemies. And if that isn't the key to life veiled in a thousand-page-fantasy-novel, I don't know what is.

Our power in this world comes from being united with the Holy Spirit within us. I don't mean some sort of yoga or "being true to your heart" Disney stuff. I mean in admitting in each and every situation that we need God Almighty's help.

Surrendering ourselves to God in every situation is like giving our newborn spiritual bodies the muscle memory to fight a glorious battle for the right reasons.