Before and After Dumpster Diving 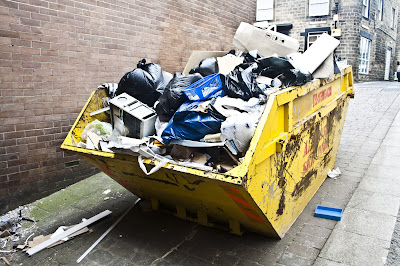 Before the adoption, you dug in the trash.

Before, you found your meals at the bottom of dumpsters, and the food you found was rotten and dirty and caused indigestion for several days, but it was all you had.

Before, dumpster diving was your livelihood. You searched the garbage ravenously. You craved spoils. And when you found them, you clutched the scraps close. You hid and ate them, always keeping a wary eye on the alleys and skies lest a beggar or crow or stray dog steal them from you, steal what you had stolen.

Before, you had nothing and had to scavange to survive.

After, you had everything you needed and more.

After, you ate at the king's table, which was spread with an abundance of food from his farms: pies and pastries, roasts and cold cuts, salads, fruits, and cheeses. Everything you could ever imagine was there.

After, you were provided with more than what you needed: food, clothes, protection, friendship. And dessert.

After your adoption papers went through, your debts were paid and new clothes were given to you. You washed and put them on and said goodbye to that street life of stealing and hiding. You had no need to dive into trashcans, although every time you passed one, you had to stop and remember, "I don't have to do that anymore."

Before, you wondered, "Well, if I live in a palace and have freedom to do whatever I want, why not go dumpster diving in the richest garbage ever?"

After, you knew why you didn't.

Before, you said, "If that's how grace works, why not just go on sinning?"

After, you didn't think that anymore. You didn't wonder about that. You knew. That old ways of getting your needs met weren't needed anymore.

Before, you had to do it.

But now, you know you don't have to anymore. Everything you ever need you now have.