By Abigail Joy Stevens April 27, 2021
It's hard to accept anything from people we judge as selfish or immature or ruled by passions or fool-hardy or unjust. 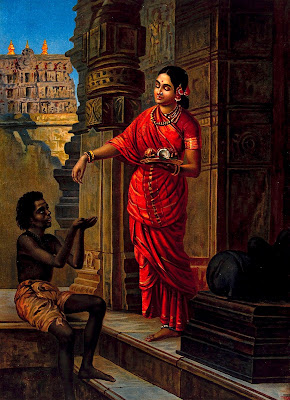 I remember complaining about my parents while living under their roof and eating their meals and benefiting from their generosity. My heart didn't feel right within me. I had to invent ungodly reasons why they were generous in order to justify my judgements because the two simply couldn't co-exist: a critical spirit and acceptance of kindness.

When we criticize and judge other's hearts as being more wicked than our own, we place ourselves above them. It's like we become a judge with a gown and wig in a courtroom. Those we judge become the lowly hand-cuffed accused. The judge stands on the platform looking down. He holds the gavel. He declares the verdict. "You're not doing life well enough!" "You should be making the same decisions as me!" "You're not worthy!"

The acceptance of gifts levels the playing field. It says, we are the same. We stand beside one another and that is why I can pass on this gift to you.

Of course, gifts given or received in a spirit of pride don't feel like this. Those feel like a king giving to a beggar, especially if the king only gives and the beggar only receives. The problem is not that the king is more wealthy. Some people have more material wealth, wisdom, or information to give. The trouble comes when the king believes the beggar has nothing to offer him. Then the two can never be equals. And yet, even when a gift is given or received in the wrong spirit, the giving can be good, but this is a topic for another post. (Are All Gifts Good)

Likewise, so long as we stand in judgement over God, we cannot accept his grace: his son's righteousness in place of our own. So long as we are hold it against God that he allowed certain things to go as they have or because we don't think he has repaid us for our good deeds or we don't agree with the way he demonstrates justice in this world, we will have a very difficult time receiving his grace, which is a gift we cannot afford to reject nor can we ever understand God's economy without it.