The Oath-Bringer God of the Old Testament 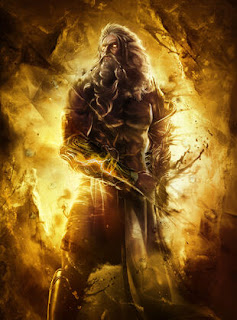 I've been going through the Old Testament with my kids. We've finished Genesis and Exodus, skimmed through Leviticus, and now we're on Numbers. And let me tell you, this God of the Old Testament is no joke. At one point Rose turned to me and said, "This is not God!"

It definitely doesn't seem like he's gracious and merciful, slow to anger and abounding in steadfast love. This Old Testament God strikes the Israelites with plagues for disobedience. He commands his people to stone someone for collecting wood on the Sabbath. He gives Mariam a skin disease when she undermines Moses authority.

One: My sin is much worse than I realize.

Two: I can't survive in the presence of a Holy God.

Three: I need protection from him.

The trouble comes when I think God must be like me.

For example, when the Israelites grew sick of manna, they complained to Moses (Numbers 11: 4-6 NIV). So God gives them quail and then strikes them with a plague.

I can relate to God a bit here. I give my children good food to eat. And when they complain about it, I get really mad at them. But I don't strike them dead.

Often, this is how we translate God: based on our own experiences. So in a case like this, God seems unnecessarily brutal. However, likening God to ourselves doesn't work. Here's why.

First, I and my children are both humans. As humans, we can live with all sorts of contradictions within us. God isn't human. God can't do that.

If a human exercises his or her power in anyway—through words, actions, or desires—God is the one who makes that power manifest itself in the world. He makes sure all our words, actions, and desires have weight in this world. We cannot be in his presence and say things like "I want candy everyday!" without those words having actual consequences.

I hate to use this analogy but bear with me for a sec. It's like God is a genie and every time someone makes a wish, God makes that wish come true. No one can say a wish around him and not have it come true. It's his nature. Okay, now forget that analogy.

God is the enforcer, the truth-upholder, the actualization of all we as human do. If we say, "God's food is nasty. I don't want to eat manna another day! Take me back to Egypt!" He must hold us to that. He can't just let it go without someone paying the price for the rebellion or the lie. Actually, another option is for God to let that person go back to Egypt, which is basically Hell.

God didn't want to abandon his people nor did he want to send them back to Egypt. So, God gave them what they asked for: a horrible plague for wanting Egypt's food more than God's food, non-entry into Canaan when they said they wanted to go back to Egypt, a plague on those who incited the people against Moses, defeat in battle for those who tried to conquer Canaan without God, and stoning of someone who worked when God said rest.

Thus, the Israelites and, I should now say, Americans too need protection from the Oath-Bringer who must see to it that our decisions, desires, and words actualize themselves in his eternal kingdom.

The Oath-Bringer God of the Old Testament is very real and very dangerous. But we have protection to stand in his presence as rebels through Jesus' blood. Thus, let us work out our salvation with fear and trembling for it is God who works in us to will and to act according to his good purpose.