Comstock Chronicles: How The Children Play 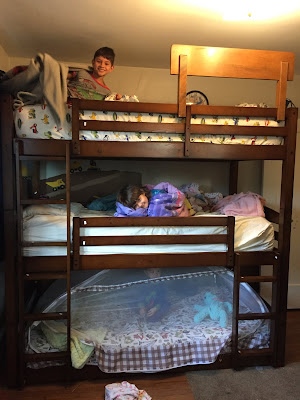 As you can imagine, my three children have become quite close over the last year. Lee and Rose are best mates. They call each other "honey" and pretend to be running a house until Lee can't stand it any longer and ends the game with a tornado or an enemy attack. He is an excellent example of why it's not good for boys to do domestic things for too long.

At night, they crawl into each other's beds by way of the gap they've created between the wall and their triple bunk. They seem to like this self-made chute better than the highly accessible ladders. They would sleep in one another's beds too except I usually catch them at it. Since this picture was taken, Lee now sleeps on the bottom, Benny in the middle, and Rose on the top. This makes their vertical highway between one another longer.

When Lee has gone up to my parent's cabin for the night or when Rose has a slumber party at Grandma and Grandpa Stevens' house, there is a chilly atmosphere between the two of them for a day or so. It's as if they felt betrayed by the other and are now making plans to kill each other. How dare you go off and have fun without me! How dare you experience things that I will not. Eventually, the hatred burns off and they realize that they don't have many other options for play-mates, so they might as well get on with it.

They like to have their own games apart from two-year-old Benny, but they are both softies too, and if Benny cries or begs, one or the other gives in and allows Benny to have some part of their game. This doesn't last long because Benny cannot maintain their sort of play for as long as they expect him to. Eventually, he will grow bored and wreck their tent or get into their private toy shelves or go play with the sink water in the bathroom. 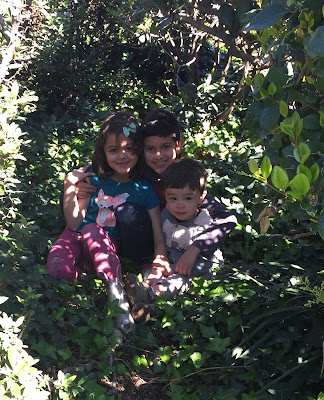 They compete the most in their made-up games. Rose can out talk Lee, even if most of it is nonsensical, and when Lee grows tired of talking, he adds physical chaos. He'll chuck his comforter into the air so that it lands on both their heads. He will wrap himself in sheets and bulldoze into the scene where they were arguing. Or, most cleverly, he'll announce a new objective to their game, which would, if Rose takes the bait, send them careening across the room to a new location.

Naturally, the one declaring the object of the game makes the objective one that they will achieve before the other. Often times the other participant won't even attempt to win, but rather declare the next objective and win that one instead. It's a game of equal winning, I suppose, until one gets tired of it or it degrades into arguing. 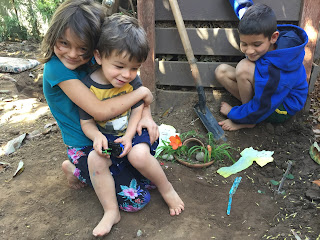 Rose, who I think is an Enneagram 1, is the most affectionate to her brothers when they are ill or injured. Then she can play mother to them and order them about: sit here, put your feet up, and drink this. And Lee, who I believe is an Enneagram 7, is the most kind to Rose when he feels he has an abundance of fun. One day he paid me twenty bucks to eat as much candy as he wanted and before thirty minutes was up, he'd split his booty with Rose. When he gets to go to a boys-only birthday party, he begs for Rose to go too, and if she can't, he promises to bring her back a slice of cake. But woe betide if Rose gets to do the fun thing without Lee. She will be smug and he will be angry. And woe betide if Rose is injured or sick, and Lee is expected sympathize and cater to her needs. It just doesn't go the other way.

As Benny has grown more independent and verbal, he has become Lee's second best playmate. Unlike Rose, Benny will play scooter-chase with Lee, and monster and digging trucks and nerf guns. Of course, the battle games are unbalanced, as Lee is nine and Benny is two. But Lee doesn't seem to care. He will cock Benny's nerf gun for him, hand him the weapon, and then flee as fast as he can before Benny shoots him in the back. And since Benny cannot re-cock his gun, Lee will return to do it again. Lee will lift Benny up into his hammock to swing him around wildly until Benny is so terrified, he starts to cry.

Rose has her Benny-only games too, which mostly involve putting Benny to bed in a house she has made with towels and bricks and baskets and plastic animals and stalks of mint yanked out of my herb garden. These games usually don't last long because how long can a two-year-old stand being put to bed? Rose then kicks him out and repairs the damage Benny has done to her perfectly arranged house.

I suppose I play house too. I try to domesticate these children, teach them how to properly clean the toilet or how to spell words or make peace with one another. I do it until I must kick them outside lest my nerves or the house fall to bits. 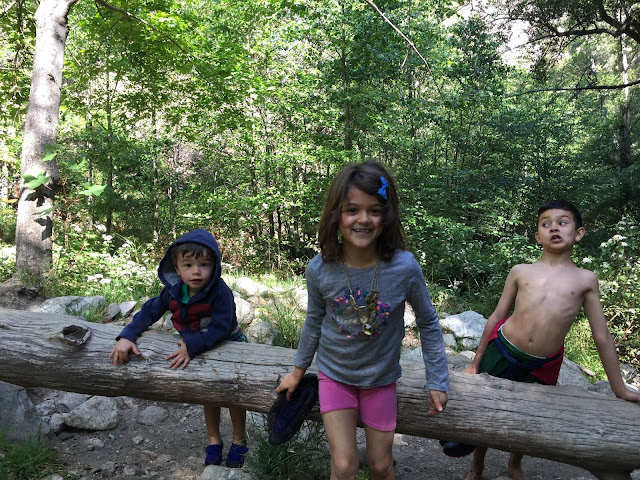